Phil Galfond’s Deuce-to-Seven Lowball victory was sweet, despite being far from his biggest cash take down. Galfond said he’s played for cash game pots that were bigger than his first place prize. (Image: WSOP.com/pokertube.com)

Phil Galfond is now part of the more-than-one-WSOP-bracelet club, and he’s damned excited about it. Who could blame him?

The World Series of Poker saw one of its strongest final tables yet this season on Monday, with one former bracelet winner topping another in heads-up play. And several other tournaments also worked their way down towards finding a winner, including the aptly named Monster Stack.

The $10,000 buy-in No Limit Deuce-to-Seven Lowball Championship was the event to watch on Monday, as just about every name at the final table was one that poker fans could recognize.

Among the six players who returned to the Rio on Monday, Erik Seidel, Eli Elezra, Nick Schulman, and Phil Galfond were all looking to add to their collection of WSOP bracelets, while Dan Smith and Jon Turner were looking for their first piece of gold.

Heads-up play came down to Schulman, who was looking to win this exact tournament for the third time in his career, and Galfond, who was trying to win his second overall WSOP bracelet. And while Schulman had a 3-1 chip lead and would have made for a great story had he won, it was ultimately Galfond who claimed the title and the $224,383 first prize.

Galfond noted that the relatively small prize pool (by WSOP standards) wasn’t going to reduce his excitement over the win.

“I’ve played for cash game pots the size of first place,” Galfond told WSOP.com. “This feels a lot bigger and I think it’s because of this stage and the bracelet. It’s more meaningful than cash games.”

From 7,192 starting players, the Monster Stack $1,500 No Limit Hold’em tournament has played down to just 29. And amid all of that chaos, a very familiar face has emerged with the chip lead heading into the fourth (and likely final) day of play. 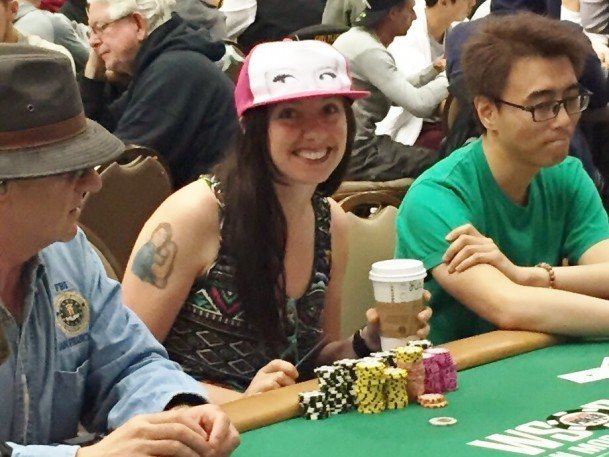 Jacki Burkhart, aka missjacki on the CardsChat forum, finished 45th out of a field of 7,192 for $29,710. She was Last Woman Standing in the massive tournament. (Image: Jacqueline Burkhart)

Hoyt Corkins bagged 9.3 million chips at the end of Day 3, putting him in the top position in the race for the $1,286,942 top prize. Corkins is a two-time WSOP bracelet winner with nearly $6 million in career earnings over a long career that stretches back into the late 1980s.

Few other notables are remaining in the field, but there is one other leader who has previous WSOP success. Asi Moshe is looking to win his second career bracelet and currently sits in fourth place with just over 5.5 million in chips.

Finally, we would be remiss if we did not recognize CardsChat forum member Jacki Burkhart’s accomplishment in finishing 45th out of a starting field of 7,192. Jackie was Last Woman Standing in this year’s Monster Stack, and takes home a nice cash of $29,710.

Kai Yang leads 21 remaining players in the $1,000 No Limit Hold’em event, which boasts a top prize of $353,391. He’s one of just two players who have over one million in chips, with the other being Artur Rudziankov in second place.

But you don’t have to look much further to find some big name pros who could make runs to the final table. Chris Moorman is currently in third place, while Bertrand Grospellier, Antonio Esfandiari, and Jason Koon are all still alive heading into the final scheduled day of play.

Just 17 players are still alive in the $3,000 Pot Limit Hold’em Hi/Lo event, with bracelet winner Mike Gracz holding a significant chip lead over the field. He’ll have to watch out for players including Jeff Madsen, the original David Baker, Robert Mizrachi, and Eric Wasserson, all of whom have workable stacks heading into Tuesday’s session.

The $5,000 No Limit Hold’em Six-Handed tournament began on Monday, drawing a respectable field of 550 players that included many professionals who thrive in short-handed situations. The UK’s Simon Deadman leads the way heading into Day 2, but there is a litany of professional players on the leaderboard: Tuan Le, Jennifer Tilly, Mike Gorodinsky, Sorel Mizzi, JC Tran, Matt Jarvis, and Jason Somerville are among those who have top 50 stacks among the 190 players remaining in the hunt for the $633,357 top prize.

Finally, 388 players turned out for the $1,500 Deuce-to-Seven Triple Draw tournament, with a rather memorable name from the past grabbing the top spot in the standings at the end of the first day of play. 2004 Main Event winner Greg Raymer is at the top of the field heading into Day 2, with Brian Hastings, Allen Cunningham, Matt Glantz, Vanessa Selbst, Todd Brunson, Brian Rast, and Michael Mizrachi all also in the top 30 among the 121 returning players.

Up to three tournaments could finish up on Tuesday, depending on how quickly they play down. The $1,000 No Limit Hold’em event with 21 players remaining will likely award a bracelet, and the same is true of the $3,000 Pot Limit Omaha Hi/Lo tournament that has 17 players remaining. Monster Stack may also finish up today, though players could be in for a very long session before those winners are crowned.

And since the action never stops at the WSOP, two more events will be starting up on Tuesday as well. The first is the $1,500 Split Format Texas Hold’em tournament, which uses a structure often called “mixed-max” in the poker world.

On Day 1, this tournament will start with standard nine-handed tables, while Day 2 will feature six-handed play. On Day 3, players will compete in heads-up matches before playing an eight-handed final table on Day 4.

Later in the day, there’s a $3,000 H.O.R.S.E. tournament that kicks off at 4 pm PT and it will be interesting to see the field size here. The $1,500 H.O.R.S.E. event drew well, attracting 772 players, so it is unclear just how stacked the tournament will become at double that buy-in.