Paul Hoefer has now joined the first-timers club at World Series of Poker 2015. Along with Andrew Barber, he’s just a little bit richer coming into this Independence Day. 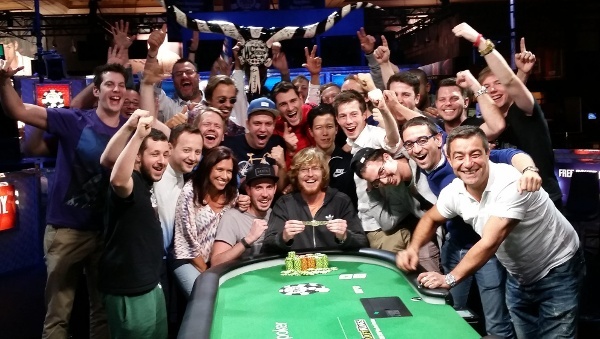 Paul Hoefer was supported by a huge German rail on his way to winning the Little One for One Drop title. (Image: CardsChat.com)

Preliminary events are finally wrapping up at the WSOP, with just a few more champions still to be declared before the Main Event, which starts on Sunday, completely takes over the Rio Convention Center. But before that happens, there are still some bracelets to give out, and two more of them were awarded on Friday.

Paul Hoefer Wins Little One for One Drop

Hoefer blitzed through the final table of the Little One for One Drop, winning $645,969 and his first WSOP gold bracelet. The win happened at a breakneck pace, as Hoefer took what had seemed like it could have been a long final table and busted his final four opponents over the space of just five hands.

“I think that it looked easy because I was running super well at the end,” Hoefer said after his win. “I think I played well and I ran pretty well, and that’s probably the best combination to win a tournament.”

No argument from us on that one.

Hoefer, a student who considers himself a recreational poker player, was supported by a rail that included some of the top German players in poker, including Ole Schemion and Ismael Bojang.

“It’s nice,” Hoefer said. “The German guys have one of the best groups. They’re all so good and all super nice guys that have come together over the last few years as a community. Now, it’s almost like a family.”

Andrew Barber has enjoyed some limited success at the WSOP over the course of his poker career, but never anything nearly as special as what he accomplished Friday night. Barber won the $10,000 H.O.R.S.E. Championship, taking home his first career gold bracelet and a prize of $517,766.

Barber, a 32-year-old PhD student, had plenty of top-notch competition to deal with at the final table. Scotty Nguyen, Frank Kassela, and Joe Hachem were among the former bracelet winners who reached the final table.

In heads-up play, Barber faced off against two-time WSOP winner Viacheslav Zhukov of Russia. But Barber, who held a massive chip lead through much of the later stages of the final table, was never intimidated by his opponents.

“This was a tough lineup, no doubt about that,” Barber said. “But I knew I could complete. I had played with most of these guys before, so it wasn’t new to me. I knew that with a break or two I could get here and win it.”

For most of Friday night, it appeared that there would be three bracelets awarded during the evening, as there was a third final table playing out simultaneously to the two above. However, the $1,500 Bounty No Limit Hold’em Event instead stopped with just Jack Duong and Vitezslav Pesta remaining to battle it out for a bracelet on Saturday.

The tournament halted with Duong holding a massive chip lead. He has nearly 15.4 million chips to just 965,000 for Pesta. But while Duong appeared ready to play an additional level last night to try to finish the event, Pesta did not agree, and the two players will now come back at 1 pm on Saturday to determine a winner.

Two starting flights of the $777 Lucky Sevens No Limit Hold’em event saw 4,422 players try their luck in one of the lowest buy-in tournaments of the series. By the end of the day, just 618 players remained in the field, with Sean Munjal, who bagged 159,300 chips in the early flight, leading the pack.

There are plenty of notables who made it through to Day 2 and will come back to try to make the money on Saturday. Some of the bigger names alive in the tournament include Kevin MacPhee, Ben Yu, Matt Matros, and Bryan Devonshire.

One of the most difficult events of the WSOP calendar also kicked off on Friday, as 108 players came out to compete in the $10,000 Dealers Choice Championship. This is the first time a $10,000 buy-in event had been held in this format, and the field that turned out was certainly worthy of the tournament’s championship billing.

By the end of Day 1, it was Matthew Ashton who grabbed the lead with 152,700 in chips. He is followed by a field of notables, as some of the names near the top of the chip count standings include George Danzer, Stephen Chidwick, Jeff Madsen, David Chiu, and Robert Mizrachi.

Of the 61 players returning to compete on Saturday, only 12 will make the money, with $319,792 going to the eventual winner.

John Esposito is looking to capture his second career bracelet 16 years after winning his first, as he leads the $1,500 Seven Card Stud Hi/Lo event with just 17 players remaining in the field. Esposito bagged 630,000 chips heading into the final scheduled day of play, putting him just ahead of Gerald Ringe and Chris George.

Several notable names are still in the hunt in this tournament, including Todd Brunson, Daniel Idema, and Owais Ahmed. They’ll all be seeking not only a WSOP bracelet, but the top prize of $180,943.

It’s likely that three more bracelets will be awarded today as the preliminary events start to wrap up at the WSOP.

The $1,500 Bounty tournament will declare a winner early in the afternoon, and the Seven Card Stud Hi/Lo should also play down to a winner at some point. In addition, the final six players from the first-ever$1,000 Online No Limit Hold’em tournament will come to the Rio to battle for their hardware as well.

But for the first time in weeks, there will be no new events added to the schedule Saturday. There’s only one more bracelet tournament on the docket: the Main Event, which sees its first starting flight begin at noon on Sunday.

While it’s certainly been a long and grueling WSOP, it’s also hard to believe that we’re just a day away from the start of the final, and biggest, event of the summer.

Go Go Any cardschat peeps in the Main Event……Take it down. Just as a side not Phil Helmuth will be at the final table…………….