WSOP NFTs for Sale at Auction, but Will They All be Moneymakers?
November 22, 2021 Business & Industry

WSOP NFTs for Sale at Auction, but Will They All be Moneymakers?

The WSOP is getting into the non-fungible token game by offering poker cryptocurrency fans one-of-a-kind digital artifacts. 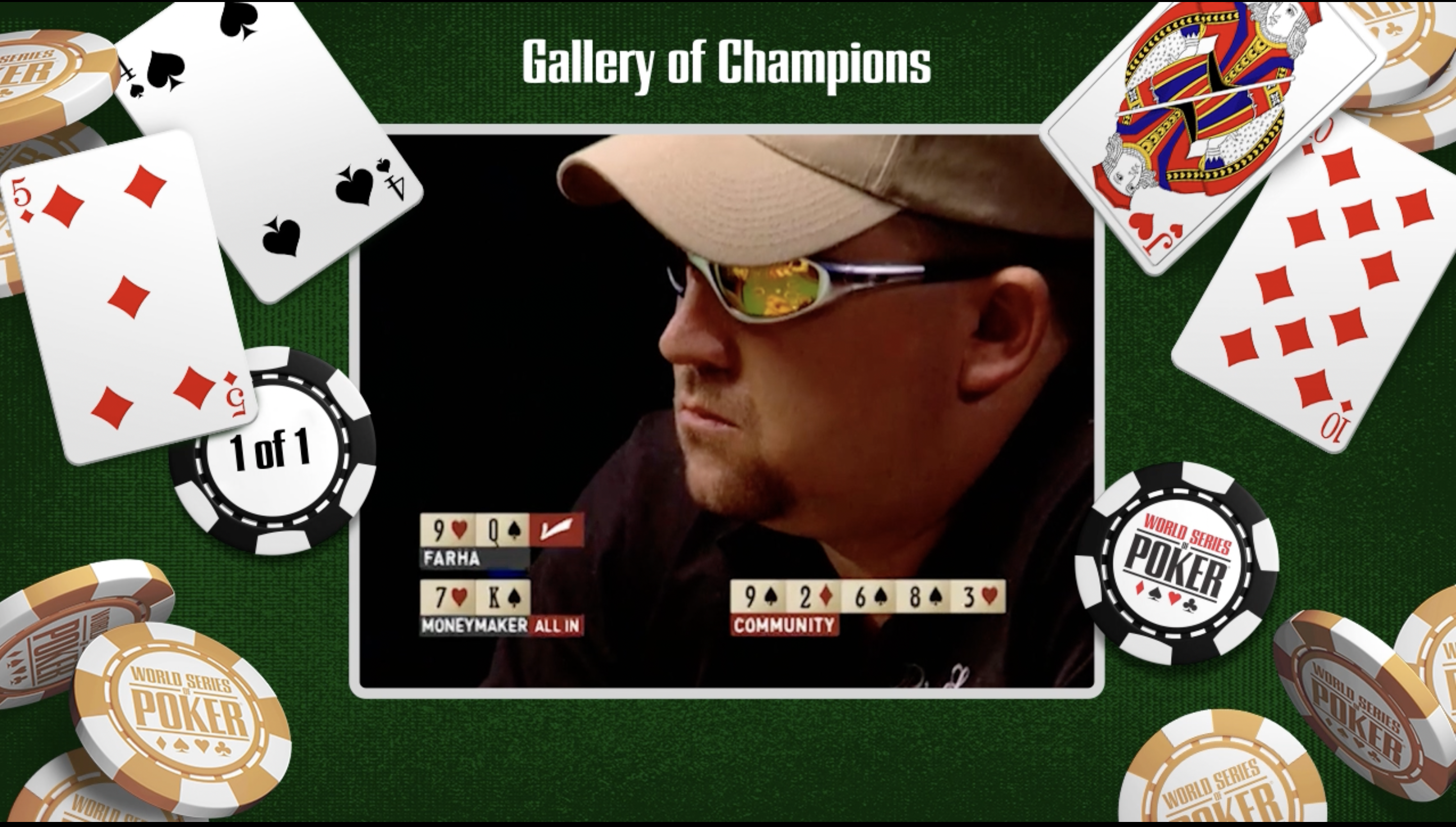 We all remember Chris Moneymaker’s bluff against iconic gambler Sam Farha in 2003, but only one person will be able to own it as an NFT. (Image: WAX.io)

The auction is now open for a 46-second video clip of Chris Moneymaker’s “bluff of the century” in the 2003 WSOP (and the winning hand that followed). This bit of ESPN footage is the first of six WSOP NFTs being minted by the Worldwide Asset eXchange (WAX) and made available to the public.

Each new NFT will be made available for auction on Mondays and Wednesdays until Dec. 6.

Other iconic video clips heading to auction include Stu Ungar’s “When the kid became a legend,” which will be released today, Phil Hellmuth’s “The Poker Brat” on Nov. 24, Scotty Nguyen’s “You gonna call, it gonna be all over, baby” on Nov. 29, Doyle Brunson’s “Texas Dolly’s 10th bracelet” on Dec. 1, and Johnny Chan’s “Orient Express, back to back” on Dec. 6.

The Moneymaker NFT auction ends on Wednesday and bids have already hit 1,030 WAX, which translates to roughly $780 at the time of publication. The WSOP and WAX only minted one official NFT for each of the six legendary poker moments.

The Art of Poker NFTs

The Moneymaker clip — like all of the others heading to auction — is something most poker fans have seen before, and is available to view at anytime online with one quick web search.

The NFT version now on auction is framed with the famous WSOP logo and grass-green digital felt, and looks not too dissimilar from the generic clips available for viewing online.  So, what makes this video clip worth anything, let alone hundreds of dollars? And what makes people buy other clips and drawings of things like apes for 10s, 100s, or even millions of dollars?

Because they’re limited editions and, sometimes, even one-of-a-kind. NFT enthusiasts contend it’s similar to owning an original painting by Monet or Picasso when you hang a print on your wall for far less money.

Although clips like those featuring Moneymaker, Brunson, Chan, and others may not seem unique because they can be found practically anywhere online, the NFTs on offer by the WSOP are different because they were created on WAX’s blockchain, which means they come with proof of ownership that can be bought and sold online.

In theory, the rarer the NFT, the more valuable it can be.

According to Reuters, sales volumes of NFTs have jumped from $1.3 billion to $10.7 billion — just from the second financial quarter to the third financial quarter in 2021. That’s a lot of people with a lot of money in virtual wallets buying “art” and old sports clips, among other things.

Because NFTs can be anything digital, from jpegs to audio clips or even screenshots of Tweets, people are minting them in hope that they will appeal to buyers and collectors with bucketloads of crptyo like Bitcoin or Ethereum, which currently trades at more than $4,200, will find value in the rarity of these various “moments” and collectibles.

For example, one NFT featuring LeBron James from the 2020 NBA Finals was officially minted by the NBA for its Top Shot collection and sold for a record-breaking $230,000 in April. Many other Top Shot NFTs have sold for more than $100K each, and they’re not even absolutely unique. The NBA mints between 50 to 1,000 of these moments, depending on the clip.

WSOP Bracelet winner Jordan Morgan recently traded an NFT of a cartoon drawing of a primate in sunglasses and bunny ears for another drawing of an ape for six Ethereum. That’s more than $24,000 in real US currency.

Thanks for the memories #4818, we had a hell of a run. Now it’s time for #230 to shine #NewProfilePic pic.twitter.com/UrdktWDmeI

It doesn’t hurt that celebs like Jimmy Fallon have pimped the apes from the Bored Ape Yacht Club on his show and social media. Consisting of 10,000 drawings of apes with different “properties” that raise the values of the pictures, they are available on the NFT interchange OpenSea.

The most paid for an NFT so far is $69.3 million for a piece of digital collage art by a guy who calls himself Beeple. His Wisconsin driver’s license reads Micheal Winklemann.

The man who bought Beeple’s Everydays: The First 5,000 Days, Vignesh Sundaresan, calls himself a cryptocurrency “angel investor” and entrepreneur who founded several cryptocurrency companies, including one that set up Bitcoin ATMs in countries around the world.

Although he blew all that headline-grabbing money on a piece of art that can only be displayed using a monitor, Sundaresan has a warning to those who think they can get rich on NFTs. He told Bloomberg in an interview that people who are trying to profit from NFTS are “taking a huge risk.”

Calling NFTs a technology that will help spur a “new patronage movement for artists and other content creators,” Sundaresan says those wanting to get into the market should do so at their own risk, as the hype will eventually fade and prices will come down except for the rarest of items.

“It’s even crazier than investing in crypto,” he said.