Winning 16 bracelets has earned Phil Hellmuth the right to get away with certain antics at the WSOP, but it seems some people are tired of his penchant for dressing up at the Main Event. 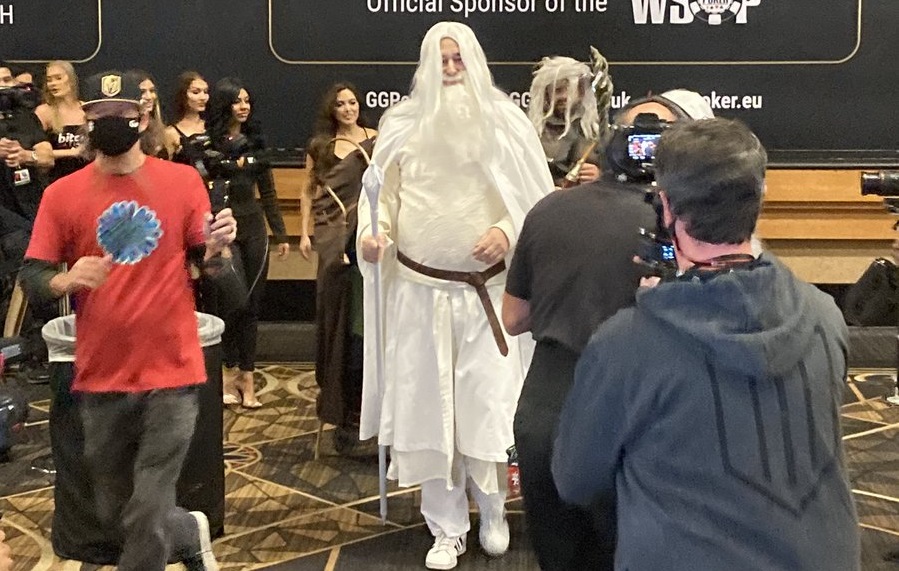 Phil Hellmuth continued his tradition of making a grand entrance for the WSOP Main Event, but are his theatrics becoming a bore? (Image: Twitter/GGPoker)

The self-styled Poker Brat has made a tradition out of being unfashionably late for the WSOP Main Event over the past number of years. We say unfashionably late because his entrances are often accompanied by some theatrics and a costume of some description.

This year was no different. Hellmuth anted up on Day 1F of the Main Event, but not before strolling into the Rio wearing a wizard outfit. The “theme” was white magic, which is why Hellmuth appeared as Gandalf from the “Lord of the Rings.”

Has the Hellmuth show jumped the shark?

WSOP regulars have seen this schtick before and know that it’s just a bit of fun for the 16-time bracelet winner. Hellmuth also puts time and effort into making his costumes as impressive as possible, so he’s certainly not dressing up on a whim. For some players though, the spectacle is wearing thin.

Remko Rinkema, senior media manager at PokerGo, tweeted an image of Hellmuth’s entrance with the caption “I feel physically ill from the levels of cringe right now.” Another industry member, Jessica Welman, was even less impressed.

“That Hellmuth entrance is just the latest example that the WSOP is a brand that feels really tired right now,” she tweeted.

It’s not just members of the poker media who felt uncomfortable. Twitter user @1flapdown77 asked why, of all the people who knew about the stunt, didn’t anyone stop Hellmuth.

Steven Madara raised another interesting point. He noted that neither Hellmuth, nor his entourage, were wearing masks as they walked through the tournament area.

“So we all get yelled at for not wearing [a] mask when not seated at tables, yet his whole pack of girls walk in fine with no mask? I guess his beard is enough of a mask,” Madara tweeted.

Costumes create a talking point at the WSOP

There are, of course, people who see the funny side of Hellmuth’s antics. Dan “Jungleman” Cates certainly did as he walked alongside Hellmuth dressed as Sauron. So, if Hellmuth was looking to create a talking point, he certainly succeeded.

why so many haters? this is fucking badass lmfao he obviously put a lot of effort into this unlike the typical city streets of any American neighborhood in Halloween anymore, somebodys gotta keep it alive.

The debate, however, really isn’t whether or not Hellmuth’s costume looked good; it’s about whether it fits with poker in 2021. When the WSOP hit a peak in the mid-noughties, such theatrics were a great way for players like Hellmuth to raise their profile, get extra TV time and, in turn, make the Main Event a spectacle.

If we look back over the years, Hellmuth has made some memorable entrances:

All Hail Hellmuth at the 2009 WSOPE

Even if we accept that costumes were fitting when poker was in its infancy, they were already feeling forced in 2018 (see Tweet above). During an interview ahead of his Thor-themed entrance, Hellmuth said that 10% of him feels embarrassed when he enters the Rio. Despite that, he persists. The trouble, however, is that the WSOP has become more corporate, particularly since Black Friday.

Professionalism has become the order of the day, and there’s a desire within the WSOP to partner with mainstream brands. That doesn’t mean there’s no room for fun, but there a certain people who feel the vibe is different now, and Hellmuth pretending to be Gandalf doesn’t necessarily fit in.

The counterargument is that, for better or worse, Hellmuth’s antics generate interest in the WSOP Main Event. Indeed, media outlet LADbible covered the walk-in, which means it will be seen by people outside of poker. Moreover, with 16 bracelets, Hellmuth has probably earned the right to steal the limelight in any way he chooses.

However, there is a feeling among some that it’s all become a bit passé. What do you think? Is it time he hangs up his costumes or should Hellmuth keep indulging his playful side?

The problem is that he,s really gonna look foolish when he goes on one of his rants .

Haha the man is a brilliant entertainer. That requires effort. I love it.