He’s famous for trying to bluff referees with his theatrics on the soccer pitch, and now Neymar is putting his acting skills to good use at the poker table. 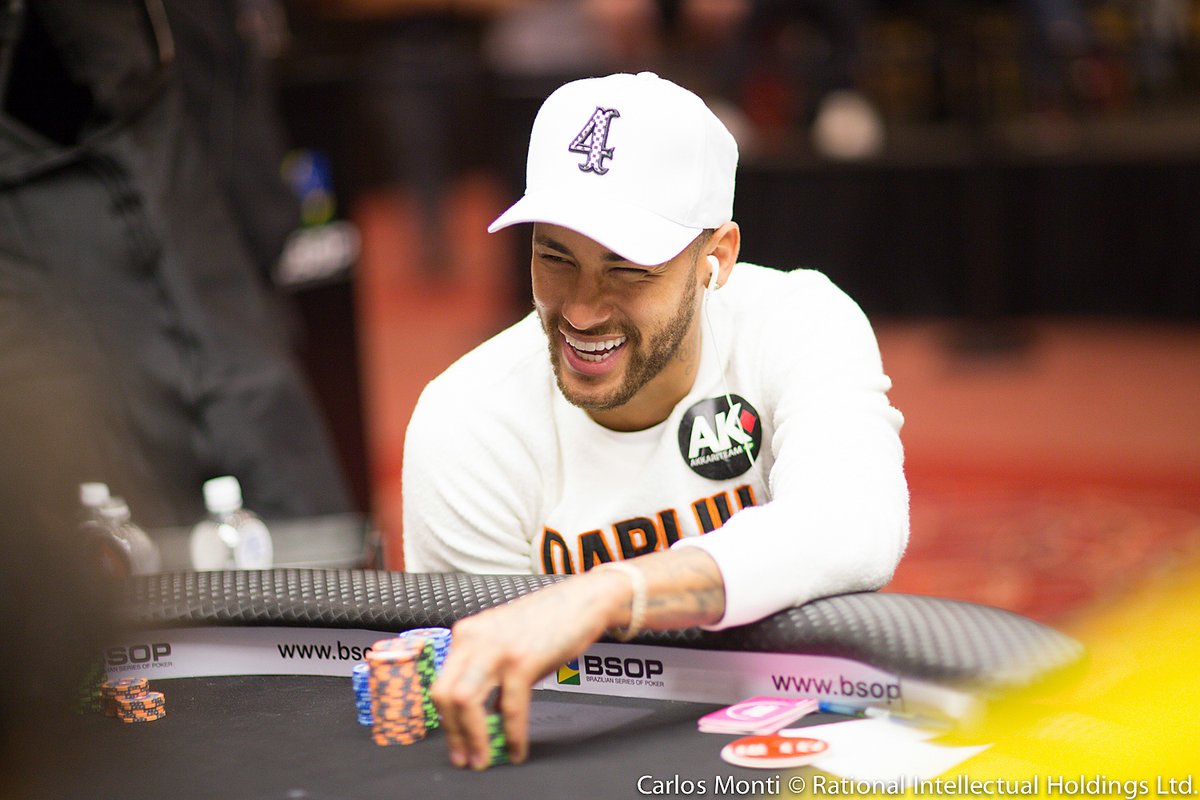 The Brazilian soccer superstar put in an impressive showing this week at the Brazilian Series of Poker in Sao Paolo, making the final table of a higher roller event.

“I’m very happy to be playing this tournament for the first time and for reaching the final with some great players,” the 26-year old told Reuters ahead of the final table. “This is a new experience for me.”

Neymar bought into the event for USD $1,877 and ended up finishing in sixth place for $21,308. That cash is a drop in the bucket for a guy who is expected to earn $42.9 million playing for Paris St. Germain this season, but it was an impressive run considering the tournament had a field of 288 entrants.

Things were looking good for Neymar early on at the final table. He got his pocket eights in preflop versus Ace-Queen suited, and the board ran out jack-high with four hearts. Neither player held a heart, and the eights held.

However, he found himself in a much worse spot on the hand which eliminated him from the tournament. The Brazilian got all his chips in with Ace-10 on a 10-high rainbow flop. Unfortunately for him, his opponent rolled over pocket Jacks.

The board bricked out and Neymar had to settle for sixth place.

The final table for the high roller event was actually supposed to be played out on Tuesday night in Sao Paolo. However, Neymar was slated to be the best man in a friend’s wedding that night, so the rest of the players graciously agreed to postpone the event by a day.

You can watch the entire final table stream (in Portuguese) here.

From  Field to Felt

While he’s better known for his flair on the field, it’s fair to say his form has been better on the felt of late.

Neymar faced heavy criticism for his performance during the recent World Cup in Russia. Not only did he fail to help the favored Brazilians get past the quarter finals, but he was blasted for his frequent diving and overacting as he attempted to draw penalties from the referees.

Earlier in the year, he was criticized for missing his club team’s championship match. Paris St.-Germain won France’s Ligue 1 7-1 over Monaco in April without his help. Sure, Neymar was injured at the time, but he didn’t even bother to show up for the match to support his team mates.

What was he doing instead? Grinding poker tournaments on PokerStars back in Brazil.

While nothing has been confirmed, most expect that the soccer superstar won’t return to Paris for a second season.

Neymar, apart from being a super star in football, has shown that in the poker cloths he also has skill, and a great table in an elite tournament, congratulations and we hope to see him in an EPT

“He’s famous for trying to bluff referees with his theatrics on the soccer pitch, and now Neymar is putting his acting skills to good use at the poker table.” LOL.