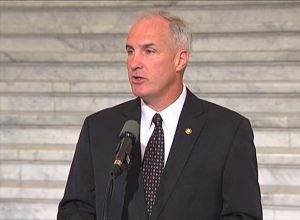 A bill that seeks to impose a blanket ban on online poker, and online gambling in general, in Pennsylvania has been introduced to the legislature, as State Representative Thomas Murt issues a challenge to the ongoing effort to legalize and regulate.

House Bill 1013, which has been signed by seven sponsors, including Murt, would prohibit the Pennsylvania Gaming Control Board from “promulgating” any form of rules or regulations that would permit any form of internet gambling.

“No individual or entity shall solicit, invite, collect or accept cash or any other form of currency through the Internet for the purposes of wagering or betting,” states the two-page-long bill.

“No individual or entity shall organize, or cause to be organized, any type of gambling event that is held over the Internet.”

Those who do, proposes HB 1013, should receive the relatively lenient fine of up to $300, with the penalty increasing to $600 and a possible three-days in jail for second offences.

Third and repeat offenses would be considered a third degree misdemeanor and would be punishable by a fine of up to $2,000 and up to a year in prison.

The bill has been referred to the House Gaming Oversight Committee, where it is likely to be received coolly. The committee is composed largely of those who are sympathetic to the idea of regulation, and its chairman is State Representative John Payne, whose own bill to regulate online gambling in the state was heard by the committee last week, and was well-received.

Meanwhile, Tina Davis, who not only co-sponsored the Payne Bill but has also introduced one of her own, is also a member.

Also, last week, the committee comfortably passed a resolution urging the state’s delegates in Washington to defeat the Restoration of America’s Wire Act (RAWA), the bill, introduced by Representative Jason Chaffetz (R-Utah), that would prohibit online gaming on a federal level.

While the resolution is largely symbolic, designed to create political awareness of RAWA, it’s thought that it may be also a contingency tactic to put Pennsylvania in a stronger position to lobby for exemption from RAWA in the unlikely event it is signed into law.

The text of Murtz’s bill, meanwhile, is identical to a bill from 2013 presented by Representative Paul Clymer. That bill made never made it past the Gaming Oversight Committee, and it would seem that Murtz’s facsimile is even less likely to do so, as the push to establish a legal framework for online gaming in the state begins to gather pace.

It begs the question, then: why file a bill that has absolutely zero chance of passing?

State Representative Thomas Murt STAY OUT OF MY LIFE!!

because he’s a politiician and such a move will gain him a few more votes next round from sympathisers, even if the law is changed to allow on line gambling