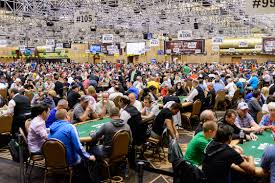 Cash games at the WSOP are thriving, but in reality Nevada now has the fewest poker tables in a decade. (Image: allinwithbrandon.com)

Las Vegas’ top poker rooms may be bursting at the seams at the moment thanks to the hordes of players that have descended on Sin City from across the world with dreams of enrichment at the World Series of Poker this year, but this belies a wider and disquieting truth.

Nevada’s poker rooms collectively amassed $8,511,000 in April, according to the latest figures released by the state gaming commission this week.

That means that revenue from live poker has declined, year on year, for the previous 12 months straight.

And while some poker rooms will be adding extra tables this month to accommodate the horde, the reality is that the actual number of poker tables in Nevada operating during April was the lowest since March 2005.

Fewest Number of Tables in a Decade

Seventy poker rooms spread games across 652 tables during the month. In March 2005 there were just 632, but this was as the poker boom was just kicking in, and live poker was on the up, spurred by the popularity of TV poker and online satellites feeding live tournaments.

The previous two years had seen an unprecedented interest in the WSOP, as Chris Moneymaker and Greg Raymer had won the titles, in 2003 and 2004, respectively, and tournament fields were burgeoning, feeding cash games across the state.

Now the pendulum is swinging the other way, and live poker in Nevada is in a state of decline.   This is reflected by a recent spate of poker room closures, because, let’s face it; the fact is that replacing these poker rooms with rows and rows of slot machine is far more bankable for casinos.

Hooters became the second casino in Las Vegas to shutter its poker room this year, and the 14th over the past two and a half years.

Reasons to be Cheerful

However, while poker may need an unlikely Chris Moneymaker moment to drag itself out of the doldrums, it’s not all blanket gloom. The WSOP is expected to be the biggest for some time this year, as evidenced by the 22,000-odd that turned out to play the Colossus.

The WSOP is desperate to bring the recreational players back into the game, and has increased the number of affordable buy-in, big-field tournaments on the itinerary.

While this is unlikely to ignite a second poker boom overnight, it’s a good place to start and a few more years of this may yield the desired results.

Another reason to be cheerful is that the Mirage poker room has reopened after a four-month break, albeit with fewer tables than when we last visited.

What will be interesting to see is whether cash game revenue for Nevada during the Series this year eclipses that of last year. The WSOP has been driver of growth in the past, and positive figures could be indicative of the very first step of a very gradual recovery.

Something that has not been mentioned is where the figures for machine-driven poker rooms is factored in … if they are even considered. Last year Circus Circus Reno closed it’s poker room and gave the space to Keno expansion and Sports Book. Next door, the Silver Legacy changed it’s poker room into a poker machine room with no cash tables and only infrequent tournaments.

Here in Palm Desert/Palm Springs area of California, Spotlight 29 closed it’s poker room late last year leaving only Aqua Caliente as the only live poker room in the Coachella Valley area. Spotlight 29 tried to reignite interest with one-a-day weekend big buy-in tourneys this Spring and it was an immediate flop.

There have been numerous articles appearing that indicate live poker rooms and live table action are on the decline for ‘recreational players’. Could the decline be the minimums that casinos are putting on their tables and tourneys in order to seriously increase the house rake? There used to be $1/2, $2/4 table games. Now it’s no-limit, $200 buy-in, higher house rakes, while $35-50 tourneys have yielded space to the $125+ tourneys. These cease to be ‘recreational’ games. A recreational player sits down to enjoy a few hours of live table games. Now the rec player does a $200 buy-in and is leaving the table in 10-15 minutes. Hardly recreational, at least not for those of us on marginal disposable gaming funds.

It really doesn’t have much to do with being good, or getting better and winning more. I would guess that ‘most’ rec players understand they WILL lose in the long run, but they want to have a little fun and enjoyment along the way. If poker rooms will not agree to make less per sq/ft than the machine games, then live poker IS doomed in B&M casinos and only high stakes games will survive, with substantially fewer players.

4-8 game only on weekends, Omaha as well, room will choke off new players! my friends say pros in NL who raise UTG with 64 and call all ins with 2-3 make the game impossible for them!