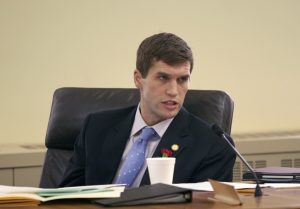 Tyson Larson is hoping to legalize poker in the state of Nebraska. (Image: NebraksaLegislature.gov)

Poker fans in Nebraska could get a chance to play their favorite game in their state, if a bill from State Senator Tyson Larson (R-O’Neill) is approved by the state legislature.

However, it’s not clear whether the legislation has the support it needs to pass into law, and even if it does, it’s possible that such a law could be deemed unconstitutional by the state judiciary.

According to the Nebraska attorney general’s office, it is unclear whether or not legalizing some forms of poker in the state would be considered unconstitutional.

That opinion, issued last Wednesday, was requested by State Senator Merv Riepe (R-Omaha), who has opposed the measure and even voted against it during the committee process.

Riepe said he would oppose the bill if it came to a vote regardless of what the attorney general said about it. However, he wanted to be sure it wasn’t “blatantly unconstitutional” before there was more debate on the issue.

The opinion was complex, citing a number of different factors that would have to be considered when determining if poker games could be allowed under the current Nebraska constitution.

Assistant Attorney General L. Jay Bartel wrote that Larson’s bill “would likely be found by a court to be an improper attempt to authorize games of chance,” for instance, because such games are prohibited by the Nebraska constitution.

But many poker players over the years have argued that poker should be legally classified as a game of skill, rather than one of luck. That determination could be critical in Nebraska because of that constitutional prohibition.

In the opinion, Bartel ran down a litany of instances in which courts have landed on the side of chance being the dominant factor in poker, including the Nebraska Supreme Court itself in 1975.

However, he also noted that there has been expert testimony saying that poker was a game of skill, and that “some courts have concluded that at least certain forms of poker are games of skill.”

Interestingly, Bartel said that there could even be the possibility that while draw poker games would be considered a game of luck, as the Nebraska Supreme Court said in that decision, Texas Hold’em could be found to be a game of skill.

“A community card game such as Texas Hold’em, however, differs in nature from draw poker, and there is empirical evidence indicating that, over multiple hands, skill plays a greater role than chance in outcome determination in this form of poker,” he wrote.

While the opinion isn’t exactly a ringing endorsement of his bill, Larson said he was still generally happy with it, as it didn’t completely dismiss the idea. That, he claims, says a lot, “coming from a very anti-gambling attorney general.”

Regardless of how other lawmakers react to the opinion, however, the chances of legalizing poker in Nebraska may be daunting, at least during the current session.

There are only a handful of days remaining in the legislative session, and lawmakers have yet to tackle a number of priority issues, including questions about medical marijuana, prison overcrowding, and workplace discrimination.

The potential legalization of poker in the state is also on that list, but it’s uncertain as to whether legislators will get to it given the number of other pressing issues on their plate.

“I’m concerned at this time,” said State Senator Galen Hadley (R-Kearney), Speaker of the Legislature. “My goal is still to get as many done as we can.”