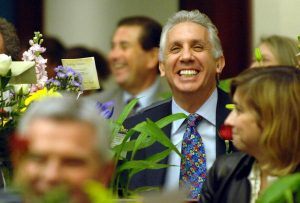 Senator James Waldman of the NCGLS says, “NCLGS wants to ensure that an effective system is in place for those that do allow intrastate Internet gaming.”(Image: Jim Rassol / Sun Sentinel )

The National Council of Legislators from Gaming States (NCLGS) has published the first draft of a new policy framework that seeks to establish a nationwide model for US states which wish to regulate online gaming. Based on consultation from numerous industry stakeholders, such as the American Gaming Association, National Council on Problem Gambling, and National Indian Gaming Association, the publication addresses the numerous regulatory issues that surround the licensing of remote gambling, from player protection to payment processing.

The New York-based group, which opposes the federal bill to ban online gaming, believes that a nationwide set of regulatory standards will aid public acceptance of online gaming across America, at a time when its very existence is being threatened.

The fledgling industry faces its greatest test yet, as the United States Congress and the House of Representatives are soon to scrutinize the Restoration of America’s Wire Act, presented in March, which seeks to stamp out online gaming in the US before it takes root.

NCLGS believes that a unified set of rules will reassure the public and politicians alike of the measures being taken to ensure that the highest regulatory standards are being demanded of operators. However, the association also believes that it is the individual states, and not the federal government, that is best positioned to decide whether remote gambling should be licensed within their borders, and that any interference in this is an infringement of states’ rights.

NCLGS president Rep James Waldman said: “As a group of legislators responsible for sound gaming public policy in our respective states, NCLGS recognizes the threats, as well as the possibilities, involved in new technology and Internet gaming. NCLGS wants to ensure that an effective system is in place for those that do allow intrastate internet gaming and that policy standards are in place to promote security and uniformity in states that may wish to form interstate internet compacts.”

Issues covered in the publication range from matters of player protection, which include issues of data protection and fair and appropriate dispute resolution, as well as how best to protect problem gamblers. In the latter respect, the framework calls for the adoption of information-sharing between operators and the use of self-exclusion lists and highlights the importance of effective staff training on the issue.

As well as a look at matters of taxation, the framework also emphasizes the need for a comprehensive anti-fraud and money-laundering policy, as well as the adoption of effective safeguards to prevent cheating, and highlights age-verification, geolocation and player identification issues.

“NCLGS believes that the standards contained in the framework should serve as a guideline, but should also evolve in response to emerging state needs, trends, and advances in technology in order to be of the greatest assistance to states,” explained the group in its statement. “The framework will provide a model for policymakers considering enacting Internet gaming legislation within their respective states, as well as, multi-jurisdictional Internet gaming initiatives.”

Meanwhile, The National Governors Association (NGA), whose members are the governors of 55 states, territories and commonwealths in the US, joined the chorus of voices attacking the anti-online gaming bill this week.

In a letter to Senate Majority Leader Harry Reid, Senate Minority Leader Mitch McConnell, Speaker of the House John Boehner and House Minority Leader Nancy Pelosi, the NGA stated that federal opposition was an affront to states’ rights of autonomy.

“Regardless of whether governors are in favor of offering gaming – through whatever form – within their own states, decisions at a federal level that affect state regulatory authority should not be made unilaterally without state input,” the letter read.

Elsewhere, however, former San Francisco Mayor, Willie Brown, once a proponent of online gambling, seems to have had a dramatic change of heart, joining up with Sheldon Adelson’s Coalition to Stop Internet Gambling for which he will become the California chairman.

“I was once on the wrong side of this issue – speaking for and supporting Internet poker – but I have since learned about some of the repulsive tactics used by online gambling companies,” Brown claimed. “The turning point for me came when I was shown information documenting how Internet gambling companies, including offshore companies, specifically target our children.”

Brown should probably take a quick look at the Policy Framework for the Regulation of Internet Gaming, in particular the section of underage gambling prevention, which is available to view at the NCGLS website and is currently open to comment. It’s scheduled for review at the NCLGS Summer Meeting which will run from June 6th to 8th in San Diego.

How does a site decide if a person is 18 or 10 or 12, or can they. I live in Oregon has any one heard of legalizing online poker here,thankyou