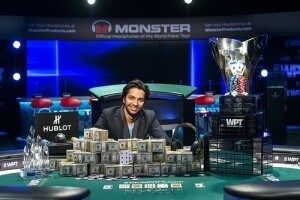 The World Poker Tour (WPT) schedule in 2014 came to a close with a bang, as Moshin Charania won the Five Diamond Classic in Las Vegas for more than $1.4 million.

Charania’s title is his second at the WPT and came as a result of a final table stack size that was just fifth best heading into play.

The Bellagio in Las Vegas has become a fixture of World Poker Tour mega-events over the last ten years and the 2014 Five Diamond Classic was no different.

This year, there were 586 entrants that hoped to engrave their name on the WPT Champions Cup and a claim to the $1,477,890 first-place prize.

The full event schedule had other tournaments which kicked off back on December 5 as well as a slew of satellite events into the Five Diamond Classic.

At the start of Day 4 of the event, there were 78 grinders remaining. The eventual champion, Moshin Charania, happened to be in absolute last place out of those 78 which makes his run to victory all the more remarkable.

When final table play started, here were the chip counts:

With no player in dire straits, it did take some time for the eliminations to come to get to heads-up play. On the 36th hand of final table play, Reinkemeier went all-in after Greer forced him to make a decision for all his chips.

Greer held pocket jacks, while Reinkemeier had A-T suited. The board never improved Reinkemeier, who was eliminated in sixth place for $218,842.

Seven hands later, someone else would be sent to the rail. Ryan Fee min-raised and was called by Greer. With a flop of J-T-2 with two diamonds, Fee bet and Greer called.

The turn was a 3 and Fee bet a million chips. After tanking, Greer decided to shove all his chips in the middle. Fee called for his remaining 3.88 million with pocket aces, but he was behind the flopped set of jacks of Greer.

The river popped another jacks for Greer giving him quads, and with his pocket aces, Fee was cast out of the tournament in fifth place for $272,842.

On Hand #114, Shaffer put the last of his chip stack into the pot with pocket nines. Greer called with K-Q suited. The board ended up giving the heart flush for Greer, sending Shaffer out of the tournament in third place for $562,736.

Greer was severely outgunned in chips in his heads-up battle with Charania.

While he did double up once, it simply wasn’t enough. On the final hand, which was the 184th of the final table, Greer went all-in preflop with ducks (pocket twos) and Charania, after weighing his options, called with 9-6 offsuit.

The board brought Q-T-8-4-J which gave Charania the improbably straight and the victory. For second place, Garrett Greer took home $869,683.

For the win, Moshin Charania took home $1,477,890 and his second WPT title. According to multiple online poker databases, this win brings his career winnings to in excess of $4.8 million.

A native of the United States, Charania has 223 career cashes, 2 WPT championships, and a final table appearance at the World Series of Poker.