A questionable slow roll caused Mike Matusow, who was live-streaming, into a profanity-laced rant during an online WSOP event. Allen “Acnyc718” Chang, left the table in a better mood than “The Mouth” after winning the $1,000 No-Limit Hold’em Freezeout event, the bracelet, and $161,286.

Chang defeated a large field of 854 runners to claim the title. The fifth event of the online bracelet series was the first freezeout, and one of just three scheduled during the 31-event WSOP.com series.

The champion defeated Philip “tomte” Yeh heads-up to win the bracelet. Despite failing to capture gold, Yeh still earned a cool $99,709 for his impressive performance. Felipe “McBain” Leme went out in third place, taking home $69,772. The summer WSOP replacement series resumes on Monday with the $600 Omaha Hi-Lo 8-or-Better 6-Max, the first non-hold’em event of the summer.

Matusow entered the $1,000 online WSOP event and was quickly felted when he ran A-Q into pocket aces on his second hand. That made for a short stream, but his viewers certainly got their money’s worth, although some may have been offended by the content.

The former Full Tilt Poker pro, appropriately using the “mouth123” screen name, woke up with A-Q in the big blind. Megan “wolverine17” Milburn, however, had him in a world of hurt with the rockets.

Although the board was dry and only a few hands in Milburn’s range beat pocket aces, she took quite some time to call. She eventually did and won the pot when the board ran out 2-J. The apparent slow roll wasn’t to Matusow’s liking.

Matusow has long made it known he despises players who slow roll. Shaun Deeb, a habitual slow roller, got him good in an old Poker Night in America cash game episode. Deeb flopped quad fives against Mike’s pocket jacks and took his merry little time on the turn before making the call.

“I’ve never slow rolled anybody before,” Matusow told Deeb. “You can do anything to me, you can call me any name under the sun, but if you slow roll me, I will punch you in the f*****g mouth.”

On Sunday, the four-time bracelet winner went on a similar rant after supposedly being slow rolled. Unknowing at the time his opponent was a female, he made a sexually suggestive threat that we won’t repeat here, but you can watch it in this video if you’d like.

Matusow continued his rant while on his YouTube live-stream. The unabashed Donald Trump supporter, as he often does, turned a non-political issue into a political issue.

He then sought the name of the “guy” who slow rolled him, only to soon find out his opponent was a woman. Matusow again made an assumption about her political leanings.

“Probably one of those f*****g crazy Leftist people yelling ‘black lives matter,’ and you’re all racist in the street,” he assumed.

Refusing to move on, Matusow then fired off an insulting tweet which he would later delete. But have no fear, we kept the receipts. 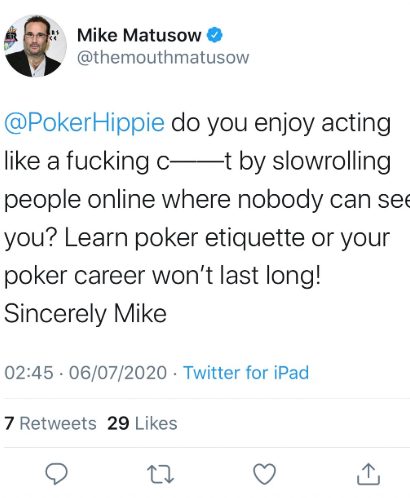 Milburn responded to the deleted tweet. The slow roll wasn’t intentional, she said, “but the next one might be tho.”

The mouth, I feel, is goofier n. Hell to support Donnie trump, but I generally agree with him that slow rolling in poker is very bad sportsmanship, although this woman, milburn, it appears, might not have intended to do that. “I” might get very angry, too, though if someone intentionally slow rolled me. Mike, I feel, has a good heart, and sometimes gets emotional, but is often right about his feelings. A good poker player, too, of course! But on Trump, like I say, goofiier n hell!! Take care, mike!

There’s nothing to agree with here. He’s a POS that deserved to be put down long ago, and if you support him in any way, you’re a POS as well.

How is her rethinking he might have 9’s or 10’s for the flopped set and working it out a slow roll? I expect she will go farther than any of us in the next Main Event!

The thing about slowrolling is that ur dangeling hope in front of a person, teasing them and tempting them, like saying ” u might have won( in which case youll be greatly relieved) or maybe u lost, but only i know. Would u like to know if ur dreams are dashed!? Ok ill tell u …. In a few seconds i will…. I promise very soon youll know, any second now….. It,s cruel is what it is.