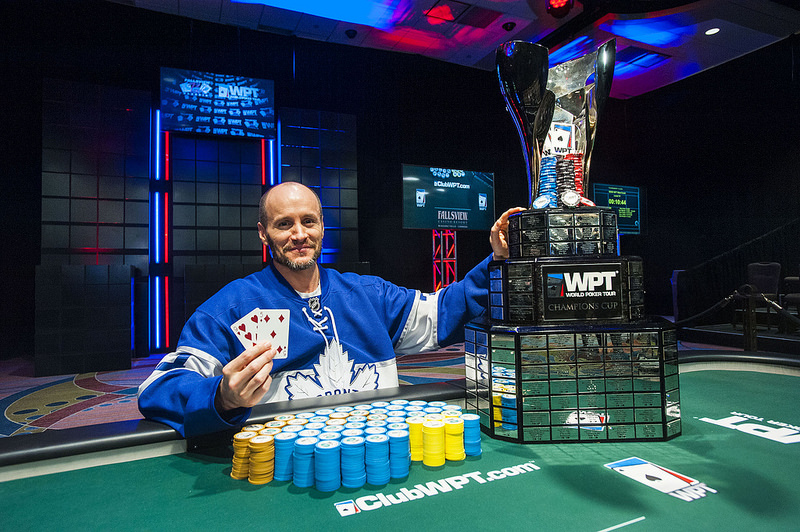 Mike Leah scooped the WPT Fallsview championship, but did he “buy” the title? (Image: WPT)

Mike Leah played a quick heads-up match against Ryan Yu for the WPT Fallsview title in Niagara Falls on Tuesday, but to the dismay of many poker pros, it was more a formality than an actual competition. The two players had already agreed that Leah would be crowned champion in exchange for an Independent Chip Model (ICM) chop, which divides up the prize pool based on current chip stack size.

On the first hand, following an unscheduled break (more on this in a bit), Yu raised on the button to 4 million with blinds at 60,000-120,000. You know, a standard 33x raise. Leah then came over the top all-in for just under 4.7 million and his opponent folded.

On the following hand, Leah limped on the button, Yu raised to 5 million and got three-bet all-in, to which he folded. The shenanigans continued for two more hands before the match concluded.

It doesn’t take a member of Mensa to figure out that the two players agreed to some sort of chop during that unscheduled break. As WPT.com was updating the tournament results in real-time, Poker Twitter got up in arms over what many believed was an illegitimate win.

It’s not uncommon for players to chop heads-up in a tournament, but for fans following the action online, the sanctity of the WPT was being attacked with Leah receiving Player of the Year points and a coveted WPT title, the first of his career, that he didn’t.

“I’ve never been able to wrap my head around wanting to win a trophy that you didn’t earn…like what type of person even wants that? If you are all about accomplishment over the $$ then wouldn’t you actually wanna accomplish something beyond being a fraud?” Jared Jaffe asked on Twitter.

“To do this for dollars seems fine. To do it for titles and awards seems wrong,” Dan O’Brien tweeted. “That’s as much as I’ve formulated my thoughts on it thus far, but I’m confident in them. Anyone have a good reason I might be wrong?”

The WPT frowns upon final table deals, another point of concern from the overly dramatic Poker Twitter crowd, but it’s difficult to prevent the players from agreeing to a chop behind closed doors.

“If you run a tournament series you have to incentivize the players to work with you. Don’t tell them ‘no deals allowed’ and get made when they deal under the table. Maybe tell them you’ll fully facilitate a deal if they leave 10% of the prize pool to play for on TV,” Justin Bonomo suggested.

It’s unclear how much each player received from the remaining C$753,038 prize pool. But, based on standard ICM chop calculations, Leah would have received C$346,985 and Yu would have taken home C$406,052, although there may have been some extra cash shipped to the runner-up in exchange for being crowned champion.

Daily drama on Poker Twitter will never end. After taking some heat online, the heads-up opponents fought back, explaining their decisions. Yu admitted money was all he cared about.

“Basically i didn’t want the 15k seat and the trophy is nice but for whatever reason I don’t really care for it. We valued different aspects winning differently (and Mike should value it more he is much more accomplished) and I thought I was being generous but who cares?” Yu wrote.

“If you want to pretend my results over the years are tarnished because I made a deal HU ok; you’re free to your opinion…You have to get there before you can even consider making a deal and I get there more than you,” Leah wrote as part of a lengthy explanation on Facebook.

Playing in the Tournament of Champions and joining the exclusive WPT Champions Club was more appealing to Leah than Yu.

But many poker players, not just the big name pros, including one random Twitter troll who referred to the win as “tainted,” and told Leah to “GFY” (you can find the meaning of the acronym on Urban Dictionary if you’re confused), felt the players disrespected the WPT by predetermining the champion.

kinda split on this, one one hand if they deal behind closed doors who cares. but ya its alil cheezy to win like that and rep it like u earned it

If we anyway agree that you dont care about the title and the money are basically spit (12K in this ammount is not really an issue) why would we put on a show? Would it be easier for any1 if we really played while nor you nor I care? And exactly who shoudl we ask? Randow some1 on twitter are they OK with us splitiing in 38hands, what about 63 is that to much? IF you what to be “pure” about poker as a cometition than you sould aproach EVERY mtt like this – no deals at all. And again who are they supposed to ask, who should be the athority?