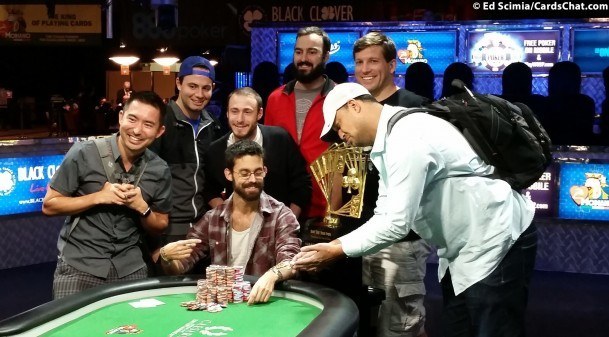 Mike Gorodinsky had come close to winning a bracelet twice this year at the World Series of Poker, first losing to Phil Hellmuth heads up in the $10,000 Razz Championship, then taking third last week in the $5,000 No Limit Hold’em Six-Handed event.

But on Thursday night, Gorodinsky broke through in the one event that means more to top players than any other at the WSOP: the Poker Players Championship.

Gorodinsky emerged victorious in the $50,000 buy-in Poker Players Championship, becoming the latest to add his name to the Chip Reese Trophy. The victory earned him $1,270,086, as well as his second WSOP bracelet.

But the victory didn’t come easily. Gorodinsky battled Jean-Robert Bellande for nearly four hours, going through the tournament’s ten game mix several times along the way. Bellande started with the chip lead, but both players had significant advantages at different times.

Finally, after 12:30 am Pacific Time and just a few minutes after coming back from a break, Gorodinsky was able to finish the job in a hand of Pot Limit Omaha. Bellande and Gorodinsky got all-in on the flop, with Gorodinsky holding a set against Bellande’s two pair. JRB was drawing live, but two straight kings did nothing to improve his hand, putting an end to a fantastic run for Bellande.

“I feel amazing,” Gorodinsky told reporters after the tournament ended. “This is literally something that I’ve gone to bed dreaming about, and it’s just cool to legitimately realize a dream.”

While there was some controversy over the addition of two new games (Badugi and No Limit Deuce-to-Seven) to the Championship format, Gorodinsky said that he welcomed the change.

“I personally like it,” he said of the format. “I play all the games, and those are two games that I’ve played a ton. Badugi is actually one of my favorite games. I think there should be a standalone Badugi event. I think it’s a really complex, good game.”

Gorodinsky’s first major poker title also came in a mixed game format: a $5,000 Eight-Game tournament at the 2010 PokerStars Caribbean Adventure, in which he coincidentally also defeated Bellande in heads-up play. For Gorodinsky, the mixed-game tournament success has come as no surprise.

“It is my thing,” he said. “I play mixed cash for a living, so this means a lot. It’s kind of like a little ego boost.”

Elezra wasn’t the only person at the final table looking to expand his collection of WSOP bracelets, though. Five-time winner Allen Cunningham was also in the hunt, but would ultimately finish in third place. It was a somewhat disappointing ending, but still his best finish since a runner-up performance in 2013.

For Elezra, this bracelet meant a little more because of the history behind the Seven Card Stud event.

“This one was really special to me,” Elezra said after the tournament. “It’s the game many of us grew up on and it’s played by the most experienced players.”

In the $3,000 Pot-Limit Omaha tournament, Vasili Firsau took the top prize of $437,575 to become only the second player from Belarus to win a WSOP bracelet, and the first to reside in the country at the time of his win. Belarus was well-represented at the final table, as fellow countryman Vadzim Markushevski finished in fifth place.

“This is great for me and a great feeling to win this,” Firsau said through an interpreter. “I had many bad years here and this time to come and win, it feels amazing.”

Upeshka De Silva only had to play for about 20 minutes on Thursday to finish his heads-up match against Dara O’Kearney and claim his first ever WSOP bracelet. De Silva won the $1,500 No Limit Hold’em tournament, earning himself a $424,577 payday.

The win came after a dominating final table performance that saw De Silva knock out seven of the other eight players.

“This is surreal, that’s the best way to describe how I feel right now,” De Silva said. “I waited my whole life for this…it was like a dream coming true.”

Justin Bonomo will be looking for his second bracelet in as many years on Friday, as he holds a significant chip lead heading into the final day of the $10,000 Limit Hold’em Championship. Bonomo has 910,000 chips, about 300,000 ahead of his closest rival, Aleksandr Densiov. Nobody else has as many as 400,000.

There are 11 players left, and we should reach the unofficial final table of ten quickly on Friday, as short stack Ian Johns has less than a single big blind remaining. Some of the biggest names still alive that haven’t been mentioned yet include Jesse Martin, Anthony Zinno, Terrance Chan, Ben Yu, and Gabriel Nassif.

The $1,500 Dealer’s Choice event kicked off on Thursday, and in an event that will truly test the width and depth of a player’s poker skills, it is no surprise to see a lot of big names near the chip lead after Day 1. Justin Gardenhire will lead the pack of 96 heading into Friday’s Day 2, while Brian Hastings, Jeff Lisandro, Robert Mizrachi, and Scott Clements all bagged plenty of chips as well.

Taking a quick look around the tournament, it was clear that while pretty much every available game was getting some time at the tables, a few options stood out as being particularly popular. Those included Big O (you may know the game better as Five-Card Omaha) and the Badugi variants Badeucey and Badacy, all of which are games that some players likely believe they have far more experience in than the average opponent.

Galen Hall will take the chip lead into Day 3 of the $1,500 Pot Limit Omaha Hi/Lo tournament, and will have a pack of strong opponents among the field of 21 players trying to chase him down when play resumes. Connor Drinan and George Danzer sit in second and third position respectively, while Erik Seidel has a comfortable stack himself in seventh place.

After the first day of the $3,000 No Limit Hold’em Six-Handed event, 285 players remain in contention, with Ismael Bojang holding the chip lead. Not surprisingly, plenty of other recognizable faces are still alive and have big stacks of their own, including Leo Wolpert, Jared Jaffee, and Joseph Cheong. 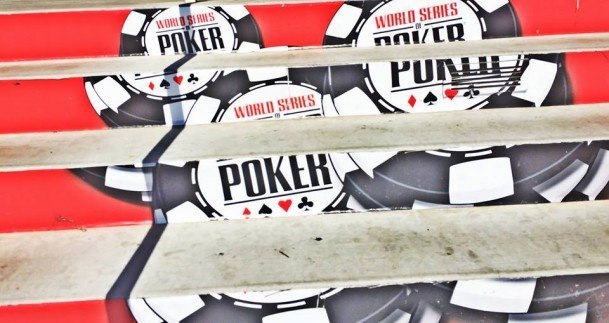 The controversial Ladies NLH Event will kick off today at the World Series of Poker 2015. (Image: CardsChat.com exclusive)

The $10,000 Limit Hold’em Championship will play down to a winner on Friday: that much we know for sure. It is almost certain that it will be joined by the $1,500 Pot Limit Omaha Hi/Lo event, though we’ll go just short of guaranteeing it will wrap up before end of the day.

Meanwhile, two new events are on the schedule Friday, and they are both $10,000 buy-in tournaments, sort of.

At noon, every player in the Rio is eligible to enter the Ladies No Limit Hold’em Championship, though that comes with a small caveat. While the official buy-in for the tournament is $10,000, women receive a “discount,” and only pay $1,000 to play.

This has proved to be the most elegant solution to the common issue of men entering events designated solely for women when they cannot legally be barred from playing, and has done a good job of making this tournament for women only, as it was intended.

There’s no special explanation required for the second event of the day, however. The $10,000 Pot Limit Omaha Championship is meant to be a high buy-in event for anyone who wishes to play. Expect yet another tough championship-caliber field in this one, but also keep an eye on the number of entries, because with how well Omaha tournaments have been drawing this year, it’s possible that this event might attract more players than you expect.