Gold doesn’t always glitter when poker players are competing for cash. That’s the lesson the Midway Poker Tour learned last weekend after paying players in precious metals while trying to carve out a niche on the US tournament circuit. The late-in-the-game legal workaround baffled some, irked others, and caused companies to disassociate themselves from the event. 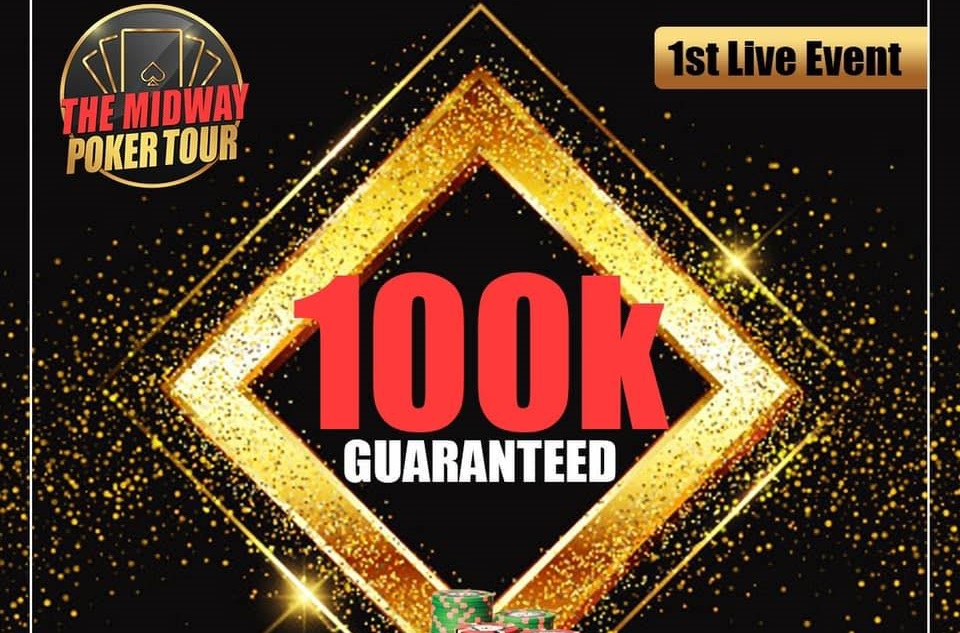 Organizations linked to the Midway Poker Tour are racing to distance themselves from its recent event following some bizarre payout issues. (Image: Facebook/Midway Poker Tour)

All started off well at the Sheraton Hotel in Elk Grove Village, Illinois, last Saturday. However, it soon emerged that players in the $1,100 main event would be paid in gold and silver instead of cash to comply with Illinois gaming laws.

The bizarre turn of events not only caused problems onsite, but forced the company behind the somewhat controversial PokerBROS app to deny any involvement in the tournament.

A total of 266 players anted up for what was billed as a $100,000 guaranteed event. The organizers, Dan Bekavac and the Midway Poker Tour, partnered with a charity called 4 KIDS Sake, Inc. in an effort to comply with local gambling laws.

What I’ll be taking home to Columbus tomorrow. Anyone know a silver guy? pic.twitter.com/v8jOCbDiJR

Things were running smoothly before signs of a problem surfaced. Terence Shiel, a representative for the state Attorney General’s office, visited the event at which point, it became clear that payouts wouldn’t be handled in the usual manner.

Under the Illinois Charitable Gaming Acts, charity poker tournaments are only allowed to pay out cash prizes up to $500, plus the value of a player’s buy-in. This meant the most money a player could receive was $1,600.

With the minimum payout set at $2,300, the organizers arranged to make up the difference by awarding prizes in the form of precious metals. The workaround involved giving players gold and silver bars, which they could then sell to an onsite precious metal dealer.

Although convoluted, the system didn’t breach local gaming laws, however, Shiel informed organizers that exchanges couldn’t be done at the venue. Moreover, they needed enough gold and silver to cover the full amount of prize money (over $200,000).

A call to a local dealer, Andy Mettille, was made and enough precious metal was secured. Payments were then due to take place somewhere away from the venue.

When the 31 players who cashed in Midway Poker Tour main event were told about the arrangement, grumblings of discontent were noted, according to those on scene. Eventually, however, everyone agreed to play on.

Trouble occurred again when players went to sell their gold and silver. For reasons that remain unclear, a buyer wasn’t available to purchase the precious metals on Day 2. Moreover, Midway Poker Tour bought the gold and silver at retail prices.

This meant no one could sell their precious metals at the end of their day’s play and, more significantly, the value of their gold and silver was based on a higher price than what a broker would pay. That made the precious metals worth less than the advertised payouts.

The tournament played to a conclusion and Renato Saphiu emerged as the winner. However, the bizarre turn of events has caused those involved to clarify their positions.

4 KIDS Sake appears to have been caught unaware of the controversy, while precious metal dealer Andy Mettille has also distanced himself and his company, AMPM.999 from the situation. In a statement to PokerNews, he said the only involvement his company had was in fulfilling a purchase request for $200,000 in silver.

Finally, PokerBROS has disassociated itself with the tournament. Midway Poker Tour founder Dan Bekavac runs a skin on the PokerBROS network. It was a condition of entry that players had to download the free-play mobile app and register with Midway Club to play the tournament.

PokerBROS sent out a press release on Monday stating that had nothing to do with the registration requirements or the tournament.

“PokerBROS would like it to be made clear that they did not have prior knowledge of this event, did not endorse it, and the use of its trademarked name/logo without prior authorization is strictly against PokerBROS Terms of Service. As a result of this breach by the Midway Club, their Club has been banned from the PokerBROS platform,” reads the press statement.

Bekavac has apologized and pledged to make up any money owed to players. He also issued a statement on Facebook. 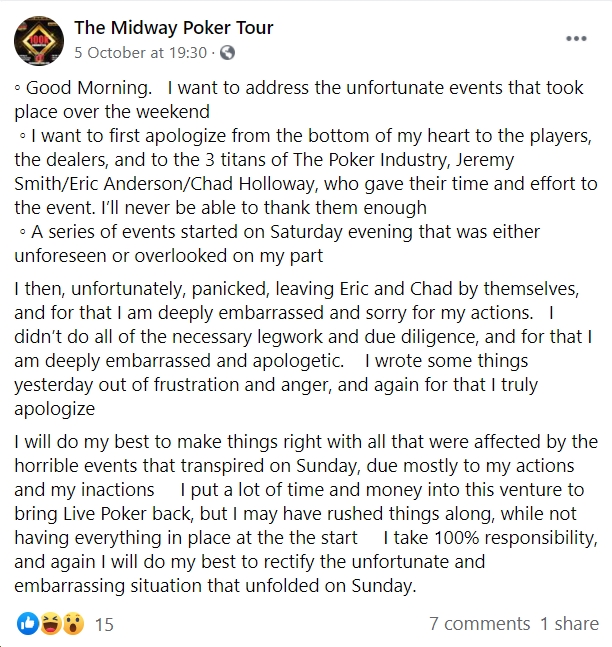 The whole situation is as bemusing as it is confusing. What’s clear, however, is that this will probably be the Midway Poker Tour’s first and last event. With everyone involved scrambling to distance themselves from the saga, an unfortunate cloud has been cast over what could have been a successful tournament.