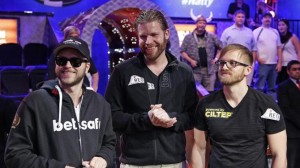 He started the November Nine in eighth, but Martin Jacobson (right) finished holding up the gold bracelet. (Image: hd.se)

Martin Jacobson won his first World Series of Poker bracelet with three tens, a fitting hand for the Main Event’s $10 million grand prize. While the casual poker fan might not have been real familiar with the 27-year-old from Sweden, he’s been doing a lot of winning in recent years.

In fact, while he entered the November Nine with the eighth biggest chip count, he was arguably the most experienced player in the group.

The consummate pro throughout Monday and Tuesday’s action, both novice and experienced players would be smart to mimic his style of play. Though he’ll always be known as the 2014 WSOP champion, there’s much more to Martin Jacobson.

Who Is Martin Jacobson?

Hometown: Originally from Stockholm, Sweden, Martin took up poker at the age of 18, playing games with friends and participating in freerolls online. His skills led him to small-stakes cash games and single game tournaments before taking his skills on the road, or should we say around the world. From the World Series of Poker to the European Poker Tour, Jacobson’s accomplishments have made him an international star.

Occupation: Although he initially wanted to be a chef, Martin luckily had a job opportunity in the food service business fall through, giving him more time to devote to poker. He never looked back, and has been a professional poker player for several years.

Daily Life: Now living in the culinary-rich center of London, Martin resides with his girlfriend. He is extremely health-conscious and regularly exercises, something he says is a great asset to playing professional poker.

Before the 45th Annual World Series of Poker No-Limit Hold’em Main Event, Jacobson had already cashed at 15 WSOP events, including five top 10 finishes. His largest payday came at last year’s Big One for One Drop High Rollers tournament. It cost a boatload just to sit down, with the buy-in at $111,111, but Jacobson’s 6th place finish awarded him $807,427.

Over the course of his now-storied career, he’s cashed 55 times, made 27 final tables, and gathered more than $5.5 million in tournament winnings. Not too bad for someone who won’t even turn 28 until the end of June.

World Series of Poker Going Back to the Pros

From the early onset, it was clear the November Nine this year all had the chops to win the gold bracelet. And this new crop of pros didn’t include any miracle Moneymaker-esque candidates.

Entering the final table with the second-lowest chip count, Martin had to be cautiously aggressive with his play. The slow pace of Monday’s action was marked by few high-risk moves, until Billy Pappas met his match. Jacobson went all-in with pocket fives, and Pappas called the 24.4 million chip bet with AJ.

Following a five on the flop, Billy was eliminated. With only four players left, Jacobson advanced to Tuesday by knocking out William Tonking who went all-in with pocket twos. Jacobson called with pocket tens, which turned out to be the winner, and also a bit of foreshadowing.

With van Hoof seemingly not the same player we saw a day earlier, Jacobson defeated Felix Stephensen in heads-up play on the 328th hand of the final table.