Masters of the Game: Senior Poker Players Who Made Us Give ‘Em Props in 2017

They say poker is a young person’s game, but a few savvy senior poker players this year showed us in 2017 that old dogs already have quite a few tricks up their sleeves, and can teach the pups a thing or two themselves. 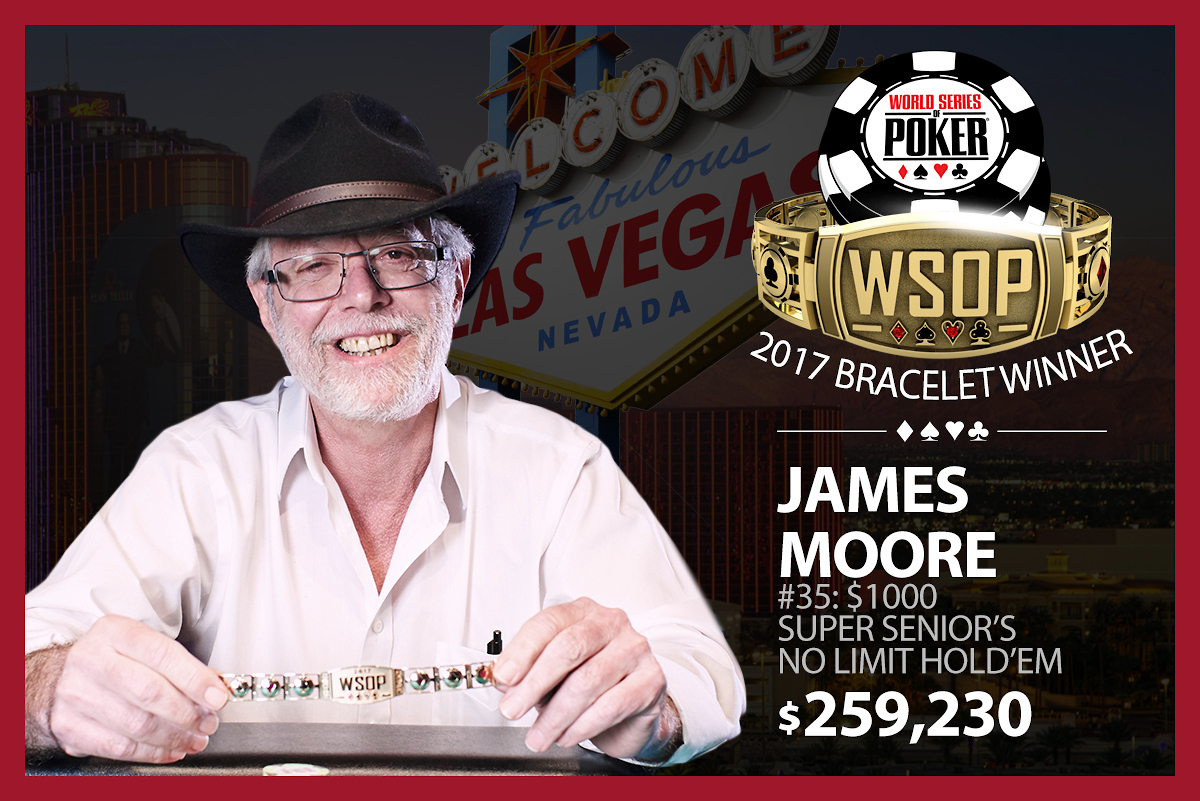 Players like Frank Maggio and James Moore showed us that writing off the elder statesmen of the game can be a dangerous, and costly, proposition.

When you think of senior poker players, you no doubt think of the World Series of Poker Seniors Event. This year’s incarnation drew a record 5,389 players, which was a 20 percent increase from 2016. The field was so large, in fact, that an extra day was needed to finish it out, and 56-year-old Frank Maggio of Illinois took down the bracelet and the $617,303 first-place prize.

Just a couple of days later, the Super Seniors Event, which requires players to be ages 65+, saw 66-year-old Kentucky physician James Moore top a field of 1,720 players to win $259,230.

What made it one of the most impressive stories of the year, however, was that Moore successfully defended his title for his second WSOP gold bracelet. He’d won the same tournament in 2016 in a field of 1,476 senior poker players, which was good for $230,626.

Meanwhile, in Event #21: $1,500 8-Game Mix 6-Handed, collectibles dealer Ron “Grumpy” Ware claimed his first bracelet and $145,577 in prize money. We couldn’t find his actual age anywhere (we looked hard, too) but he entered a Deep Stack Seniors event at the Venetian back in 2015, so we at least know he qualifies for our purposes.

Finally, in Event #40: $1,500 7-Card Stud Hi/Lo, 68-year-old Ernie Bohn, the uncle to Hall of Fame bowler Parker Bohn III, notched his first-ever WSOP cash, which was a win for $173,228. Bohn, a retired Navy serviceman who has been married to his wife Pam for 46 years, also earned a gold bracelet.

We’d also be remiss if we didn’t mention John Hesp, who made a deep run in the WSOP Main Event. The jovial and colorful Hesp won the hearts of poker fans around the world on his way to finishing in fourth place for $2.6 million. Now it sounds like a movie might be made about his incredible poker journey.

The Out of Towners

There were also a number of players who did well outside of Las Vegas. In April, 61-year-old Fred Garcia, who spent 25 years working for the Colorado Department of Transportation, prevailed over a 472-entry field to win the MSPT Golden Gates Main Event for $109,881. Garcia, who had lost his fiancée less than a year earlier, was due for something nice to happen.

In September, Bill Donnelly topped a field of 241 players to win the WPTDeepStacks Oklahoma Main Event for $52,509.

It was also a good year for Mike Holm of Illinois, who started off by winning January’s $300 monthly Seniors Event at the Wynn Las Vegas, good for $6,755. In September, he returned there and scooped another Seniors Event, this time the $570 50+ tournament for $13,146.

It’s great to see seniors doing so well, especially when you consider the stamina it takes to focus for a 3 day tournament of roughly 11 hours per day. I was excited because I turn 65 in April 2018, and decided I was going to play in the Super Seniors tournament, where I would be one of the “youngsters”. Then I heard that they changed the age down to 60. Now I have to face a much younger crowd.

I like to see when seniors win! I respect most of these seniors players! They know what a his good EGO nindset means! I don`t like young players, because they want a lot and nowadays they learn little by counting on luck! They often want a respect that they don`t deserve! Respect only to good players with good EGO. IMO there aren`t many young players with good players!