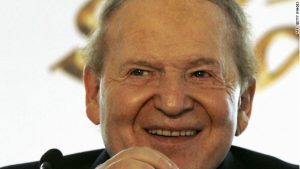 Adelson’s takeover of LVRJ reportedly has reporters worried for their jobs. (Image:Getty)

Mike Hengel, the editor of the Las Vegas Review-Journal has resigned in response to the purchase of the newspaper by the Adelson family.

Hengel’s announcement reportedly stunned the newsroom, as staff admitted this week that they feared for their jobs after exposing the casino mogul as the mystery new owner.

Hengel said that he felt his relationship with the Adelson family would “adversarial” and that it would be better to let them choose their own editor.

Reporters were informed two weeks ago that the paper had been acquired by a company called News + Media Capital Group and that they were “not to worry” about the identity of the new owner.

But with Hengel’s support, LVJR blew the lid off the story themselves, identifying Adelson using “good old-fashioned beat reporting: working sources, massaging sources, coaxing sources,” in the words of one of the contributing journalists, Jennifer Robison.

Since then, several stories have appeared in the newspaper that could be said to portray Adelson in a negative light, including an opinion piece from John L Smith, whom Adelson attempted to sue into bankruptcy almost a decade ago, which called him “the wrong person to own this or any newspaper.”

Gaming correspondent Howard Stutz, meanwhile, who was also one of the journalists to expose the Adelson takeover, wrote a piece highlighting the drubbing that anti-online poker legislation RAWA took at a congressional hearing several weeks previously, an article that would have not have pleased his new boss.

The newspaper also revealed a mysterious assignment that had been handed down to them from top brass just weeks before the takeover took place.

Reporters were told to monitor three judges, one of whom, Elizabeth Gonzalez, is presiding over the ongoing wrongful termination brought against Adelson’s LVS by its former Macau chief-exec, Steve Jacobs.

What Does Adelson Want?

The question on everyone’s lips, though, is what does Sheldon Adelson actually want with LVRJ?

Despite assurances that the newspaper’s editorial freedom would be retained, it’s clear that staff are uneasy.

Nevada’s status as an early voting swing state would make certainly make it useful to a Republican mega-donor who wished to influence voters.

And what about Adelson’s crusade against online poker and internet gambling?

He has previously said he will spend “whatever it takes” to banish regulated online poker from the US.

The Adelson family has said that the newspaper will not become its mouthpiece and LVRJ reporters are determined to keep it that way: “You can be assured that if the Adelsons attempt to skew coverage, by ordering some stories covered and others killed or watered down, the Review-Journal’s editors and reporters will fight it,” read an editorial, published on the front page over the weekend.

“How can you be sure? One way is to look at how we covered the secrecy surrounding the newspaper’s sale. We dug in. We refused to stand down. We will fight for your trust. Every. Single. Day. Even if our former owners and current operators don’t want us to.”

It’s not often a good sign when the new owner of a newspaper tries to hide the purchase .The editorial staff is right to worry about maintaining neutrality .