Lock Poker Traffic Up, Even After Warnings of Insolvency 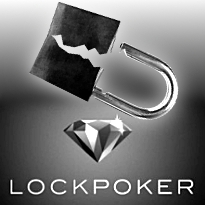 Lock Poker, the best advertisement for poker regulation in America right now, is gaining traffic, but not a good reputation among players. (Image: toppokersites.com)

Lock Poker’s cash game traffic rose 14 percent over the past month, according to industry observer PokerScout.com, despite warnings that the increasingly mistrusted site should be avoided. While the regulated American markets seem to be slowly recovering from a summer slump, the offshore market appears to be enjoying a mini-resurgence too, which could be concerning in the case of Lock.

The site continues to tell new players that it processes cash-outs within eight to ten weeks, but currently the oldest pending withdrawals date back to November 25, 2012, and almost $1 million is still owed to players.

While a 14 percent increase on the seven-day average of ring game players at Lock is actually reasonably small, representing an average of five extra players at the cash game tables throughout the week, it suggests, nevertheless, that repeated warnings about the site are not being heeded.

The Poker Players Alliance (PPA), a grassroots organization committed to safeguarding the interests of poker players across the US, issued the following warning just last month: “Due to continued non-payment of player funds by Lock Poker, along with their refusal to respond to inquires by PPA, PPA has shared with the Department of Justice player concerns regarding this site,” said the statement.

“We did this in person during regular meetings on ongoing Full Tilt Poker remission. In the meantime, we warn extreme caution when depositing on Lock Poker. We also strongly warn affiliates to remove Lock Poker ads and positive reviews,” said the PPA statement.

In April, PPA issued an open letter to Lock demanding clarification on whether Lock keeps players’ funds segregated from operating funds, and whether the company has a timeline of its plan to pay its players. It also demanded that the company immediately provide open, accurate, up-to-date information regarding time required to process customer withdrawal requests. The PPA was ignored.

Lock Poker made the decision to continue taking American bets after Black Friday and so benefitted from an increase in traffic, as US players opted to carry on playing online after the demise of PokerStars and FullTilt in the US. However, if there was ever an example of why, as a US resident, you shouldn’t play on an offshore site unregulated in the US, it is Lock.

The site, incidentally, is licensed in the somewhat relaxed gambling jurisdiction that is Curaçao, a small island off Venezuela, which doesn’t appear to be too concerned about the business practices of its licensee.

Lock’s healthy new post-Black Friday player base began complaining of slow payouts and a lack of communication between the site and its customers. That situation has deteriorated over the last two years, and many are questioning the company’s solvency, while some players are selling their accounts at substantially less than face value.

Last October, Lock left the Revolution Gaming Network citing as a reason “numerous and ongoing breaches of contract by the network operator;” however, Revolution claimed that it has been forced to segregate Lock’s players from the others on the network due to “lack of payment to the network and a large growing debt.”

Amazing, given all the info about Lock not paying out.