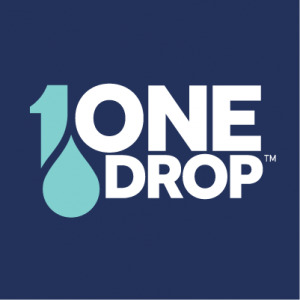 The One Drop Foundation helps people in Third World countries gain access to clean and safe water. LOFOD benefits the cause each year. (Image: Twitter)

The Little One for One Drop (LOFOD) may not have the massive buy-in that its larger cousins (this year’s High Roller for One Drop and the biennial $1 million Big One for One Drop) have, but it certainly makes up for it in volume.

The World Series of Poker saw the LOFOD begin on Tuesday, drawing huge crowds who were there not only to play some poker, but also to raise funds for a very worthy cause.

A total of 4,555 entries were received for The Little One for One Drop over the course of two starting flights on Tuesday, with just over 1,000 of those players making it through to a combined Day 2.

It’s hard to be certain how much money went to One Drop through this event before official figures are released, but if nearly everyone paid their $111 optional add-on for the charity (and it’s almost certain that they did, as players received an additional 5,000 chips for the small donation), then the total is likely over $500,000. 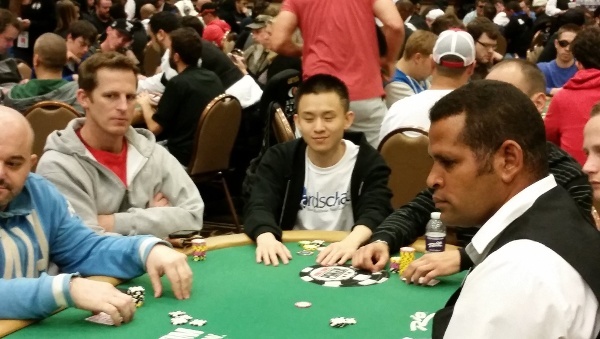 $10K Limit winner Ben Yu was among those playing for Team CardsChat in the Little One for One Drop on Tuesday, but unfortunately did not make it through to Day 2. (Image: CardsChat.com)

Chip leader heading into Day 2 will be Nick Yunis, who bagged 173,200 chips in the 1A starting flight.

Plenty of notables made it through from each flight as well: Allen Cunningham, Stephen Chidwick, Allen Kessler, Michael Mizrachi, and Barry Greenstein are just a few who will try their luck again on Wednesday.

Team CardsChat has a representative moving on to Day 2 as well. While many of our players ran into some bad luck during Day 1, Carl DiVeglia III bagged 32,600 chips and will be back in action on Wednesday. Best of luck, Carl!

Only 12 players remain in contention for the $25,000 High Roller Pot Limit Omaha title, and they’re being led by one of the hottest players in poker over the past year. Anthony Zinno, last season’s World Poker Tour Player of the Year, has 2.46 million chips heading into Wednesday’s Day 3.

While not everyone left in this high-stakes contest is a household name, there are still a few notables for fans to keep their eyes on. Shaun Deeb is currently sitting in fifth place, while Ismael Bojang survived with a short stack in tenth position. Juha Helppi (2nd) and Christian Harder (8th) are also looking for their first bracelets after racking up numerous cashes at the WSOP over the years.

$1,000 No Limit Event Comes Just Short of a Winner

Takahiro Nakai is so close to his first bracelet that he can probably taste it. But he’ll still have to come back on Wednesday to finish the job, as heads-up play couldn’t quite be completed in the $1,000 No Limit Hold’em event last night.

Nakai has over 11.1 million in chips, while opponent Melvin Wiener has a little more than 1.3 million. No matter who comes out on top, this will be a momentous occasion for the winner: between the two players, they have only one WSOP cash, and it came just this week when Nakai earned a minimum cash in the DraftKings 50/50 event.

Jaime Gold hasn’t exactly torn up the WSOP since winning the Main Event in 2006, but he is certainly making a deep run this week. Gold is currently in second place in the $1,500 No Limit Hold’em event, having bagged just over 1 million chips heading into Day 3.

Gold trails only Guiliano Bendinelli, who comes into Wednesday’s play with over 1.5 million. Other notables still in the field include Ari Engel and Joe Kuether, both of whom have top ten stacks.

Obviously, the $1,000 No Limit Hold’em event will declare a winner on Wednesday. But beyond that, things are a little bit up in the air. The PLO High Roller appears as though it could easily finish up today as well, but it was originally scheduled to last into Thursday, meaning that there’s no rush for players or organizers, and the structure might allow the final table to stretch throughout the night and even into tomorrow.

Another event, the $1,500 No Limit Hold’em tournament that began Monday, was scheduled to wrap up today. However, with 37 players remaining, it’s not entirely certain that it will close out by the end of the day’s play, though it is worth keeping an eye on.

As for new events, two more are on the schedule for Wednesday. At noon Pacific Time, a $1,500 Bounty No Limit Hold’em tournament will begin. The bounty format is new for the WSOP, with players receiving $500 for each player they eliminate. It will be interesting to see how much of an impact this makes on how fast the tournament moves and how much players chase knockouts.

At 4 pm  PT, the $10,000 H.O.R.S.E. Championship begins. This event is yet another that will test the variety of poker skills a player has, and you can expect to see most of the best mixed-game players in the world in the field.