Late Buy-In? There are Still Summer Poker Tournaments in Vegas in July

The WSOP isn’t the only game in town. Several casinos up and down the Strip and along Fremont Street offer competing tournaments to try to entice business away from the Rio. And while many of these series are coming to a close, there are still a few ongoing events offering tournaments into July. Below are some of the WSOP alternatives where you can still get a seat in Las Vegas this summer.

On any given day in July, there are poker tournaments going on all across Las Vegas. (Image: VisitLasVegas.com)

Aria – The Aria Poker Classic has been running since June 2, and is still ongoing until July 14 with most buy-ins in the $240-$470 range. The focus is mostly on Hold’em, but mixed-game enthusiasts get some HORSE, Omaha Hi-Lo and other offerings. The series features the World Poker Tour 500 and its eight different starting flights, as well as the PartyPoker Millions, which has a $10,300 buy-in and $5 million guaranteed prize pool.

Binion’s – Binion’s summer series, which frequently changes names, was known simply as Binion’s Summer Poker Series this year. The tournaments began June 1, but you can still get in to the last events on July 1, which conclude with a $1,100 NLHE Championship, as well as a $1,100 HORSE Championship. Because it has limited tables for use, the events here feature no guarantees, and fields are usually below 200 players.

Golden Nugget – The Grand tournament venue once against hosted the Golden Nugget Grand Poker Series, running through the dates May 28-July 8. It’s perhaps the most ambitious schedule away from the Rio, with three to four tournaments running most days, including the near-daily $120 NLHE. Golden Nugget features one of the better mix of events, with plenty of like Big O and 8-Game among the offerings. 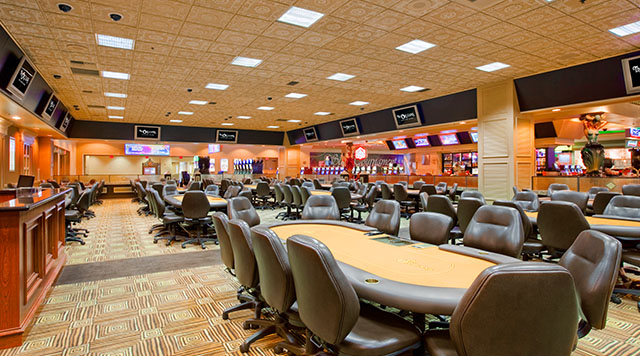 Orleans – The off-Strip property returned with its Summer Poker Series on May 28-July 7 featuring a nice variety of games. The home to most of the Omaha Hi-Lo action in Vegas unsurprisingly features plenty of tournaments in that format during its series, including a $400 PLO8 event with a $50,000 guarantee. The vast majority of the buy-ins during the series are budget-friendly $150, and a $400 NLHE Championship that started June 29 with a $200,000 guarantee. There are still multiple NLHE and HORSE events with smaller guaranteed prize pools remaining.

Planet Hollywood – The annual PHamous Poker Series made its return May 28-July 11 with a nice mix of events that include triple draw, stud, Omaha and more. The buy-in are definitely rec-friendly, with many in the $200-$300 range and frequent $100 events. Perhaps the most intriguing events on the schedule are a couple of “all-in or fold” tournaments in which players have just two decisions. It should be interesting to see how those play out.

Venetian – The Sheldon Adelson-owned (which makes many players avoid it completely) resort is famous for getting a head start on the summer competition – its Deepstack Championship Poker Series started May 13 and runs through July 28. Other than a handful of Omaha hi and hi-lo events, the focus here is on hold’em, which includes lots of bounty events and some survivor tournaments. This is probably the second-best place in Vegas for those with bigger bankrolls, as The Venetian offers a $3,500 NLHE tournament and a $5,000 main event.

Wynn – The Wynn Summer Classic runs May 30-July 16 and concludes with a $1,600 main event that begins on July 11 (with satellites on July 10). Most buy-ins are in the $500-$1,000 range, and all tournaments other than two PLO events are NLHE. The Wynn is known for good structures for events intended to conclude in a single day and among the lowest rake in town. Plus, parking here is free and you can even score free rooms now thanks to the Wynn Slots app.

interesting news! It hurts that I’m so far away from Las Vegas!

It should be very exciting to participate in one of those big events, but I’M so comfortable in front of my screen 🙂