The PokerStars Players Championship (PSPC) is only three weeks away but, before play starts in the Bahamas, there’s one more chance to win a Platinum Pass worth $30,000. 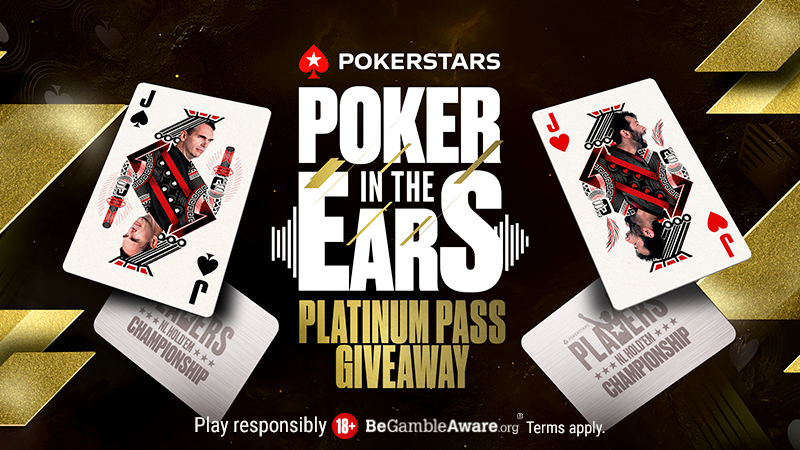 One player will win a PokerStars Players Championship Platinum Pass if they listen to the Poker in the Ears podcast and enter the prize giveaway. (Image: PokerStars)

The final PSPC Platinum Pass promotion was announced by James Hartigan and Joe Stapleton on the Poker in the Ears Podcast today. Players in Canada, the UK, and the US (excluding Florida, and the states of New York and Washington) can enter now for a chance to win a PSPC prize package.

Full details on how to win are discussed on the podcast (above). For those who haven’t got time to tune in, PokerStars’ Discord channel is where the journey begins.

Eligible players have until 00:01 (GMT) on January 16 to complete the steps listed below. Those who successfully enter could win a free trip to the Bahamas and a seat in the $25,000 PokerStars Players Championship.

Entrants who complete the steps above will receive a survey link via email on January 16 and they must complete it as soon as possible.

Submitting your answers swiftly is crucial because only the first 50 responses will advance to the next stage of the competition.

Final 50 must be dialed in to win

The 50 fastest respondents then have to play the waiting game. Hartigan and Staples will call one finalist on January 18 between the hours of 16:00 and 18:00 GMT. That player has to pick up the call and answer a trivia question about the PSPC, the Bahamas, or the PokerStars Caribbean Adventure.

If that player doesn’t pick up the phone, or they give the wrong answer, they’re out. Hartigan and Staples will move onto the next random finalist until someone gives the correct answer. That person will win a Platinum Pass for the PokerStars Players Championship.

As well as a seat in the $25,000 poker tournament, the winner gets money to cover their flights and stay at Baha Mar resort. Platinum Pass winners and qualifiers will also be treated to a variety of once-in-a-lifetime experiences during their time in the Bahamas.

For personal insights into this year’s PokerStars Players Championship, as well as stories from the felt, check out our exclusive coverage from January 29.