Justin Bonomo, never one to hold his tongue on controversial issues affecting the poker universe, thinks PokerStars is letting players win money without doing a thing but register for tournaments. ‘ZeeJustin’ said in a Twitter post earlier this week that the poker site “let non-players take thousands from tournament prize pools without playing a single hand.” 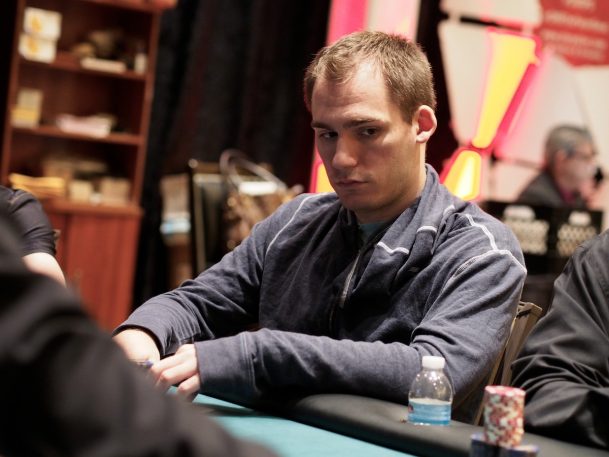 Justin Bonomo has accused PokerStars of using a refund policy on canceled tournaments that gave players an opportunity to make money without playing a single hand. But some players say it’s the pot calling the kettle black. (Image: seminolehardrockpokeropen.com)

The poker pro provided (via the screen shot shown below) detailed evidence that suggested PokerStars allowed players to take advantage of a loophole to win money on tournaments that were canceled due to a server crash, without playing any hands at all.

At 2:42 pm PST on Monday, May 15, many PokerStars players were disconnected for an extended period of time. As of 3:05, tournaments were paused. Users couldn’t log back in until 3:47. Some tournaments resumed at 4:10, but most were canceled.

Emails with refund details were sent to players in canceled tournaments at 4:45. The email read as follows:

When a tournament is canceled before players are in the money, we refund each player the tournament fee, and then divide up the prize pool based on the following formula:

50 percent of the award pool distributed evenly between remaining players.

50 percent of the award pool distributed proportionally according to the chip count.

The payout method seems reasonable until Bonomo, and others, explain how easy it would be for players to exploit this and win money without even playing a hand. In a group chat with other poker players, ZeeJustin discussed the issue more than an hour after the servers went down. 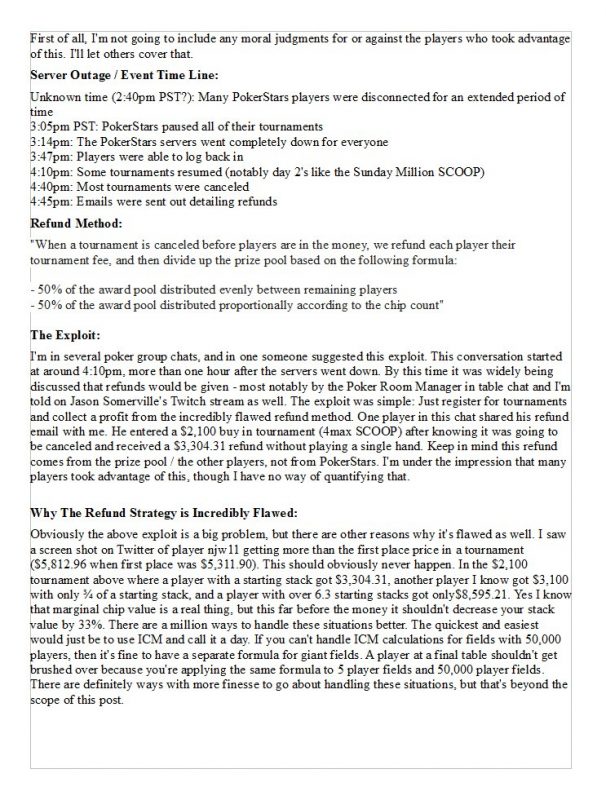 “The exploit was simple: just register for tournaments and collect a profit from the incredibly flawed refund method,” he wrote.

Bonomo claims a group chat member said he entered a $2,100 buy-in tournament knowing it was going to be canceled and collected $3,304.31 without playing a hand.

“Keep in mind this refund covers the prize pool / the other players, not from PokerStars. I’m under the impression players took advantage of this, though I have no way of quantifying that.”

Bonomo also shared another problem with the payout method used for canceled tournaments that were already underway. He said he saw a screenshot proving a player received more than what first place would have paid.

“This should seriously never happen,” he opined.

Phil “OMGClayAiken” Galfond backed his claims up. The high-stakes pot-limit Omaha specialist said he saw players in a $2,000 buy-in 4-max tournament take advantage of the loophole.

Justin Bonomo is having a hard time dodging his own alleged cheating in the past. Some poker players who responded to his post questioned how an alleged internet poker cheater has the moral authority to make these accusations against PokerStars.

As a 19-year-old, Bonomo was accused of having multiple accounts at PartyPoker. In 2011, Prahlad Friedman accused him of playing under Isaac Haxton’s account to disguise who Friedman was playing against. After his first alleged cheating scandal, Bonomo committed to donating five percent of future tournament winnings to a charity. We do not know if he ever followed through on that promise.

How about getting an email saying you get a ticket for a tourney that was cancelled due to a server crash, and then they don’t give it to you ?? So, when you try to ask support about it , they just tell you how to “find” the tickets in your account (which of course was the first thing I checked when I read the email )
Of course , no ticket and no other ticket for another game of equivalent value.

It’s hard to figure that PokerStars, who is a popular poker site, can be scammed for an good amount of money…