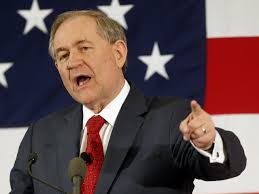 Jim Gilmore is the latest candidate to declare that he wants to be the Republican nominee for President of the United States. (Image: AP Photo/Jim Cole)

If the race for the Republican presidential nomination was a circus (and there are plenty who would argue that this isn’t a terrible description), this is about the time when the audience can’t believe just how many people are coming out of that little clown car.

Former Virginia Governor Jim Gilmore is the latest candidate to declare their intention to seek the GOP nomination for president in 2016, making him the 17th serious contender to seek the Republican bid to lead the country.

This isn’t Gilmore’s first run for the White House.

He announced his candidacy for the 2008 GOP nomination as well, though he came up well short, dropping out in July 2007.

He ultimately ran for the Senate in 2008 instead in his home state of Virginia, but lost that race decisively.

“I am a candidate for president because our current Washington leadership is guiding America on a path to decline, and I can reverse that decline,” Gilmore wrote in an announcement of his candidacy on Breitbart.com. “I have a vision for a different America, one that will return America to the policies of a dynamic, entrepreneurial free-market economy and a policy of peace-through-strength for our national security.”

Of course, Gilmore has quite the uphill battle to fight if he wants to be a serious contender for the Republican bid, let alone actually win it.

Gilmore is entering a field of 17 candidates that includes several heavyweights that are likely to overshadow him and any others who enter the race at this point without significant public support.

At the moment, the leader in all national polls is business tycoon Donald Trump, though this may say more about his name recognition than his long-term prospects for winning the nomination.

Only the top ten candidates in an average of major polls are being invited to that event, and Gilmore hasn’t even been listed as an option in most national surveys.

That lack of recognition could potentially also keep him out of a forum for lower-polling candidates scheduled for earlier that evening.

Gilmore’s announcement focused on issues like tax cuts, national defense, and a general opposition to the policies of President Barack Obama (and those of Hillary Clinton, the leading contender for the Democratic nomination).

While they didn’t touch on the issue of the Restoration of America’s Wire Act or online poker, however, there are some hints in his past that might shine some light on his feelings about the issue.

As governor, Gilmore came out against proposals to add casino gambling to the state, saying that existing opportunities to gamble were enough.

“We already have a lottery, horse racing, and bingo,” Gilmore once said as governor. “We don’t need more gambling in Virginia.”

On a similar note, he also opposed efforts to fund a potential baseball stadium in Northern Virginia (at a time before the Montreal Expos became the Washington Nationals) through the use of video lottery terminals. At the time, Gilmore expressed concerns about the potential addictiveness of “paperless” games.

These decisions came in a time before online poker was a major issue, but it would stand to reason that Gilmore would have similar reservations about Internet gambling.

The current candidates for the GOP nomination span a wide range of views about online poker, from South Carolina Senator Lindsey Graham, who introduced RAWA to the Senate this year, to Kentucky Senator Rand Paul, a libertarian who has championed the right for states to decide on Internet poker.