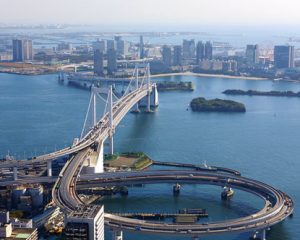 The Tokyo Bay area is one of the proposed sites for possible casino development should land gaming receive approval from Japanese legislators. (Image: destination360.com)

Japan has experienced the same rise in online gamers as other countries in Asia and Europe in the past decade. The most recent research from the mobile gaming market is proof, and shows just how much potential growth is lurking in the industry.

Meanwhile, the Japanese government inches closer to authorizing brick-and-mortar casinos in some of its largest cities, which will encourage tourism and launch a new source of revenue for a nation that has suffered greatly from the 2011 earthquake and tsunami, and the subsequent nuclear crisis. Japan’s economy was and continues to be harmed by the disaster, and a new industry could help catapult the country back to health.

The most recent study on the Japanese mobile gaming market was released by advertising and marketing company CyberZ at the beginning of April. The market was valued at 546.8 billion yen, or approximately $5.4 billion, in the year 2013, which was a substantial increase from the 311.1 billion yen value in 2012.

The report showed that Japanese mobile gamers make up about 50 percent of the country’s overall gaming industry, an increase of more than 20 percent from the previous year. In addition, growth is predicted to continue in waves as CyberZ anticipates the Japanese market may increase to 658.4 billion yet in 2014 and climb to 746.2 billion yet in 2015.

This news comes just after a report by Gaming Technologies Association that Japan has more than 4.5 million legal gambling machines in the country, the most of any nation in the world. The United States was second on that list, with 889,070 machines, followed by Italy with more than 412,000.

Casinos Close in on Legalization

The conversation among Japanese officials regarding land-based casinos seemed to gather steam upon the awarding of the 2020 Summer Olympic Games for Tokyo. The committee that fought for the Olympic Games estimated that Japan will see a positive economic influx of approximately $30 billion, with the bonus of creating 15,000 jobs. A casino industry that could rival that of Macau could only boost those numbers.

Talk of a new casino industry spurred industry operators to begin proposing projects for places like Osaka and Tokyo, which are said to have the potential to rival the multibillion dollar industry of Macau. Some industry analysts predict that a Japanese casino market could start with $10 billion to $15 billion in annual revenue and rise from there.

The bill currently under consideration by the Japanese government has the potential to pass in the spring of 2014, which could encourage development of casino projects within the year that follows. Mitsui Fudosan has already proposed the first casino and resort project for Japan that would be completed by the 2020 Summer Olympics. The Odaiba project is eyeing the Tokyo Bay at the current time.

Others have indicated great interest in the area as well. Galaxy Entertainment of Hong Kong could spend approximately $4 billion per casino location on which they would be allowed to build. Sheldon Adelson’s Las Vegas Sands is prepared to invest $10 billion in the market or “whatever it takes,” according the wealthy mogul. “We could pay all cash,” he added.

MGM Resorts also indicated a great amount of interest and intends to spend $5 billion to $10 billion on casinos in the Tokyo area.