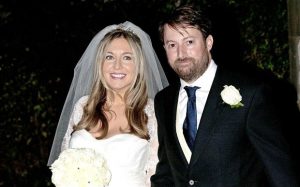 Victoria and David Mitchell were media favorites from the moment of his proposal and their marriage.(Image: Rex Features)

As we reported last week, on Easter Sunday, April 20, Victoria Coren Mitchell won the European Poker Tour Sanremo Main Event in Italy. It was significant for a number of reasons. Beyond the €476,100 ($657,787) first place prize, her victory has the potential to create another proverbial poker boom in an industry that has long needed a new popularity boost.

The Monday morning coverage of Coren Mitchell’s EPT win was vast in the UK and quickly became the third most popular story on the BBC website. The story was in the Entertainment & Arts section of the website, noting that the journalist and broadcaster had now made poker history.

The Guardian covered the story in its headlines, writing that the “writer and television presenter” overcame the odds to win the tournament. The Telegraph noted that the “quiz show host” made poker history. And The Mirror referred to the historic nature of the BBC Four presenter’s victory as well.

Coren Mitchell is well-known in the UK for her many accomplishments, not just as the daughter of famed broadcaster Alan Coren and sister of Times journalist Giles Coren. She is a star in her own right, having graduated from Oxford with a first-class degree and become popular as a writer and television personality.

Her credits on television shows include “Room 101,” “Have I Got News for You,” “Question Time,” and her current recurring role as presenter on BBC 4’s “Only Connect“. In addition to authoring a book about her life in poker called “For Richer For Poorer: A Love Affair with Poker” and other tomes, she is a regular columnist for The Guardian and The Observer in the UK. Her commentary on political and social issues injects humor into thoughtful columns that connect with her readers.

Her 2012 engagement to actor and comedian David Mitchell made the entertainment news in the UK, and their November 2012 wedding was covered by many media outlets. He was with her in Sanremo when she won the tournament and celebrated the victory with her. Coren Mitchell tweeted to her 239K Twitter followers upon her win, and Mitchell did the same to his 1.32 million followers.

“My wife just won her second EPT Main Event,” he wrote. “Nobody’s ever been able to say that before. She’s amazing. #resistingexclamationmarks #EPTLive”

Could She Initiate a Boom?

Coren Mitchell has been a leader in poker, not just as a Team PokerStars Pro, but as the first woman to win an EPT Main Event, which happened in London in 2006. Her ability to talk about poker in real terms, make it understandable to casual players as well as fellow pros, and maintain a realistic attitude about the chances of winning have made her a fan favorite for nearly a decade in the poker industry.

She will undoubtedly be interviewed about her poker victory for UK publications and television shows, which will only encourage interest in the game for more people who may have not considered playing before. Coren Mitchell’s relatable personality is one that may well start a snowball effect for the game she respects.

Time will tell. The true effect of Coren Mitchell’s Sanremo win will take time to manifest, but if the initial reaction in the UK is any indication, there could easily be a UK poker boom on the horizon.

Good article. Vicky is pretty dang cool. It would be great if her win started a lil poker boom.