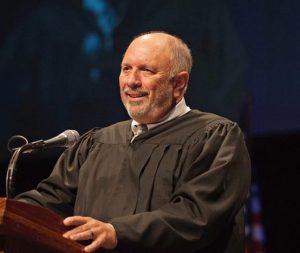 Judge Anthony J Battaglia, who will hear the case, has already rejected the Iipay’s legal argument when granting an injunction on its bingo site last December. (Image: sdmesa.edu)

The Iipay Nation of Santa Ysabel will face a joint lawsuit from the federal government and the State of California that seeks to put an end to its online gaming ambitions.

The Iipay had vowed to go it alone in California and launch an online poker site regardless of whether the state and its squabbling poker stakeholders opted to regulate it or not.

The tribe believes it is its sovereign right to do so and that it has justification under the Indian Gaming and Regulations Act 1988 (IGRA).

Last November, in order perhaps to test the waters for its “imminent” online poker site, it launched a bingo site, DesertRoseBingo.com. California’s legal action came swiftly demanding a federal restraining order that suspended the bingo site’s operations until the matter could be resolved in the courts.

In an accompanying lawsuit California accused the tribe of violating its gaming compact with the state.

The US Attorney’s office followed suit, accusing the tribe of being in breach of the Unlawful Internet Gambling Enforcement Act 2006 (UIEGA).

US Southern District of California Magistrate Judge Nita L Stormes has ruled that both these cases will now be heard as one and has set a date for the trial, February 9th, 2016.

It will be heard by US District Judge Anthony J. Battaglia, who granted the temporary restraining order on DesertRoseBingo.com last December.

The Iipay are sticking to their conviction that IGRA permits Native American operators to offer Class II gaming, specifically poker and bingo, on tribal land.

However, the bill was drawn up a year before the invention of the World Wide Web itself, and thus no provision has been made for remote gaming, where most participants will be situated outside tribal land.

But in last December’s ruling, Judge Battaglia said that in his opinion online bingo was not Class II gaming at all, but Class III. The definition of Class III gaming is broad, and includes most casino games, but crucially it also includes “electronic facsimiles of any game of chance.”

Tribal Class III gaming must be licensed by the state under the statutes of IGRA, and thus, by taking the games online, the tribe was in breach of its compact, he ruled.

In the wake of that ruling the Iipay’s message remained defiant. “The Santa Ysabel Tribe looks forward to vigorously defending its legal, well-regulated VPN-aided Class II bingo enterprise in federal court,” it said on its website.

“The District Court’s mistaken reliance on outdated case law and its misinterpretation of the construct of Santa Ysabel’s bingo games resulted in issuing its misguided decision.

This decision threatens the tribal sovereignty of all tribes, and sadly denies the Iipay Nation of Santa Ysabel the ability to provide vital services and opportunity for its Tribal membership.”

The Iipay formed its gaming compact with the state in 2004 and ran a land-based casino until 2007, when its closure left the tribe millions of dollars in debt.

the Barona Casino in San Diego, Ca shut down its ‘freeplay online poker’ site recently . I guess their tribal council decided real money online poker was not coming to California in the near future . they had a fun site , and awarded prizes that could be redeemed at its brick + mortar casino poker room .