In the first major live poker tournament in the US in nearly a year, a relatively unknown Ilyas Muradi took down the main event of the World Poker Tour’s Lucky Hearts Poker Open at the Seminole Hard Rock in Hollywood, Florida. For Muradi, it was a $620,000, life-changing score. For a poker community starved for major tournament action in the face of the coronavirus, the whole series was like a breath of fresh air. 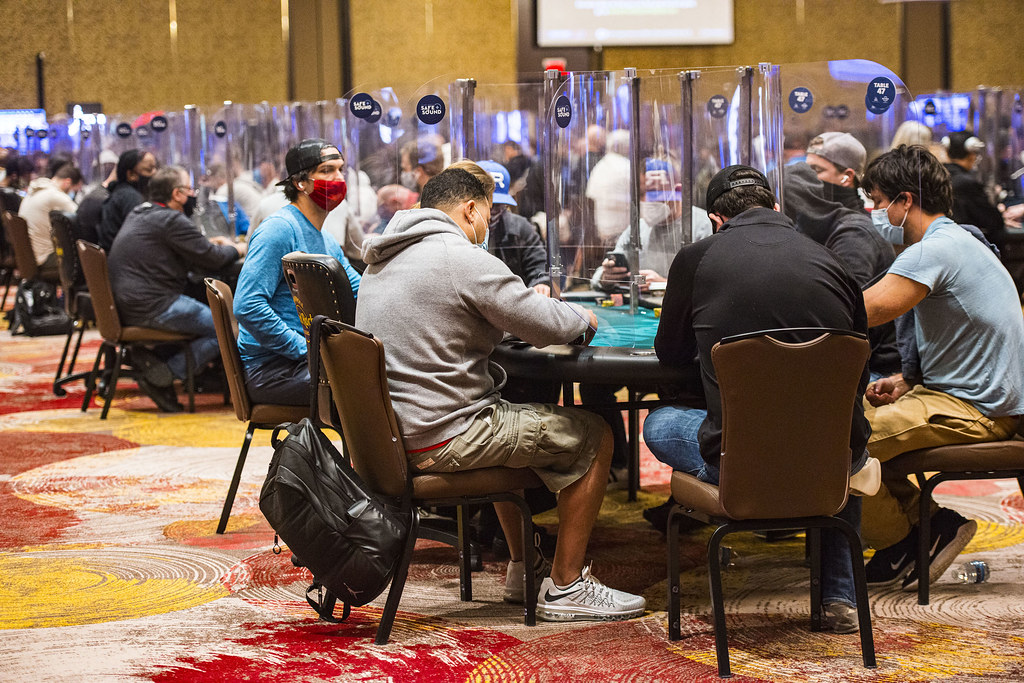 In the first major live event since the pandemic struck, the $3,500 tournament drew a massive field of 1,573 entries — nearly twice the size of 2020’s event. Opening play was split over two Day 1s, with 197 players finishing in the money.

The 2021 Lucky Hearts was the third biggest WPT Main Event in the tour’s 18-year history. The field was so large that the event surpassed its $1 million guarantee more than five-fold, with a $5,033,600 prize pool.

But it wasn’t just the chance to be on a televised WPT event that was the draw. The tournament series consisted of 26 events over the previous two weeks (as well as several smaller tourneys and satellites), and almost all of them broke field-size records.

Florida’s COVID-19 cases have been on a sharp rise since June, but that hasn’t stopped Gov. Ron DeSantis from championing the state’s openness for businesses and schools. The Sunshine State has so far logged nearly 1.7 million coronavirus cases, and more than 25,000 virus-related deaths.

Personal finance website Wallethub ranks Florida as the fifth-least restrictive state. According to CDC figures, their per capita infection rate ranks 30th in the country.

And while Florida has no state-wide mask mandate, Seminole gaming authorities instituted mask-wearing requirements at all their casino properties this past summer.

“I was really shocked by the amazing turnout,” WPT Executive Tour Director Matt Savage told CardsChat News. “It was my first live event in nine months, too, so I was a little nervous about many things. But when I arrived and saw the incredible amount of safety procedures, I felt much better.”

Savage credited the casino’s “Safe and Sound” program for making everyone comfortable. “The dealers and staff did a great job upholding the stringent protocols,” he said.

COVID-19 concerns aside, the event reminded us of all the interesting storylines that can develop at a live tournament. Elias, who holds nearly every WPT record (four titles, 12 final tables, 42 cashes), picked up where he left off before the pandemic. He came just four spots shy of his 13th final table thanks to a bit of a cooler on his final hand — pocket jacks against Andy Hwang’s pocket queens — on which he was eliminated in 10th place for $79,455.

With the WPT’s GOAT out of the way, the attention shifted to Ronnie Bardah, who was stacking chips. Those who follow the CBS reality TV game show Survivor likely remember Bardah as the first contestant voted off the island during the Island of Idols season in 2019. He lasted just three days before being sent packing.

At the WPT Lucky Hearts Poker Open, a $3,500 buy-in event, he fared much better, finishing in third place. Bardah, Muradi, and runner-up Robel Andemichael agreed to a three-way chop, with each player receiving more than $500,000.

Due to the chip stack sizes at the time of the agreed-upon chop, Muradi took the biggest share ($580,000). Bardah earned $566,135, and Robel Andemichael took home $545,500. The three agreed to play the tournament out for the remaining $25,000 in the prize pool, along with a spot in the season-ending WPT Tournament of Champions. 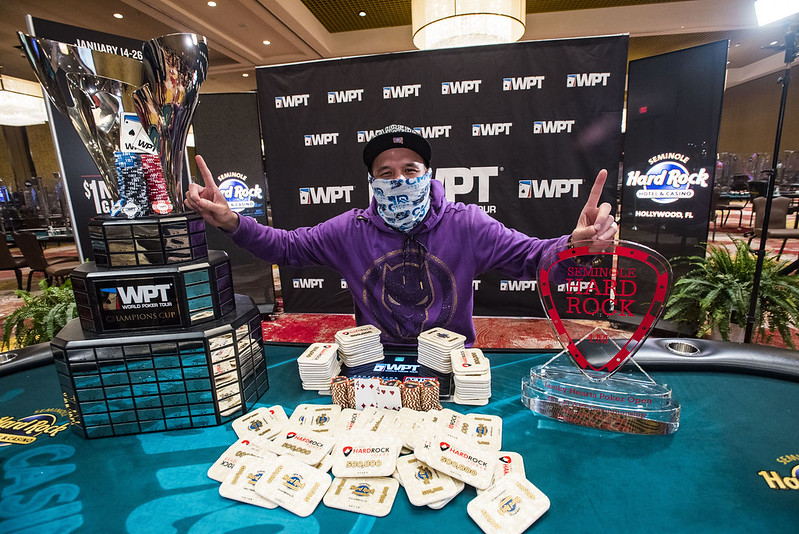 Ilyas Mulardi is the first major live poker champion in the US since COVID-19 hit. (Image: WPT)

With the chop settled, play continued for more than four hours, an unusually long three-handed session. None of the players were ready to just go home and take their huge payouts. They each had their sights set on joining the World Poker Tour Champion’s Club.

Bardah, a 2012 WSOP bracelet winner and 2010 24th-place WSOP Main Event finisher, moved all-in with A-2 against Andemichael’s A-9. The former Survivor contestant almost got lucky as the flop of K-4-2 hit him, but a 9 on the turn sent him packing in third place.

Muradi and Andemichael then battled it out for WPT glory. Neither player had ever cashed in a World Poker Tour event. In fact, Muradi’s only previous tournament cash came last week at the Seminole Hard Rock — $975 for a 46th place finish in a $600 NLH event.

“I actually came here for small events because my bankroll wasn’t enough to play events like this,” Muradi told tournament reporters. “But I got the opportunity because I missed my flight and I came back and played a satellite, and won a seat.”

After more than two hours of back-and-forth play, and Andemichael down to just 15 big blinds, the inexperienced live tournament players decided it was time to race, and got all the chips in the middle. Andemichael held A-6 of diamonds and his opponent had pocket fours.

The board ran out 10-9-8-3-Q with no diamonds, and Muradi was declared the champion. He fell to his knees with emotion.

“In the field were a lot of amazing players,” Muradi said. “I don’t have as much experience as them, but now I’m the winner. This is amazing. It’s making me want to cry. ” 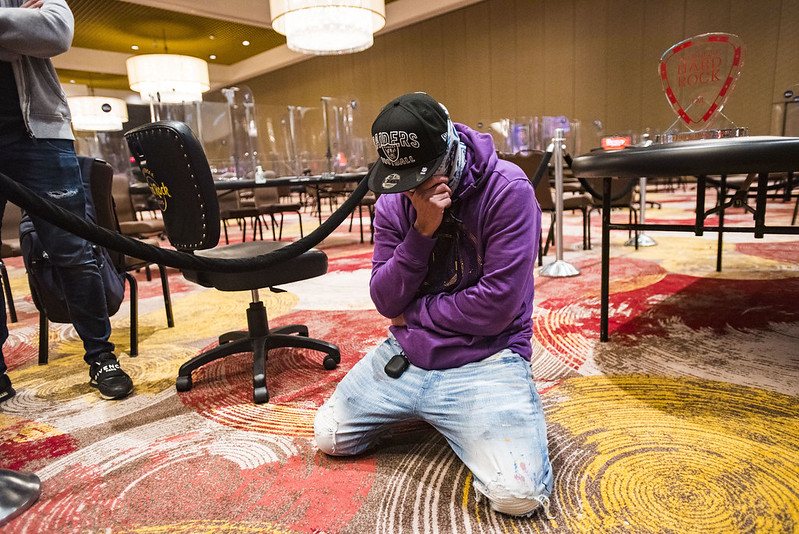 The first live tournament winner of 2021, socially distanced and now more than half a million dollars richer. (Image: WPT)

Despite increasing restrictions, and a recent study showing a strong correlation between Vegas travel and regional spikes in infection rates, more live tournaments are coming soon.

The World Poker Tour’s current season will continue on Feb. 19 in Russia at Casino Sochi. After that, the tour is headed to Las Vegas for $5,000 WPT Venetian, beginning Mar. 4.

It will undoubtedly be “bad for poker” if people attending live tournaments get sick. However, if players are able to keep themselves safe as vaccination rates rise, then it could be events like the Lucky Hearts Poker Open in 2021 that show the world returning to normalcy.