Just How Bad Can Variance Really Get? These Bad Beats Remind Us How It Works

Good advice or not, these can be hard warnings to conceptualize. Sure, it’s easy to imagine pocket kings getting cracked by pocket threes. We’ve all seen it happen, and any poker player who’s been around the block likely won’t bet their house as an 80% favorite. 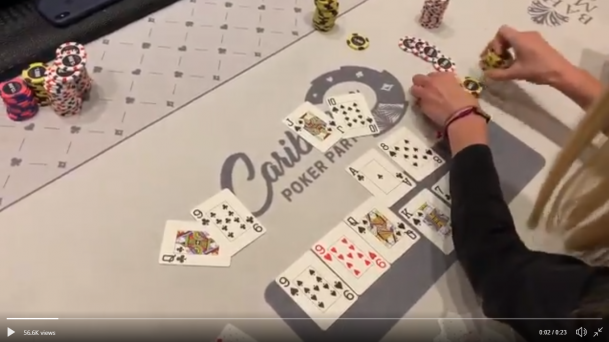 Bad beats happen — if when you run it twice, or more. (Image: CardsChat)

These aren’t hypothetical questions. Bad beats happen — and yes, you can be on the losing side of them.

What about running it twice? Try this one on for size:

Susie Q has A♥ K♥. Randy has A♣ A♠. They’re all-in preflop and run it twice — using the same deck. Susie Q scoops the first runout with a flush, eliminating three hearts, including the jack and 10 of hearts, thus reducing her straight outs for the second run-out. But, she makes a straight anyway.

Assuming you were the one holding the aces, how much would you have been willing to risk in this matchup? Randy dropped nearly $10K.

Okay, okay, you may be thinking. Run it once and you get unlucky. Twice too. But three times? There’s no way.

Watch this hand between Phil Hellmuth and an amateur on PokerStars The Big Game:

They run it three times. Phil is 0/3. Un.be.lie.va.ble. (Again, it’s the same deck, so many of the rec player’s outs have already been used.)

As apps like PokerBros and its competitors become more common, running it multiple times is becoming more popular – and offering players a false sense of security. Running it 3x reduces variance, but is not a magic immunity wand.

Horrendous suckouts on apps can seem more common. The reason why is that you’re playing a drastically greater number of hands. The average live poker table goes through 30 hands/hour, while online it’s 90/hour. Multiply that by how many tables you’re playing, too, and it’s easy to see why online variance can seem much more brutal.

When you’re playing hundreds of thousands of hands, it’s much more likely you’ll fall victim to that freak half-a-percentage point — and may even do so on the regular.

As Jonathan Little, a well-respected professional poker player and my fellow author at D&B publishing likes to say, “volume beats variance.” These “bad beats” are flukes, and they are indeed beatable. You’ll just need to run it a whole lot more than three times.

Chance of a Lifetime?

Regardless of how many times you get to run the cards, as poker players, we need to have a clear idea of just how much we are willing to swing.

Binger commits virtually all his chips with his top pair. Gold goes all-in with his straight draw and Wasicka has a decision — should he risk all his chips on a big combo draw?

Mathematically, Wasicka is the most likely to win. But, 54% is still just slightly better than a coin flip, and the pay jumps are huge. First place wins $12,000,000. Second place wins $6,102,499. Third place wins $4,123,310. Not to mention the sponsorship opportunities accompanying the title — estimates The Poker Guys value at another $7 to $10 million.

At the bare minimum, this is a $2-million decision (the pay jump between second place and third place), for a hand that’s a little more than 50/50. That’s enough to make anyone queasy.

What would you do?

An extremely distressed Wasicka eventually made the fold. And yes, he would’ve won the hand.

Wasicka finished the tournament in second place. Gold went on to win the Main Event, and the rest is history.

While there may not be a way to prepare for such a high-variance decision — the Main Event is the Main Event after all — take some time to think of what you can stomach, and adjust your stakes accordingly.