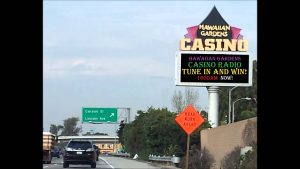 The Hawaiian Gardens Casino is the latest California card club to feel the wrath of FinCEN for failure to comply with the Bank Secrecy Act. (Image: Youtube.com)

Hawaiian Gardens, one of the major California card clubs allied with the push for online poker in the state, has been fined $2.8 million for repeated anti-money laundering (AML) violations.

The Gardens is the latest in a long list of California card clubs to catch the attention of the Financial Crimes Enforcement Network (FinCEN) for a laxity in its AML protocols.

The Normandie, which had been in the same family since it opened in 1947, lost its license last year after federal money laundering charges. Its management was accused of having contracted independent promoters to attract high-rollers to the casino, while deliberately failing to report the resulting valuable transactions to the Treasury. Now, as convicted felons, they are unable to be considered for licensing in California.

Last year, the Palomar Card Club and the Seven Mile High Club, both in San Diego were raided by the FBI and accused of permitting an illegal Mafia gambling ring to launder money at their establishments.

According to FinCEN, Hawaiian Gardens had failed to implement and maintain an effective money laundering program and to report large transactions and suspicious activity on its premises. It had also failed to address problems flagged by an IRS investigation into its AML compliance in 2011, and then again in 2014.

The casino has admitted to violating the Bank Secrecy Act’s (BSA) program, said FinCEN, and has “agreed to future undertakings, including periodic independent reviews to examine and test its BSA anti-money laundering program.”

Since the passage of the Money Laundering Control Act (1986), it has been a requirement for all US financial institutions, including casinos, to file a CTR to FinCEN for any currency transaction over $10,000, as a measure to combat money laundering.

Lacked the Culture of Compliance

“The Gardens lacked the culture of compliance required to effectively manage its anti-money laundering responsibilities,” said Acting FinCEN Director Jamal El-Hindi in a press release this week. “It ignored the IRS findings, and the findings of its own consultant, thus allowing these violations to go on for years.”

“The Gardens continued to conduct business with patrons they themselves had identified as suspicious even after these customers repeatedly refused to provide identification information,” he added.

The Gardens has accepted the fine and has committed to improving its AML procedures, announced FinCEN.

Why is Hawaiian Gardens Allowed to stay in business when the other clubs, that were fined for doing the same thing were forced to close. This can not be legal force smaller clubs to close while allowing larger clubs to stay open.

Hawaiian Gardens could afford the fine. The Normandie Club couldn’t HG might actually be the busiest of the L.A. Area Card Rooms. The Commerce Casino has the most tables, but they spread a lot of weird games. The Bike is more famous, but doesn’t have all that many tables. Hollywood Park, doesn’t have all that many tables, and many are empty, but it is closest to the West Side of L.A.

The Hustler is a small Casino, and Larry Flint bought the Normandie club just for more room. And better parking.