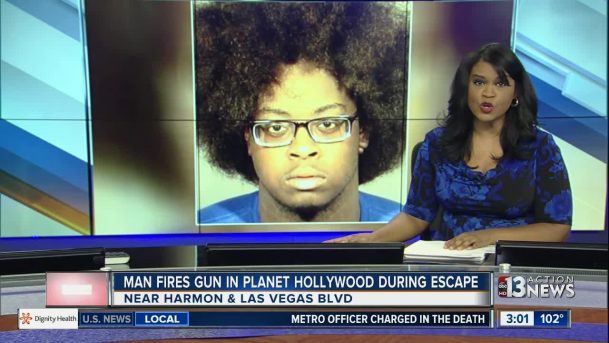 Rayshawn Strickland made headlines on Tuesday for all the wrong reasons. His friend stupidly discharged a gun inside Planet Hollywood, and now he’ll pay the price. (Image: KTNV Las Vegas)

A Shot Rings Out

When they caught up with one of the suspects, an unnamed 17-year-old male, a struggle occurred and he reached for a handgun near his waist. Officers attempted to stop him and during the fracas the gun discharged into the floor, sending nearby patrons into a panic.

The suspect was arrested and is facing a concealed weapon without a permit charge. Meanwhile, the other suspect, 19-year-old Rayshawn Strickland, was arrested after a warrant for his arrest for unlawful use of a motor vehicle was discovered in Oregon. He is also accused of carrying a concealed firearm.

No one was injured in the shooting, which occurred near a bank of slots on the main gaming floor. While the gunshot could be heard throughout the casino, it fortunately took place away from the 2017 Phamous Poker Series Goliath, which is held on the mezzanine.

The Planet Hollywood often offers a wide variety of tournaments at different buy-ins, and their latest poker series kicked off on May 15 and will run through July 13. During that time, dozens of events will be held awarding more than $7.5 million in guaranteed prize pools. That includes the Goliath 2017 Main Event $2 million GTD on June 28.

While it wasn’t exactly a poker crime, the shooting came at a tense time due to a prior incident that made headlines.

According to reports, on May 14 police officer Kenneth Lopera, 31, used a stun gun seven times and applied a chokehold on 40-year-old Tashii Brown after a chase through The Venetian.

Brown, who was intoxicated with methamphetamine at the time, subsequently died of asphyxiation. His death has been ruled a homicide.

“The policy … states that once the suspect has been exposed to three cycles of the Taser or the electronic control device, it shall be deemed ineffective unless exigent circumstances exist,” Las Vegas Metropolitan Police Department Undersheriff Kevin McMahill said at a May news conference. “Officers are taught to transition to another tool.”

It was revealed this week that Lopera, who thought Brown had tried to hijack a vehicle, was arrested and charged with involuntary manslaughter charge after video show he used the stun gun repeatedly despite the suspect being on the ground with his hands behind his back. He also applied an unauthorized “rear naked chokehold” for an extended period of time.

Lopera, who was released on a $6,000 bail paid by the Las Vegas Police Protective Association, faces up to eight years in prison.

What an idiot and fool this guy was. First off he’s underage and he knows it beforehand next he’s packing a strap has no I.D. and hair looks unkempt gambling at a major Casino. Lastly he’s with and even younger African American who also has no I.D. All a recipe for trouble.