WSOP history was made in Pennsylvania on Sunday when GunsBlaring won his first online bracelet. 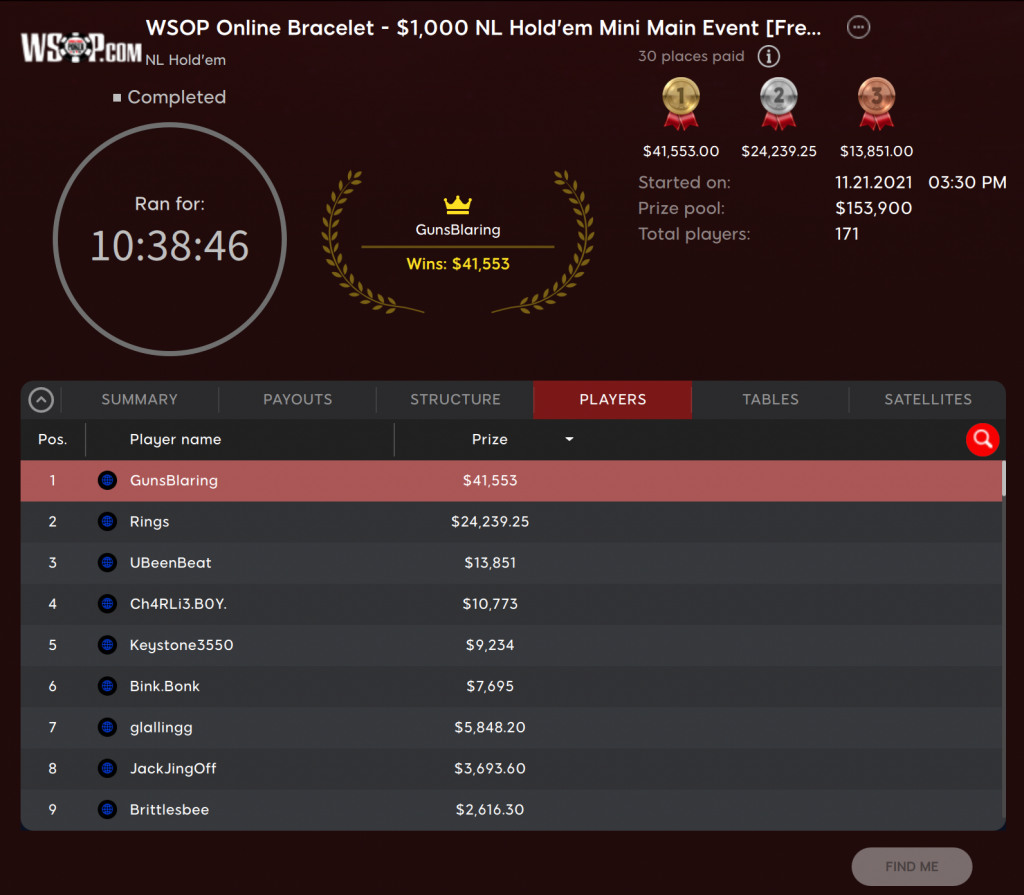 WSOP.com Pennsylvania’s $1K No-Limit Hold’em Mini Main Event attracted 171 Pennsylvania players who built a prize pool worth a total of $153,900. The tourney didn’t carry a guarantee.  WSOP Pennsylvania has been having some trouble meeting its promised guarantees this fall and had to overlay more than a quarter-million dollars in its Fall Online Championship Series.

The top-30 finishers cashed in the freezeout that had players try to work their 60K starting stack into the top prize of $41,553.

GunsBlaring has played only six tournaments on WSOP Pennsylvania, all but one of which carried buy-ins of more than $500, according to Sharkscope, a site that keeps tallies on online players.

Because Pennsylvania is a self-contained market, players in the state can only compete with one another, which limits the size of the games and tournaments on offer within the state, and — as a result — the number of bracelets available to be won.

Outside of Pennsylvania, however, things are a little different, as players in neighboring New Jersey — which shares its player pool with Nevada — were able to compete for WSOP bracelets throughout October and November. With a total of 10 bracelets available to players in those states, Daniel “SilasSilver” Turner won his first WSOP bracelet in the final Online Gold Bracelet Event of the series, the $1K Mini Main Event.

Turner outlasted 773 other entrants, each of whom put up $1,000 to compete in the freezeout, turning his buy-in into a first-place prize worth $142,663

Running each Sunday from Oct. 3 through Nov. 21, WSOP.com’s Online Bracelet Series did more than just provide players who couldn’t make their way to the Rio with the chance to compete for poker glory. The tournaments also proved popular with many players — both pros and amateurs — who multi-tabled in the events while also competing in live tournaments in Las Vegas.

Some, like Jason Koon who won his first WSOP Bracelet early in the tournament, nearly final tabled two events at the same time. Koon finished ninth in a live, $25K 8-Max high roller event at the Rio while, at the same time, finishing sixth in a $5,300 freezeout on WSOP.com.

Overall, more than 7,700 players tried for online bracelets while playing online in Nevada, New Jersey, and Pennsylvania during the 2021 World Series of Poker.