Who says there’s no free lunch? Not the good folks at Grosvenor Casinos who showed their gratitude to NHS workers in Britain by providing free meals for health workers.

Like many of the biggest companies in the UK, Grosvenor has stepped up to help those on the frontlines. With Britain’s National Health Service (NHS) at breaking point, “Grosvenor With You” gave those fighting coronavirus a small, but much need, break.

The free lunch initiative was run in conjunction with Blue Light Card, Uber Eats, and Absurd Bird. Any NHS worker with a Blue Light Card was entitled to a special Uber Eats code valued up to £15/$18. They could then use the voucher to order a meal of their choice from Uber Eats.

The show of support came as businesses across the country stepped up to do their bit to help overworked health care providers. Outside of gaming, big-name retailers such as Marks & Spencer, Tesco, and Aldi have all given NHS staff special access to stores. 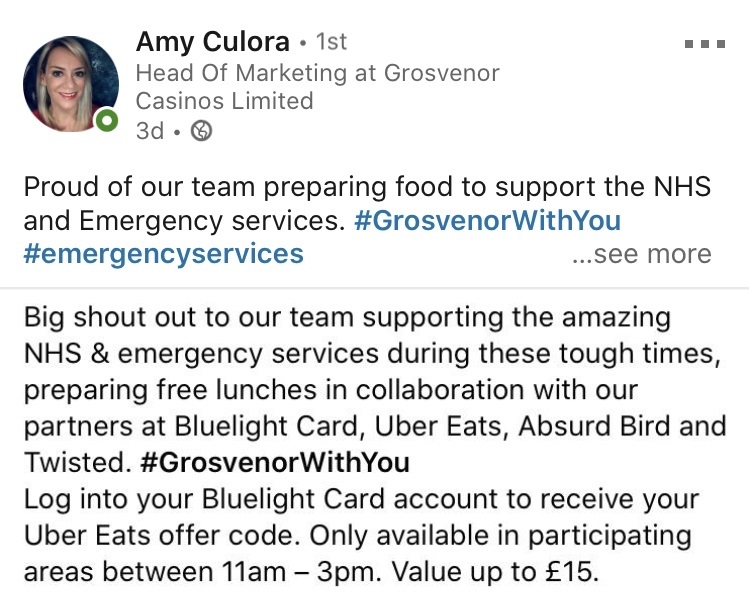 A LinkedIn posting from the Grosvenor’s head of marketing shows the casino taking an active role as a community supporter during this time of crisis in the UK. (Image: LinkedIn)

Food and beverage companies such as Yo! Sushi, Costa, and Just Eat have also offered workers extra discounts and privileges. With everyone pitching in, gaming and betting operators have taken action.

Partypoker recently announced a special charity tournament for the NHS. Taking place on April 16, the $62 MTT is only open to Brits. At least 50% of the prize pool will go to NHS, and Partypoker will match anything raised by players.

The Jockey Club has also done its bit for charity in recent weeks. Through its April 4 Virtual Grand National, the British racing organization raised $3.2 million for the NHS. Now, Grosvenor Casinos has helped in its own unique way.

With its online gaming platforms attracting record numbers, a free lunch was the least Grosvenor could do. Although it was a one-time deal, the coronavirus crisis is far from over, and that could lead to more acts of kindness.

British Prime Minister Boris Johnson is currently recovering from the virus. However, when he returns to office, his next major decision will be whether or not to extend the UK’s lockdown.

Residents are entering a fourth week of quarantine measures. Online gaming companies have benefited from people staying indoors, but other businesses are suffering. Things will change eventually but, until then, gaming operators in the UK aren’t taking their fortunate position for granted.

Grosvenor Casinos has done its bit and, as we move closer to a resolution, we can expect more charitable efforts from other operators and players themselves.