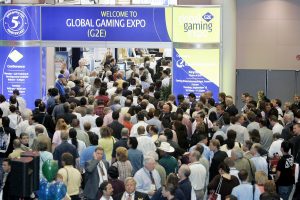 Four important gaming conferences have been scheduled for the coming months. The largest will be the Global Gaming Expo, also known as G2E, in Las Vegas, and others will also highlight speakers from some of the largest and most influential gaming companies in the world. All will feature speakers, panels, and discussions regarding the future of gaming, which inevitably focuses heavily on Internet poker and gambling.

The first gaming conference on the fall calendar will be one held by the Gaming Standards Association. A two-day workshop in London will focus entirely on Internet gaming at the Hilton London Paddington Hotel on September 16-17.

The GSA will offer the opportunity to discuss the organization’s standards as well as its potential and influence on regulations and the online gaming industry in general. Regulators and industry executives are expected to participate.

President Peter DeRaedt noted that the European market is the largest for Internet gaming at this point in time and the workshop is “critically important” to discuss its current state and future from a “technical standards perspective.”

The Global Gaming Expo is arguably the most well-attended and popular gaming conference in the world. The next edition of G2E is scheduled for Las Vegas from September 30 to October 2 at the Las Vegas Sands Expo. While the conferences, seminars, and exhibitions will focus on all aspects of the gaming world, Internet gaming will certainly be at the forefront of many discussions.

Steve Wynn is one of the keynote speakers, and the famously anti-Internet gaming Sands head Sheldon Adelson is the other. It is widely expected that the latter will use the podium to rail against online gaming as a development that could destroy land-based casinos.

Other speakers for the series include Amaya Gaming CEO David Baazov, who will likely discuss his company’s recent acquisition of PokerStars and Full Tilt Poker and the intent to move quickly into the US online gaming market. CEOs of companies like Aristocrat Leisure, IGT, and MGM will participate in the conference, as will the heads of companies like Seminole Gaming and MGM Resorts.

A new conference on the scene is the Summit of iGaming, Malta, which will debut in Malta this year. The activities will take over a large exhibition space at the Bay Arena on October 31 and November 1, as the conference expects to attract more than 500 delegates and more than 60 speakers.

The focus will be completely on Internet gaming, as explained by organizer Eman Pulis: “SiGMA 2014 will feature a five-star, state-of-the-art exhibition space for both interactive gaming suppliers looking for new and existing operators as well as operators looking to attract affiliates and marketing partners.”

The local Maltese Lotteries and Gaming Authority will have a major presence at the conference, considering it holds more than 450 gaming licenses for more than 250 Internet gaming companies.

This conference is in its second year and has already scheduled its activities for Sacramento, California, on February 26. The one-day series of panels and speakers will be hosted again by Pechanga.net and Spectrum Gaming Group.

The speakers are said to include various legislators, gaming regulators, tribal and other gaming operators, and Internet gaming experts. While the focus will be on US online gaming and that particular emerging market, especially California, there will be representatives from around the world with experience and information to add to the discussions.

Pechanga.net Editor-in-Chief Victor Rocha noted that Internet gaming issues are complex, and “the iGaming Symposium will explore in detail all aspects of the issues” by bringing “together the most important thought leaders in Internet gambling, tribal governance, and California politics. Anyone who may have a stake in the outcome of Internet gambling legislation in California will want to attend this conference.”

The conference SiGMA in Malta seems interesting. Lots of gaming companies based there already, wonder why it took so long to even organize something like this.