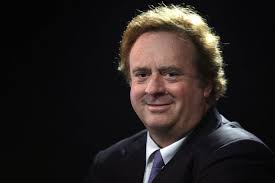 Gary Loveman spoke to KNPR about online poker and the future of Internet gambling in America. (Image: Kiyoshi Ota/Bloomberg News)

Online poker has plenty of potential in the United States, but it will need a wider player base in order to succeed.

That’s the opinion of Caesars Entertainment Chairman and former CEO Gary Loveman, who talked about Internet poker as part of an interview with KNPR, a Las Vegas National Public Radio station.

When asked about why online poker seems to have “stalled” in New Jersey and Nevada, Loveman pointed out that having more states on board would help drive growth, and expressed disappointment that regulation hasn’t spread as quickly as he had hoped.

“I think it stalled in part because we don’t have a sufficient population of people from other states playing to make the offering as compelling as it needs to be,” Loveman told KNPR. “This is one of the great frustrations of the years I’ve been in this industry is that something that is so intellectually straightforward has been so difficult to execute. The idea that Americans cannot legally play poker online…strikes me as almost crazy.”

While that frustration might not be going away any time soon, Loveman did say that he saw hope for online poker through an unlikely source.

“The solution for this is going to come from an unexpected place,” Loveman said. The major sports leagues in the United States, led by Adam Silver and the NBA, have decided that they favor betting on sports which is an online experience.

“And once the NFL moves to the point where they in fact favor this, I think you will see a federal action that legalizes sports betting, somehow defined at the federal level and virtually every state will participate. Once that Rubicon has been crossed, I think poker will very naturally fall in because it has an awful lot of similarities to fantasy sports.”

Loveman was also asked about the changing opinions of Senate Minority Leader Harry Reid (D-Nevada), who has seemingly aligned himself in most respects with Sheldon Adelson when it comes to Internet poker.

“I respectfully disagree with the senator, with whom I have had countless conversations on this topic,” said Loveman. “I think that the world is one where…virtually every transaction or decision is now mediated through a digital interface on some type of mobile device and the notion that the one thing you can’t do is to play a game of chance of skill for consideration on a mobile device, I just don’t understand the logic of that.”

Just last month, a Chicago bankruptcy judge ruled that the assets of Caesars Entertainment itself could be subjected to bankruptcy proceedings, though the company is appealing that decision.

Rulings such as that one could open the door to numerous lawsuits from lenders who believe that the company moved assets around to protect the best parts of the company from the bankruptcy hearings.

The potential for Caesars Entertainment itself to be liable for its debts caused the company’s share price to plummet 40 percent, though shares have recovered somewhat since the ruling came down.

It’s crazy how you can play daily fantasy sports but you can’t play online poker.

While it’s nice to see it’s coming back slowly in some states, it’s clear why it’s not picking up speed as much as they hoped in single states: It needs to be on a national/international level. I’m not sure why these casinos haven’t figured this out. Or why government hasn’t figured it out.

Other legitimate sites rose up from the ashes of the Full Tilt meltdown where most of the world plays along with the few Americans left. Why would one waste their time playing a few casual players in their state who probably think online poker is rigged and they’d rather “have fun drinking playing some cards in a casino).

Bring in a national site or international site and you’ll suddenly see a new poker boom in America. The casuals aren’t playing on their little state casino sites if they are playing online. Their on sites like America’s Cardroom and Bovada. A big casino in America could make a deal with these online international rooms and really do something good for poker in America. Not to mention nice tax revenue.