Phil Ivey isn’t the only one battling the Borgata in civil court. According to New Jersey court filings on Monday, former Washington Redskins running back Clinton Portis will be forced to stand trial December 6 for a $170,000 gambling debt he’s owed Atlantic City’s Borgata Hotel and Casino since 2011. 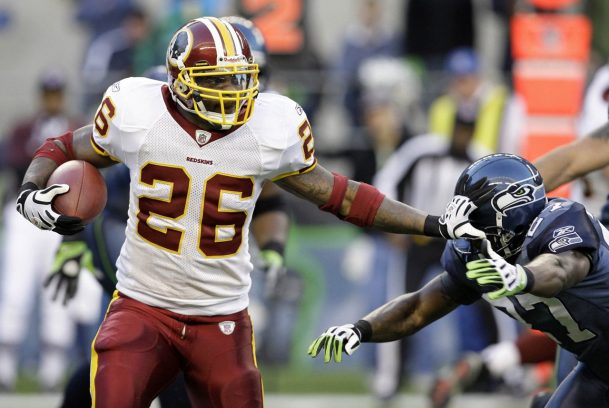 Former NFL star Clinton Portis owes Atlantic City’s Borgata $170,000 from a 2011 gambling debt, and the casino is taking him to court to recoup the money. (Image: redskins.com)

The University of Miami product is attempting to have the debt written off due to his 2015 bankruptcy filing.

When Portis, a former collegiate national champion and All-Pro back, filed for bankruptcy, he had just $150 in his savings account and $4.85 million in debt despite making over $40 million during his nine-year NFL career. He claims he was the victim of a financial scam.

He allegedly attempted to pay off the rest of the debt with bad checks from a bank account that didn’t have sufficient funds. The casino claims that since the former Redskin knew he didn’t have the money when the line of credit was established, he received the funds based on false pretenses and, therefore, shouldn’t have the debt wiped away.

Bankruptcy filings indicate Portis receives $3,500 monthly disability payments and $1,000 a month for freelance sideline reporting. That’s a far cry from the $5 million average annual salary he earned during his nine-year career. In 2004, his third year in the NFL, he became the highest paid running back in league history.

A Murder that Never Happened

Clinton Portis always kept the Washington Redskins organization and fans happy because he consistently performed at a high level on the field.

Off the field, he has quite the checkered past, including a 2013 plan to murder the financial adviser he claims is responsible for his financial problems.

Portis told Sports Illustrated he waited outside a Washington D.C.-area office building for the financial adviser to enter the parking lot, pistol in hand. But the man never appeared, so there was no incident.

When sports journalist Brian Burnsed asked him what would have happened had his nemesis arrived, the NFL star hinted he would have pulled the trigger.

“We’d probably be doing this interview from prison,” he said.

It isn’t uncommon for shady financial advisers to prey on young athletes that don’t have experience investing large sums of money.

Portis says those who were supposed to be responsible for protecting and growing his wealth conned him into making poor investments, including a Ponzi scheme that cost the NFL star $14 million.

One of the Best Backs this Century

Prior to being drafted in the first round by the Redskins in 2002, Portis was a starter and top playmaker for Miami’s 2001 national championship squad. He rushed for 1,200 yards that season on what is considered one of the most talented college football teams in history.

Portis made an immediate impact in the NFL, rushing for 1,508 yards as a rookie in 2002, fourth best in the league. He was one of the few bright spots on a team that finished the season with a disappointing 7-9 record and failed to make the playoffs.

He followed that impressive rookie campaign up with 1,591 yards on the ground the following year, but the team again struggled, going 5-11. Through two seasons, he averaged an incredible 5.5 yards per carry, higher than Pro Football Hall of Famers Barry Sanders and Gale Sayers averaged during their brilliant careers.

His production fell off a bit much of the remainder of his career while injuries piled up, but he still remained a productive back. In 2005, he again hit the 1,500-yard rushing plateau and then 1,487 yards in 2008. Injuries caused his demise in the NFL, and forced him to the sidelines for most of his final two seasons.

In total, he rushed for 9,923 yards and 75 touchdowns. Portis had 2,018 yards receiving, giving him 11,941 all-purpose yards during his brilliant nine-year NFL career. It’s just a shame his football talents haven’t translated to the real world.