Flopped Quads are No Guarantee in WSOP Main Event

It’s going to happen to all but one of the 8,663 players who entered the 2022 Main Event, but there aren’t many worse ways from the year’s biggest tournament by losing after you’ve flopped quads. 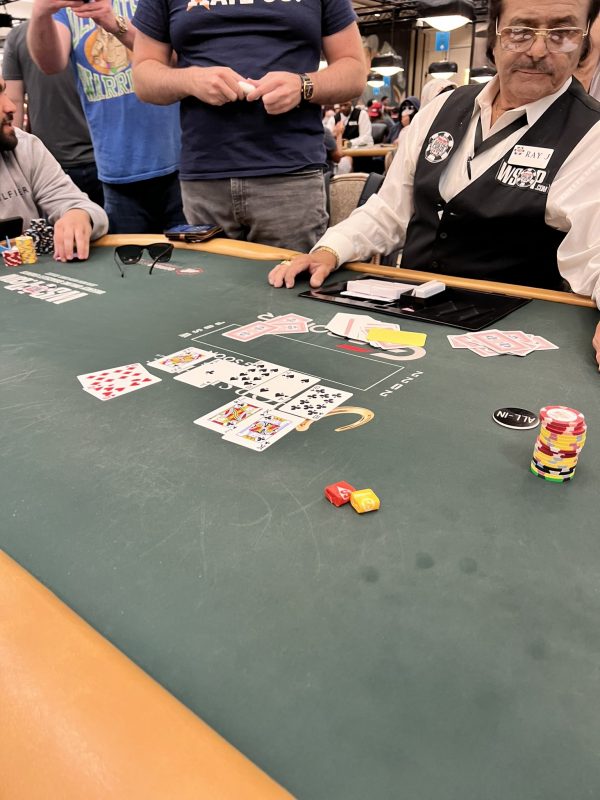 There’s nothing like having your long shot come in to survive an all-in during the Main Event. (Image: Michael Scoma)

Kenny “SuperTuan” Nguyen will remember the beat he took for the rest of his life when he did just that and lost to a straight flush on the river on Sunday.

It’s unclear as to how early action in the hand went, but all money got into the middle on the turn after Nguyen’s opponent hit his flush with 7♥ 8♥ on a board that read 6♥ 6♣ T♥ K♥.

Nguyen’s prayers were answered when the flush hit on the turn because he was sitting pretty after flopping quad sixes. But, the poker gods giveth, and the poker gods taketh away, which is exactly what happened when the dealer exposed the 9♥ on the river, sinking the quads and sending the two-time WSOP Circuit winner to the rail and into a fit of laughter.

A video of the bloody aftermath was posted on Reddit.

With so many hands being dealt during the World Series of Poker, there are plenty of chances for quads to be cracked.

Michael Scoma survived an all-in on his first day against flopped quad 10s when he rivered a royal flush holding K♣ J♣. He needed runner-runner A♣ Q♣ to get there.

I rivered a royal flush vs. quads. I believe the odds of that happening are 1:2.7 billion. #WSOPMainevent #wsop2022 #wsop pic.twitter.com/cinkRsCjE8

How bad was the beat, really?

While it’s not an exact comparison, the math wizards online have calculated that quad aces losing to a royal flush is about 1 in 2.7 billion. With that in mind, and based on the numbers below, we would guess that quads other than aces losing to straight flush may happen a little more often. Even so, Nguyen’s bad beat described above was pretty bad, no matter how you look at it.

Two-time WSOP bracelet winner Cliff Josephy mentioned it in a mini-report he shared on Twitter, also reporting that a player on a neighboring table lost with quads to quads, showing that these beats sometimes even amaze well-seasoned pros who’ve seen it all.

This is what I've seen so far today @WSOP Main Event. Royal Flush over quads, quads over quads(both hands at adjacent table), and then a guy at my table tossing his chip in the pot and it landing on its side pic.twitter.com/Hp9CsKdTfK

Early in last year’s Main Event, Chang Liu’s flopped quad fours got destroyed when Ozgur Secilmis turned his pocket sixes into quads on the turn. All the money went in the middle, and Liu stumbled to the door like a man who ate Mike Tyson’s left hand.

Secilmis used those chips to get him to the final table, where he finished fifth for $1.8 million.