The Rio All-Suite Hotel and Casino in Las Vegas is working to reassure present and future guests that they have contained the threat of Legionnaires’ disease in its water supply. 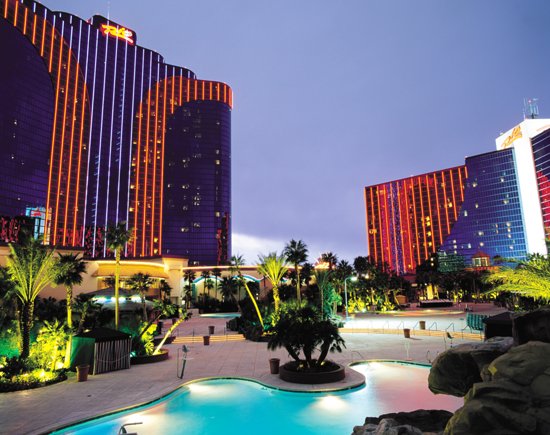 One of the two towers at the Rio in Las Vegas has had the presence of Legionnaires’ disease in the water system. Officials are working on eradicating the bacteria. (Image: Tripadvisor)

Hotel officials confirmed Tuesday that the Rio’s water has been disinfected, but said it will take another couple weeks for test results before regional health officials can certify the property as bacteria-free.

These tests follow a revelation last week from the Southern Nevada Health District that two cases of Legionnaires disease, in March and April, were traced back to stays at the Rio.

This health scare happens to come during the busiest time of the year for the Rio, during the World Series of Poker, when more than 50,000 people will descend on the Rio over a two month period in the summer, sitting together in large confined spaces trading dirty casino chips.

Legionnaires’ disease is a bacterial infection spread through water vapors that can manifest in pneumonia-like symptoms, including coughing, wheezing, shortness of breath, headaches, muscle aches, and fever. It’s caused by the bacterium Legionella pneumophila and can usually be treated, but in some cases can also lead to death.

Officials from Caesars Entertainment, parent company of the Rio and owner of the WSOP, confirmed that the bacteria had been confined to one of the Rio’s two towers (they wouldn’t say which one) and four bathrooms, with guests who were staying in potentially affected areas relocated.

The Rio’s water was tested by the Southern Nevada Health District last week, confirming the presence of Legionella, and hotel officials began a process of chlorine disinfection.

Remediation consists primarily of flushing the pipes in affected areas with high-temperature water and chlorine, then running tests to make sure all traces of the bacteria are eliminated.

So far there have been no new reported cases from the Rio, but health officials say they are waiting to see if any new cases emerge, as their announcement via press release last Friday could alert people who otherwise would not know what might be causing them to be sick.

Because it takes up to 14 days to show any signs of infection, there could be additional people who disclose they were exposed after stays at the Rio.

Legionnaires’ disease is often under-reported and under-diagnosed. In Las Vegas it could go undetected as people who contract the condition return home, and wouldn’t necessarily inform Las Vegas casino or health officials about the places where they might have contracted the bacteria that led to their sickness, which often is dismissed as pneumonia or the flu.

Legionnaires’ often spreads in large buildings where people share a lot of breathable air in confined spaces, but does require actual water droplets or vapors to transport the bacteria. Sources can include showers, hot tubs, faucets, cooling towers, misters, and decorative fountains.

Are they doing anything for these people? I stayed there for 10 days in march/april in the contaminated building where the bacteria was located, within two days I was having problems breathing, fatigue, headaches and issues with my stomach.

Which building did you stay in?

Hi Debbie, you can also contact the Southern Nevada Health District directly at 702-759-0999. Supposedly they will be happy to take your call and offer guidance accordingly.