The forthcoming European Poker Tour (EPT) in Sochi has been postponed due to the war between Russia and Ukraine. 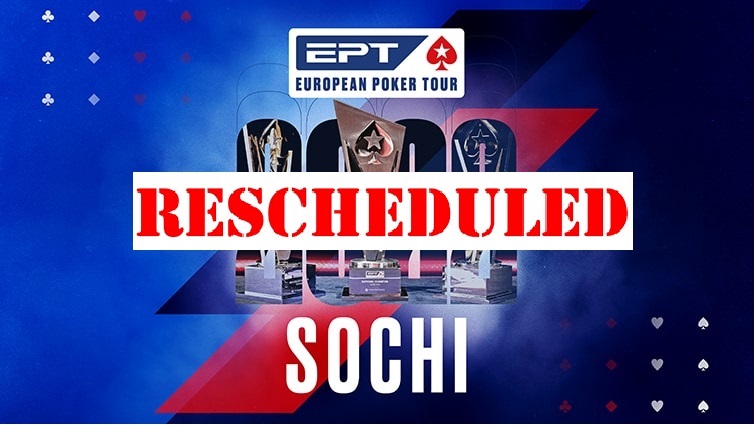 EPT Sochi has been postponed and will now take place in October due to the military conflict between Russia and Ukraine. (Image: PokerStars)

PokerStars’ series was due to take place at Casino Sochi between March 18 and 27. As well as a $2,000 main event, the schedule featured an EPT National tournament, a high roller, and the Sochi Cup.

CardsChat spoke to a PokerStars’ representative about the postponement. They confirmed that EPT Sochi has been rescheduled with immediate effect.

The series is now scheduled to take place Oct. 1 – 10, barring any further issues with Russia or its surrounding countries. Players who have won an EPT Sochi prize package, or those who have already bought into events, should contact live@pokerstarslive.com.

The decision to reschedule EPT Sochi comes in the wake of Russia’s attack on Ukraine. Under the orders of President Vladimir Putin, Russian troops attacked multiple Ukrainian cities in the early hours of Feb. 24.

The Russian President described it as a “special military operation” designed to “demilitarize and de-nazify” neighboring Ukraine. The rest of the world, including the US and UK, saw it as a declaration of war and, as we speak, the situation is escalating.

Although a full-scale war may yet be averted, thoughts are already turning to the dangers of traveling to Ukraine and Russia. Ukrainian airspace is closed to commercial flights, and the European Union Aviation Safety Agency (EASA) has said that flying within 100 nautical miles of Russia and Belarus is a risk.

Canceling a poker tournament isn’t even a minor concern in context, but a war between Russia and Ukraine has made it unsafe to host an event at Casino Sochi. It may also destabilize large parts of Europe if the conflict escalates further.

PokerStars’ EPT Prague is due to start on March 5. Although the Czech Republic is over 850 miles from Ukraine, air travel could be severely disrupted. Players may also avoid traveling due to personal safety concerns.

The Belgique Poker Masters in Bratislava could also see attendance figures drop due to the war in Ukraine. Although the small stakes series is traditionally attended by locals, people from neighboring countries do travel to the Slovakian capital to play.

Host venue Casino Banco is still advertising the event. However, with Slovakia sharing a border with Ukraine, and the situation changing by the hour, it may yet become a casualty of the conflict.

Poker is an afterthought at a time like this, but Europe’s live tournament schedule could be entering another period of uncertainty after two years of cancellations due to COVID-19.

I will not reward Russia with my tourist dollar; and will boycott them until and unless they cease their invasion of Ukraine. I urge all decent poker players to do the same.

I am closing my PokerStars account due to the continued presence of Russian and Belorussian players on line. The message needs to get out that it can no longer be business as usual!