A Doug Polk feud with Daniel Negreanu may have reached new levels of pique Thursday night when he referred to poker’s all-time winningest tournament player and first-ballot Hall of Famer as an “embarrassment to poker” on a live YouTube podcast. 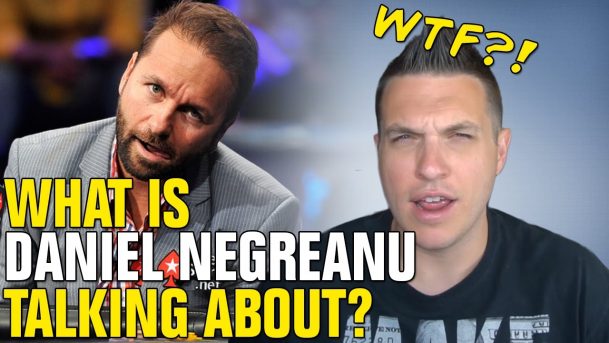 Daniel Negreanu (left) and Doug Polk (right) seem to have less and less love for each other these days, with Polk seeming to make it personal. (Image: YouTube)

Multiple times the past week, Ingram has alleged widespread cheating occurs at Americas Cardroom, a relatively popular US-facing online poker site. Ingram alleges that numerous bots are infiltrating the games on ACR. He hasn’t provided much hard evidence, but suggests ACR allows previously banned accounts to continue playing, and says that collusion is a major problem on the site.

But the biggest “bang bang” in Polk and Ingram’s exchange came when the two started talking about Negreanu.

“He’s a massive hypocrite and, frankly, he’s an embarrassment to players and the game of poker,” Polk said.

Leading up to that comment, Polk had dissed Kid Poker for “shilling” for PokerStars. For the past year, Polk has criticized Negreanu for supposedly claiming higher rake is better for players.

Polk followed up the insult by accusing Negreanu of being “petty.” It’s unclear what sparked Polk to randomly bash a player that many consider to be a living legend, but it may have been caused by a recent tweet in which Negreanu said he loves “this game” and plans to be a “lifer,” unlike some players (i.e. Doug Polk) who have left the game for other ventures, such as cryptocurrency.

@RealKidPoker: “Many people come and go in the poker industry, moving on to other things, but I am a lifer. I love this game and plan to play a big role in the poker community for the rest of my life. I have lots of passions, but poker will always be #1”

Polk responded to the tweet in the podcast, saying, “Dude, honestly, shut the f*ck up, honestly. It’s so absurd. He’s getting paid millions of dollars to be a hypocrite and tell you why taking your money is good and why he should take more of your money, and then also trying to be the good guy. You don’t get to be both.”

Ingram wasn’t ready to wholeheartedly concur. “I wouldn’t go this far,” he said. “You know I’ve got a lot of respect for Negreanu. He brings in a lot of people (to poker).”

Polk may have a right to his opinion, but there may not be any other player in history who means more to the game than Negreanu, who has one of the largest social media outreaches in poker, with more than 450,000 Twitter followers and 164,000 YouTube subscribers, not to mention the ear of casino executives.

He’s also been the face of PokerStars, the world’s largest online poker site, for more than a decade. And, let’s face it, the reason he often sits at a televised feature table is because many poker fans enjoy watching him play.

Yet for some reason with Polk, who spent much of last week on Twitter dismissing alarms from skeptics about Bitcoin’s latest plunge, Negreanu seems to rub a raw nerve.

Doug polk is weird, who is he to Danny boy? Just a nub.

When you bash someone, you better be correct.

It appears that Polk is upset claiming Negranu made statements that a higher rake is better for the player. That in itself does,not sound correct. However, before i jump all pver Negeanu for it, i’m going to want to hear his reasons for such opinion

Its not like polk is a nobody, he has been one of the very best HUNL players in the world through some of the years in which poker has required the most skill.

We also tend to forget that pur idols are people too and not some infallible god. Negreanu is a person just like any other.

this happened almost a year ago, DNEGs is paid by pokerstars and Pokerstars has for the last 2 years raised the rake and took away player benefits. The whole time this was happening Daniel kept telling everyone that “good news” is right around the corner. Of course the only good news is Poker stars gives players “chests” to open even though they are mostly empty.

Doug’s biggest problem with Daniel is that while Daniel is making millions from Pokerstars he claims to be a friend to the poker player, which he clearly is not. That is why he is called a hypocrite.

Yes, he has drawn many people into poker and remains a popular player but he is making money from Pokerstars not playing poker Sadly.