Daniel Weinman received the ultimate birthday gift. No, it wasn’t an all-expense paid vacation to a secluded island or a new car. Instead, he got what every poker player really wants: a WPT title and a boatload of cash. 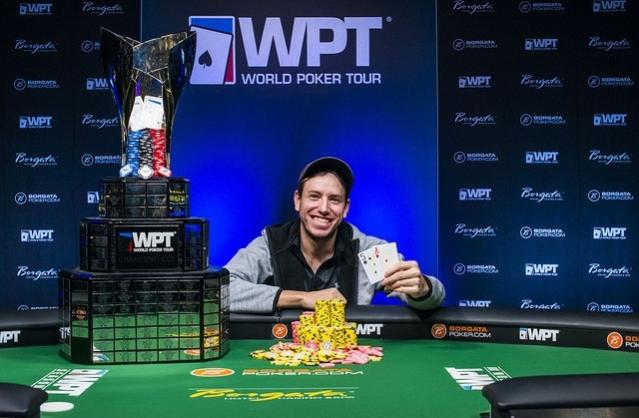 Daniel Weinman of Georgia took down the 2017 WPT Borgata Winter Poker Open in Atlantic City for the best cash of his poker career. (Image: WPT)

The Georgia native won the Borgata Winter Poker Open in Atlantic City for $892,433. He is now a member of the WPT Champion’s Club and will have a seat in the season-ending Tournament of Champions come April.

“I turned 29 today, so this is a pretty awesome birthday present,” the champ said after scooping the event. “My girlfriend flew in last-minute, you couldn’t have scripted it any better,” Weinman added.

Nathan Bjerno was the runner-up. He took home $524,964, bringing his career live tournament earnings over $1.3 million. The California resident, late in heads-up play, attempted an unsuccessful bluff for a large portion of his chips.

Weinman made a tough call on the river with nothing but a pair of fives on a dry board. That hand helped propel the Georgian to victory.

Weinman isn’t accustomed to playing in World Poker Tour events. The tournaments he plays are mostly for the World Series of Poker. Afterwards, he said it was a “great” feeling to step outside the WSOP to play in a “prestigious tournament like this.”

He doesn’t have a Series bracelet, not yet at least. But he does have a Circuit ring, 21 career cashes at the summer series in Las Vegas, and a total of $866,849 in the world’s largest poker event each year.

His Circuit ring came in 2015 at Harrah’s Cherokee in North Carolina. During the 2016 WSOP, he cashed eight times, including a 7th place finish in a $1,500 Razz tournament.

Season 15 of the WPT concludes in early April with the Tournament of Champions, an event for past winners only. There are still some major events on the schedule between now and then.