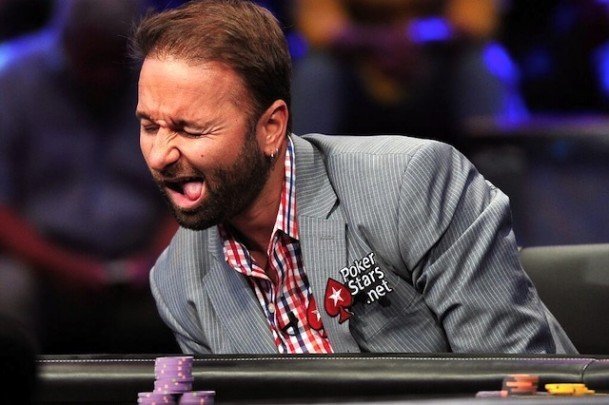 We’re not sure what was happening in this picture exactly, but Daniel Negreanu’s TDA General Summit address tirade may have caused him to become persona non grata at future gatherings.  (Image: pokerstrategy.com)

Daniel Negreanu ruffled some feathers at the Tournament Directors Association (TDA) General Summit at Aria in Las Vegas over the weekend, delivering an address that must have left some members regretting inviting such an outspoken player into their midst.

Negreanu was there to address some important points about the penalties that have, he feels, become far too prevalent in the modern game, and are distributed without sufficient discretion.

“In all sports, the best referees are the ones that you hardly notice,” began Negreanu, implying in his very first sentence that TDA members were not of that ilk. But that was just the beginning of his thoughts.

“[These referees] are not at the heart of every controversy; they’re not ruining the game, and they do their job effectively,” he continued, suggesting in his tone that he might be a tad sardonic with that pronouncement.

In fact, most “referees” would have sent him off for dissent at this point, but the TDA are actually quite reasonable, so they listened patiently.

“What is the role of a tournament director?” he demanded. “What industry are you in? First and foremost: customer service. The players are not inmates and you’re not prison guards.

“Let’s be clear,” Negreanu expounded. “It’s the players who pay their buy-ins … that ultimately pay the paychecks of everyone in this room, for the most part.”

Having ensured that TDA members were aware of their place in the poker hierarchy, Negreanu made some important points, held by the majority of professional players, that certain rules are far too rigidly enforced.

He gave the example of an amateur playing Omaha, who flops two pair in late position. The river card makes a flush and the amateur is checked to, and checks behind, not realizing he has the nut flush. Not only is this player punished by his own mistake, losing value, he’s also going to get a one-round penalty for checking the nuts on the river. This type of scenario seems “silly,” according.

While this rule was created to guard against collusion, Negreanu’s gripe is that in the overwhelming majority of cases where it is applied, it’s simply a case of player error. And it’s the amateur, recreational players who are being penalized, because the pros generally don’t make these mistakes.

“Penalties are given rampantly for situations that are not breaching the integrity of the game, they are simply player errors,” he said. “When you approach a situation where you’re looking at a penalty that you think should be assessed. Approach it this way. ‘How can I justify not giving this persona penalty?’ How can I justify saying, ‘this person probably wasn’t cheating. I’ll give him one warning.”

TDA director Linda Johnson denied that the examples were automatic penalties. Auto-penalties in these situations were not a TDA rule, she said, and discretion was always advised.

“You keep saying they’re automatic penalties and they are not,” she said testily, perhaps mentally scratching Negreanu off her Christmas card list.

“They are given automatically,” retorted Negreanu. “I’ve never seen discretion used, not once.”

All Hands on Deck

Negreanu then turned to another issue that bugs him, the “first hand off the deck” rule (FHOTD), which states that: “A player must be at his seat when the first card is dealt on the initial deal or he will have a dead hand.”

“Is this the stand?” he asked. “Is this the one issue that is so beholden to you, that you care so much about that you’re willing to sacrifice customer service and what the players want, to stand in that position?” Ouch.

He accused TDA director Neil Johnson (no relation to Linda, to our knowledge) of “superiority, condescension and arrogance” for his alleged assertion on Twitter that FHOTD was “a better rule” than other suggestions.

“Who crowned you the king of all poker knowledge?” demanded Negreanu.

The next General Summit will be held in two years, as is the TDA tradition, which will give the assembled party time to recover from the bombast. We are guessing Negreanu’s invite may get lost in the mail somehow.

What Negreanu is saying is more true than not….The real case with TD’s is that they do not have the same set of rules – varies on “who” the TD is…rulings are very different dependent on the TD – They are unable to get to the real issue…ask anyone at the table and you’ll get many different answers…so, where do you get the real answer…probably from the ones at the table not involved in the hand but are afraid to answer. As Negreanu is stating the TD’s and the venue think that they are above everyone and you need to bow to them – for they are God in their domain. Maybe so, but does it need to be that way?

Negreanu is right. Has society become so soft that if anyone speaks their mind forcefully they are seen as a terrible person. WTF, grow up people. He’s absolutely right when he says you are punishing recreational players. The last thing we need is to bring in more pedantic rules to a game that is in steady decline. Rec. players need to feel welcome, not that they are sitting with a bunch of elitists.