Say It Ain’t So! Daniel Negreanu Misses Making November Nine by a Hair as WSOP Final Table Is Set

Daniel Negreanu will not be on your TV sets come November, and you know somewhere right now that ESPN executives are weeping onto their paychecks. 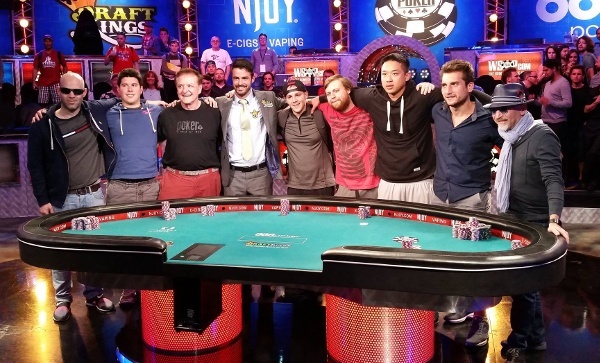 Ready, set, go! The November Nine are in place now for WSOP 2015, and includes some senior citizens this time. (Image: CardsChat.com)

Yup, the 2015 World Series of Poker Main Event has reached its final table, setting up months of anticipation for the November Nine. But while there will be plenty of discussion and analysis about the nine players still fighting for poker immortality, most of the talk on the last night of the WSOP this summer was about the player who didn’t quite make it to the final table. 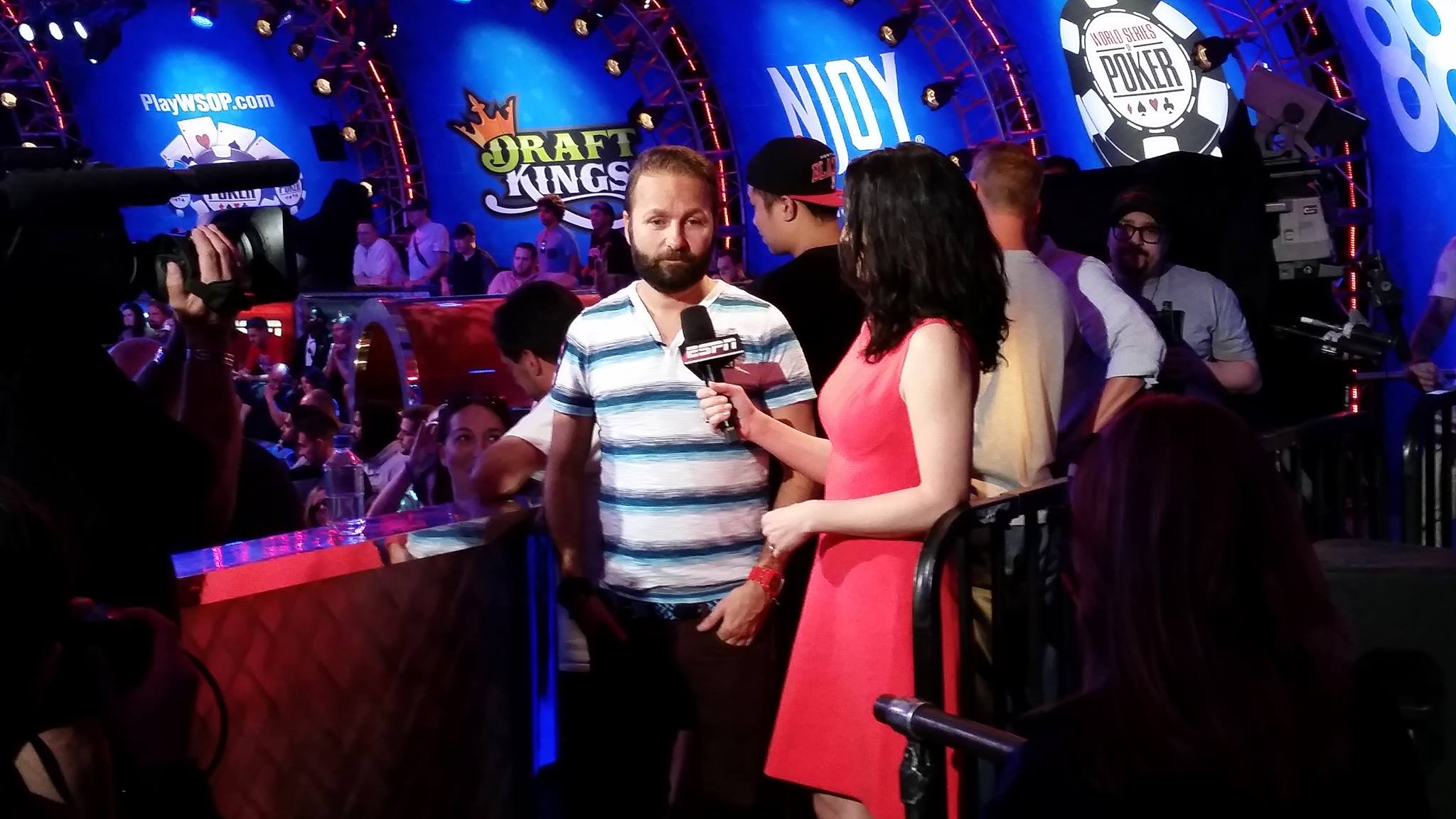 So close and yet so far: Daniel Negreanu looks slightly dazed at his post-elimination interview. The poker superstar was knocked out of the Main Event in 11th place, leaving fans and event producers crushed. (Image: CardsChat.com)

Daniel Negreanu was poised to become the biggest Main Event final table draw in years for the WSOP, and it showed on Tuesday. Throughout the day, which began with three tables, Negreanu drew an overflow crowd to the Main Stage, where spectators cheered his every victory throughout the day.

By the evening, when Negreanu was fighting to hang on to a short stack, hundreds of fans were getting the best views they could of one of poker’s most famous and illustrious faces. Media members speculated about what a Negreanu appearance in the November Nine would mean for poker, while Kid Poker himself did a set of pushups on the stage between hands while the rail counted along with each rep.

But just as his accession to the final table appeared to be destined to happen, Negreanu’s magical run came to a sudden end. 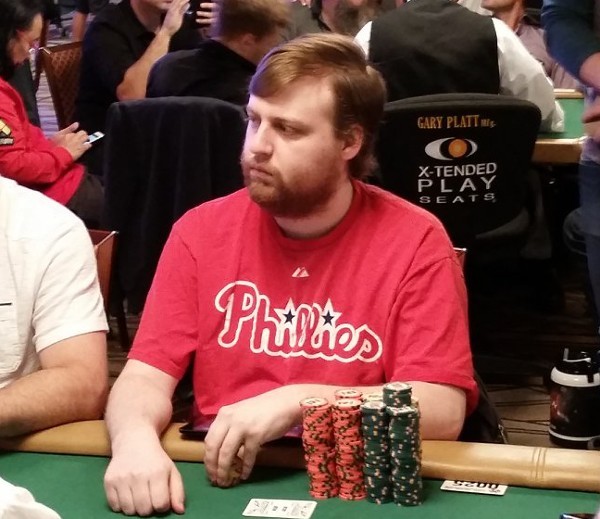 On an A♦K♣T♦ board, Joe McKeehen made a bet of 700,000, only to watch Negreanu move all-in for over 5.8 million. McKeehen called, and the hands were revealed: Negreanu had A♠4♦ for top pair, while McKeehen had J♦3♦, giving him both straight and flush draws.

When the turn came the 3♥, it was clear that McKeehen had loads of outs. The dealer flipped over a Q♥ on the river, and the audience’s disappointment was palpable as Negreanu had been eliminated by a straight.

Negreanu earned $526,778 for his finish. After busting out, the Canadian poker legend said that coming up just short of the final table stung, but that it wasn’t nearly as disappointing for him as it was for his many fans in attendance.

“As much as I wanted to go for the win, I’m more just playing for my fans than for the November Nine,” Negreanu said to reporters. “Whether I come seventh or 11th, it isn’t really relevant to me, because it’s all about the win. But I know for the broadcast, it would have been great.”

When the remaining ten players merged to create the unofficial final table, there was no telling how long it would take for the final elimination before the November Nine would take shape. Josh Beckley got his money in on a coin flip, but found the cards he needed to survive; then Alex Turyansky was nearly eliminated, but saw a double-paired board give him a chop to keep him alive.

Just 22 hands into final table play, however, Turyansky’s luck finally ran out. He got all-in preflop with AK against McKeehen’s pocket queens. The flop and turn provided no help, but did give the entire room a sweat for yet another chop, as the 7658 board threatened a straight. But when a jack hit the river, it was all over: Turyansky had earned $756,897 for 10th place, while the remaining nine players broke into celebration, having all become millionaires for making the November Nine.

When the final table reconvenes in November, the clear favorite will be McKeehen. The 24-year-old professional poker player has amassed an incredible 63.1 million in chips, giving him more than double what any other player at the table has.

McKeehen has two WSOP Circuit wins on his resume, as well as eight WSOP cashes, one of which was a second place finish in the 2014 Monster Stack.

“I have so many chips, it’s so exciting,” McKeehen told reporters after the final table was set. “But it’s going to be a long tournament, because there are still so many big blinds on the table. All of these guys are really good, and the only way I’m going to win is if I stay on top of everything.” 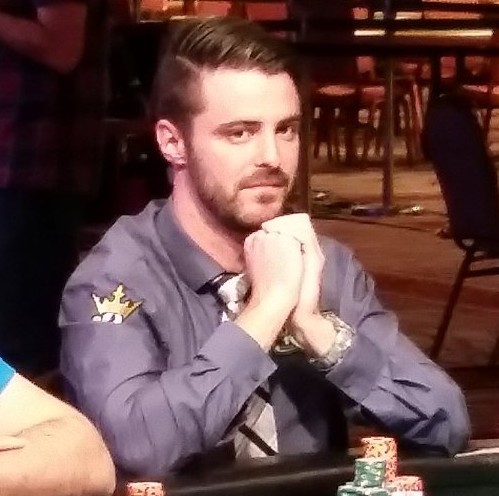 Max Steinberg will be a strong contender in a dynamic field come November. (Image: CardsChat.com)

Perhaps the player with the strongest resume at the final table will be Max Steinberg. He’ll come into the final table with 20.2 million chips, good for fifth place overall, and has already won one WSOP gold bracelet, though he said making the Main Event final table already feels like a bigger accomplishment.

“Winning a bracelet is great, but this is something that you dream of,” he said. “I never even fathomed doing this, so it’s pretty amazing.”

When asked about his plans to prepare for the final table, Steinberg said that he would probably spend much of his time working on what got him into the Main Event in the first place.

“I think I might try to find a coach,” said Steinberg, who won his seat in the Main Event by winning a satellite through DraftKings. “I probably won’t be traveling the tournament circuit, and instead focus on daily fantasy.”

Another popular figure at the final table is sure to be Pierre Neuville, the 72-year-old Belgian who is best known for his regular appearances at European Poker Tour events. In an era dominated by younger players, Neuville says that poker has helped keep his mind fresh.

“I think that poker keeps me alive,” said Neuville, who will come into the final table with just over 21 million chips. “It gives me a younger mind than many people my age.”

Neuville shattered the record for the oldest player ever to reach the November Nine, which was previously held by Steve Gee, who was 57 years old during the 2012 final table. But amazingly, Neuville isn’t even the only player this year who broke that record.

61-year-old Neil Blumenfield has also made it to the November Nine, and will take 22 million chips with him to the final table. Blumenfield, who had just two previous WSOP cashes before this year’s Main Event, had a very succinct answer when asked whether he played poker for a living.

The rest of the final table features players from a variety of different backgrounds and nationalities. Zvi Stern may be the one best positioned to give McKeehen a run for his money, as he is in second chip position with 29.8 million. Stern, who is from Israel, had only one WSOP cash before reaching the November Nine.

At age 23, Thomas Cannuli is the youngest member of this year’s final table. He has two previous WSOP cashes, and will come into the November Nine with 12.25 million chips.

Josh Beckley, who will have 11.8 million in chips, is another young player at the final table. The 24-year-old has cashed four times at the WSOP, with all of those cashes coming this summer.

Also with four cashes in his WSOP career is 26-year-old Patrick Chan, who has just over 6.2 million in chips. Chan had over $500,000 in career tournament earnings before his run to the final table.

Finally, there is Federico Butteroni. The 25-year-old Italian may be the short stack with 6.2 million, but he made it clear that he’s excited to make the November Nine no matter what position he finds himself in.

“I don’t care how many chips I have, I can do anything,” Butteroni said after the November Nine had been set. “We were 6,400, and now we are just nine.”

For reaching the final table, each player still in the field earned the ninth place prize of $1,001,020, which should be enough to tide them over until they play down to a champion in November. The final table will resume on November 8, with three days of play being broadcast nearly live on ESPN.

In the meantime, the players will be spending the next four months preparing for what will likely be the highest-stakes poker most of them will ever play. The prize at the end of the rainbow is $7,680,021: something that will probably give the November Nine plenty to think about and more than a few sleepless nights between now and then.

I wish Daniel would have made the finial table. It would have been best for business.

Looking forward to the November Nine, will be watching on ESPN. Will this event be on Pokerstars tv? Does anyone know?