Doug Polk and Daniel Negreanu have long feuded on social media, but they were surprisingly respectful toward one another during Wednesday’s live-streamed heads-up match. And although many were hoping they’d trade verbal jabs throughout the evening, the cordial demeanor both players displayed was refreshing. 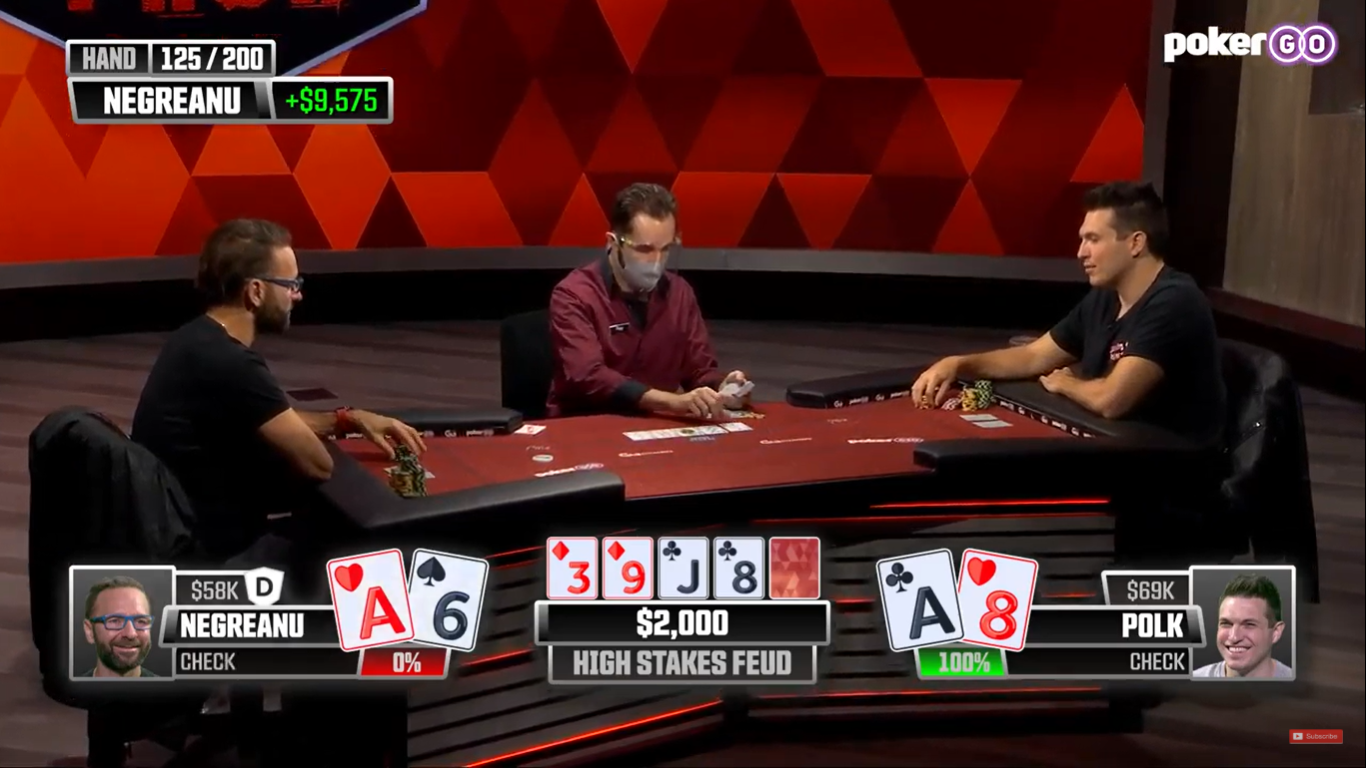 The rival poker pros squared off for 200 hands of heads-up No-Limit Hold’em on PokerGo. They played $200/$400 stakes in Las Vegas at a physical card table. The rest of the match — as many as 24,800 additional hands — will shift to the WSOP.com poker site beginning Friday.

During the opening session, Negreanu was more than competitive against his heavily favored opponent. The GGPoker ambassador won more than $110,000 over 200 hands of live poker. But it’s way early in the match, and the remainder of the contest shifts to the internet, which is right in Polk’s wheelhouse.

Who Knew Negreanu and Polk Could Get Along?

If you tuned in hoping to hear the poker stars go at it verbally, trading insults and talking trash all night, you may have been disappointed. They instead spent most of the four-hour session cracking jokes and telling poker stories. And, quite frankly, that’s the way it should have been.

Poker, like sports, needs its rivalries. That’s how you build intrigue and grow the game. But rivals, even if they don’t like each other, don’t have to be nasty toward each other to make it fun and exciting for the fans.

Duke and North Carolina, college basketball’s most intense rivalry, despise each other off the court. On the court, they want to beat each other more than any other teams. But if you ask Carolina coach Roy Williams or Duke coach Mike Krzyzewski what they think of their rival’s program, they’ll show respect.

“The bottom line is, there’s a tremendous amount of respect,” Williams told the News & Observer in 2018. “I think no one has more respect for what Mike Krzyzewski’s done at Duke than Roy Williams. Does that mean we agree on everything? No.”

Polk, after years of publicly bashing Negreanu, recently made a similar comment on Twitter about his long-time rival.

I have to say, I am impressed that Negreanu has actually stepped up to the plate here and is playing a HUNL challenge taking the worst of it. Not many people have the balls to do that. Its a very complex game for a lot of money and he is willing to put it on the line.

Good for the Game

Polk and Negreanu being cordial during the opening session was good for the game. It showed that poker players, even those who don’t always get along, can act like mature adults around each other in front of a large audience. The PokerGo YouTube video of the match has nearly 400,000 views already.

The entirety of this heads-up challenge will be viewed by many casual poker fans, and not just hardcore regs. Would it really have been a positive moment for the game of poker if Polk and Negreanu, instead of joking around and being respectful, were nasty and insulting toward each other? Certainly not.

Even PokerGo commentators Ali Nejad and Kane Kalas, who both did an outstanding job calling the action, mentioned on multiple occasions how surprised they were at the politeness of competitors given their history. Kalas commented late in the match that it made for a good show. I wholeheartedly agree with that sentiment for the reasons mentioned above.

Polk summed it up perfectly after the match. The Upswing Poker founder wrote on Twitter: “I know a lot of people wanted some IRL drama, but the reality is, we are both there to play. Looking forward to Friday,”