Doug Polk and Daniel Negreanu were, surprisingly, cordial with one another during what was a competitive opening session of their highly anticipated heads-up grudge match. Perhaps, more competitive than some anticipated. 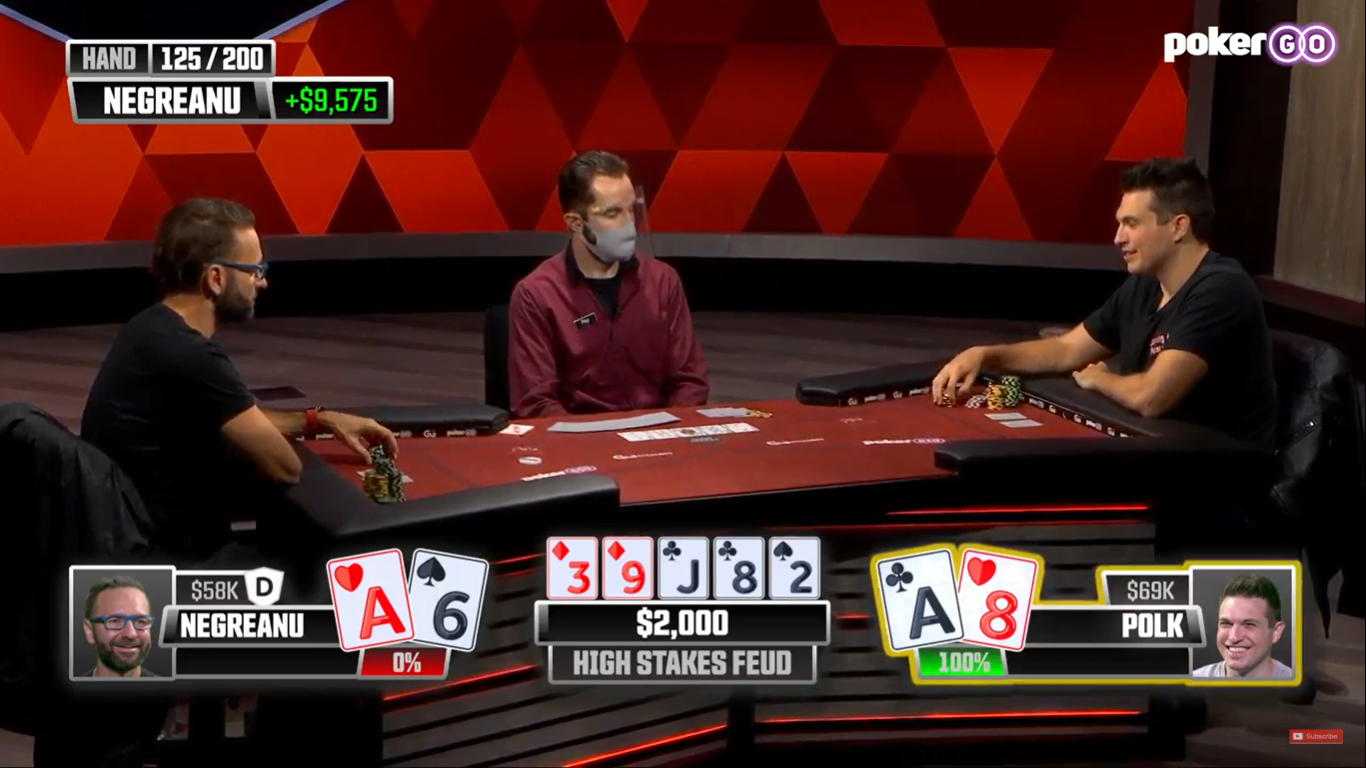 The poker pros played the first 200 hands of a 25,000-hand challenge live at the PokerGo Studio on Wednesday night. They’ll complete the remainder of the high-stakes No-Limit Hold’em competition on the WSOP.com poker site.

We now have a brief glimpse of what to expect from these players going forward. Polk is a heavy favorite, and 200 hands is a small sample size, but Negreanu showed during the first session that he’s not going to be a pushover.

Negreanu used a timely bluff and caught some hands at the right time to win monster pots. Those hands propelled him to an impressive opening session win.

Negreanu Off to Dream Start

Polk and Negreanu are playing $200/$400 stakes with buy-ins of $50,000. With less than 1% of the hands in the books, it’s far too early to make any sort of prediction on who will win, but the GGPoker ambassador has to be feeling good about his start.

The match was highly competitive and without any big swings either way through the first 150 hands (about three hours). Negreanu jumped out to a small early lead before Polk scooped some chips to gain a slight advantage. But it all unraveled late for the Upswing Poker founder.

Negreanu pulled off a huge bluff with king high (K-9) on the river, moving all-in for more than $30,000. The bet forced Polk off ace high (A-Q). Negreanu would go on to win two more big pots in the final 20 hands, including picking off this failed bluff attempt by Polk.

Hand of the day for sure! Congrats to @RealKidPoker and GG to @DougPolkVids ! This will be a fun match! 🔥https://t.co/QKc9ra84RJ

A few hands later, a possibly tilted Polk went for another bluff, firing a check-raise to $19,000 with ace high. His timing was off again, as Negreanu quickly called with two pair. In the end, Negreanu walked away from the PokerGo Studio with a $117,000 profit. That’s the equivalent of about 2.3 buy-ins. Despite the rough session, Polk said he “felt good” about his play.

Felt good about my play tonight despite going -$116,500. Couple hands were slightly loose (first hand of the night I misread the board to be totally honest lol)

Looking forward to not getting stacked bluffing into trips next session.