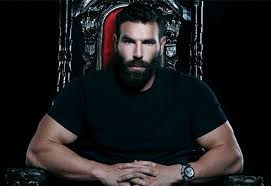 Blitz Poker aims to enable people like you and me to live the lifestyle of Dan Bilzerian via their smartphones. (Image: blitz.poker)

Blitz Poker, the “Dan Bilzerian Lifestyle Simulator” app, has officially landed and is now available to download for Android and iOS.

It has some pretty funny mini-games too, such as the one that poses the question: “What’s cooler than shooting down drones in the desert?” before quickly answering itself: “Probably nothing, so here’s your chance.”

Should your aim prove true in the desert, a whole host of other mini-games can be unlocked, each reflecting the whirl of gun-toting chauvinism that is Bilzerian’s life.

One challenges you to aim dollar bills at a stripper’s G-string, for example, and to drive a jeep filled with bikini clad models at high speed, while earning play money chips to use at the poker table. All very “Blitz.”

The poker games on offer will be familiar to anyone who’s ever sat through the snore-fest that is play-money social poker, which we expect Bilzerian is unlikely to have ever done himself.

“Dan Bilzerian’s Blitz Poker is unlike any Poker game you’ve seen before!” screams the promotional material.

“If you’ve ever wondered what it would be like to live like Dan you’re in luck! Poker, Babes, Trucks, Guns and Cash! Don’t play Poker? We’ve got you covered! Shoot down some drones, undo some bra’s (sic), make it rain and drive home with a truck full of bikini babes! Think of it like a Bilzerian Life Simulator…”

Jackpot Poker is “designed specifically for mobile devices and aimed at casual gamers,” according to the press release, and an extension of its PLAY, its social poker platform on Facebook and mobile.

Spin and Go’s are essentially jackpot sit and go’s, a format first created by Winamax in 2013.

These introduce a lottery style prize pool to the three-handed turbo sit and go format, giving players the chance to win big from a small outlay, provided they can get extraordinarily lucky along the way.

The formula has proved popular with recreational players, and has been a successful means of tempting this demographic back to online poker.

However, many players complain that the jackpot sit and go diverts the fish away from cash games and has done nothing to rescue the online poker economy.

While PokerStars may see a small percentage of conversions from social to real-money poker, the two demographics are largely separate in the eyes of operators and Jackpot Poker will be more about monetizing the “free-to-play” games by offering the usual social gaming rewards and incentives.