The Gardens Casino was quickly making a name for itself on the poker tournament scene at the beginning of 2020. But when Covid shut down the casino, it put a pause to all of that momentum, as well as the budding relationship Gardens was building with the WPT. Now, they hope to pick up where they left off, as their dailies will be returning on Wednesday, Aug. 3, as announced on Twitter by Gardens Casino Tournament Manager Cavin Quintanilla. 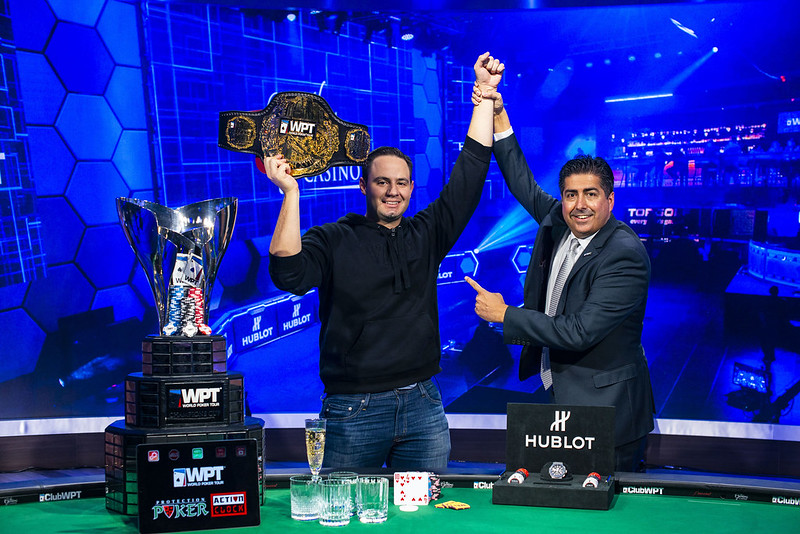 Tournaments will be running on Wednesdays, Thursdays, and Fridays for now, with buy-ins of $130 on the first two days and up to $240 on Fridays. The Wednesday Bounty tournament is similar to the one that was run pre-pandemic but now has double the guarantee. The Friday Event has a $20,000 Guarantee, but pre-pandemic, that tournament would often get $50,000 in the prize pool.

“The feeling of coming back and all the love I’ve received from the players and the Gardens Casino staff has been overwhelming,” said Quintanilla. “There has been a longing throughout SoCal for the Gardens Tournaments to come back, and now that there is a date, you can feel the electricity of anticipation, a buzz regarding Gardens Tournaments.”

Gardens giving their regulars a chance at WPT glory

To spice things up a bit and entice players to come out, Gardens also announced the continuation of a promotion with the WPT they had running before the shutdowns. According to the fine print of the promo, players will get points each time they play a daily event. Those points will help players earn more starting chips for a $30 buy-in satellite on Sunday, Nov 6. Players with 10-20 points will start with 2,000 in chips, while those with 60 points will start with 6,000. 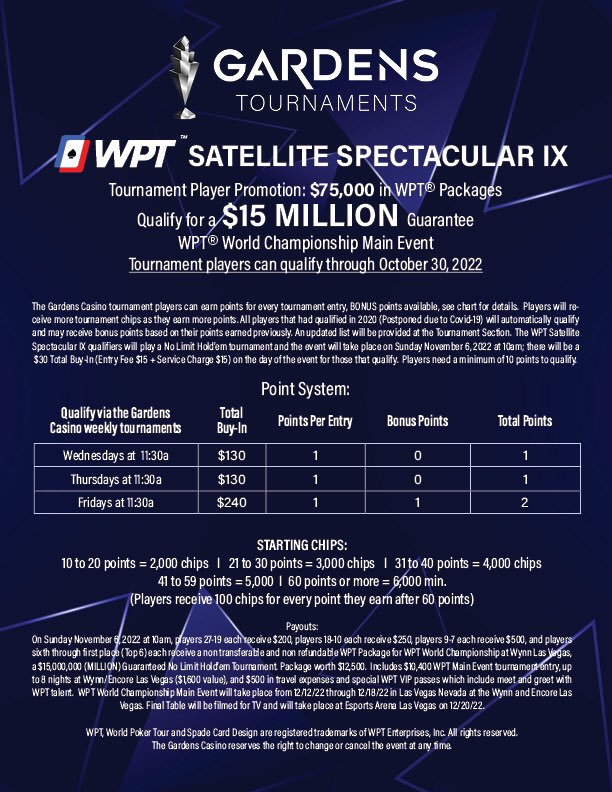 A breakdown of the WPT Satellite Spectacular at the Gardens Casino. (Image: Twitter/@cavincasino)

Every point accrued after that will earn players an extra 100 in chips. For Quintanilla, it was very important to maintain a working relationship with the World Poker Tour, and the daily events seemed like a perfect way to do that.

“All new tournaments will run every week, and all players will earn points towards a tournament player promotion, the WPT Satellite Spectacular, which was cut short back in 2020,” said Quintanilla. “The Gardens Casino will be honoring the players that qualified pre-pandemic as well as giving all players a chance to qualify from August 3rd through October 30th, 2022.”

Bigger tournaments coming down the road

Gardens ran one of the last major poker tournaments in the world before the pandemic when Markus Gonsalves defeated a field of 257 players in the $10,000 buy-in WPT Gardens Poker Championship. Gonsalves earned a career-best $554,495 payday, defeating a final table that included Qing Liu and Chance Kornuth. Quintanilla looks forward to the day that Gardens takes center stage for the WPT once again.

“The Gardens Casino is an official WPT Tournament Room, and the partnership with the World Poker Tour has created great opportunities for the players to win major titles and life-changing money throughout the years. I look forward to that continuing in the future.”

As of yet, Gardens doesn’t have any plans set to run a bigger tournament series, choosing to stick to daily events for the time being. The Bicycle Casino in Bell Gardens has already run a few successful tournament series in 2022, a clear sign that the LA player pool is hungry and ready to get back to the tables. Quintanilla hopes to capitalize on this sooner rather than later.

“As the tournament team prepares for the return of events, I am mostly looking forward to seeing and catching up with all the people, the players. Stay tuned as this is just the beginning of the return of Gardens Tournaments, can’t wait to announce future events.”