Content Sharing Agreement Between New Jersey and Delaware: Could Poker Be Next? 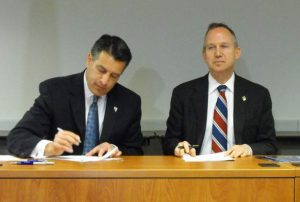 Delaware and Nevada have already agreed to an online poker compact, but a deal with New Jersey would be much more impactful. (Image: Steve Tereault/Stephens Washington Bureau)

Caesars Interactive Entertainment received the blessing of the New Jersey Division of Gaming Enforcement to host some online gambling content for the Delaware Lottery, the first such agreement between the two states.

That raises an obvious question for online poker players: could an interstate compact for sharing player pools be next?

To be certain, the current agreement is a far cry from anything so complex.

Under the agreement, which was announced last Thursday, Caesars Interactive will host games on its data center in Atlantic City which can then be accessed by gamblers in Delaware.

The agreement actually went live on Monday, but officials did not make an announcement for three days in order to ensure that everything was working properly before the public was made aware of the new games available in Delaware.

It appears that the agreement is focused entirely on offering new Internet casino options, particularly in terms of slots.

“We are happy to do our part assisting regulators in New Jersey and Delaware and appreciate their progressive and innovative work to help continue to grow and push the regulated online gaming market forward in the United States,” said Caesars Interactive Senior Vice President Marco Ceccarelli.

It is true that agreements such as these are good for online gambling in the USA: giving companies the ability to share software and data storage across state lines seems to benefit everyone with no drawbacks. But the game that would most benefit from such arrangements is undoubtedly poker.

Unlike other casino games that are played against the house, poker requires opponents to play with; have too few people at an online poker site, and the games quickly dry up.

This has been a problem for Delaware, which has a small population to draw on for its Internet poker tables.

This has led to very sluggish results for Delaware’s online poker network, which brought in just $28,158 in July. That was the third-lowest figure since online gambling began in the state back in November 2013, and marked a significant decline in both monthly and year-over-year terms.

Delaware officials have taken steps in an attempt to address this problem, including signing an interstate compact with Nevada that has seen the Delaware sites and WSOP.com in Nevada (both powered by 888poker) share a single player pool. But while this initially showed some promise, the revenue benefit for Delaware has been minimal at best.

However, a compact between Delaware and New Jersey might offer bigger benefits. According to data collected by PokerScout, the WSOP/888 network in New Jersey averages about 170 cash game players at the moment, more than the 160 averaged by the Nevada/Delaware network.

This suggests that combining the two would essentially double the network’s size.

More likely, a combined network would likely be larger than the sum of its parts: such an increase in player pool size would mean bigger tournament guarantees and more cash game variety, both of which could help with player retention and attraction.

All of that said, there’s still a long way to go before any such agreement could go into place: while New Jersey officials have previously said they have interest in such compacts (both with other states and international jurisdictions), there has been no specific talk about negotiations towards such a pact.

Still, the words of DGE Director David Rebuck on the agreement between Caesars Interactive and Scientific Games suggests that even more cooperation between the states could be coming.