Connor Berkowitz can now take his place among the World Series first-timers club. The New Jersey native will leave Las Vegas almost half a million dollars richer after sweeping the title in the Lucky Sevens event at WSOP 2015. 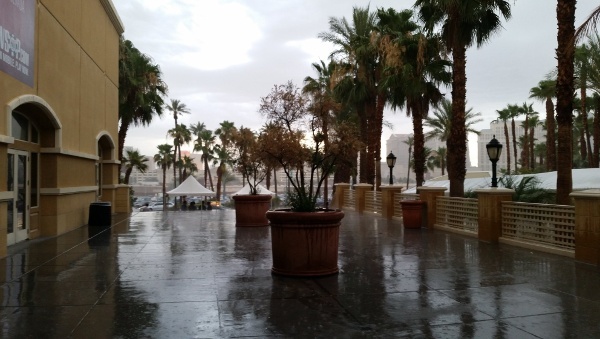 A massive rain storm came down so hard on the Las Vegas Strip on Monday that many Main Event tables at the Rio were flooded and had to be moved. (Image: CardsChat.com)

The World Series of Poker is now officially done with its preliminary event schedule, and all eyes will be focused on the Main Event for the next week, as thousands of poker players fight to become part of the November Nine. Monday saw the second of three starting flights for the WSOP Main Event, as well as an unusual interruption that you might not expect to deal with in Las Vegas.

The second starting flight of the Main Event is always larger than the first. Recreational players flying in from around the world generally want to start their tournament later in order to save a day or two of hotel costs, and the popularity of last-minute satellites means people are more likely to win a seat in time for later flights. Sure enough, Day 1B drew 1,716 players, about 1,000 more than we saw in the Rio on Day 1A.

However, that number may well have been smaller than organizers were hoping for. Last year, 2,144 runners came out for Day 1B, meaning attendance is down about 20 percent this year for the second starting flight.

Overall, there have now been 2,457 players over the first two starting flights, down from 2,915 last year at this point. With Day 1C likely to outdraw the first two starting days combined, the Main Event will have no problem hitting the 5,000 player mark it needs to pay out the top 1,000 spots in the tournament, but it’s likely to fall quite a bit short of last year’s field of 6,683.

As for the action on Day 1B, it was Hamid Feiz who had the honor of bagging the largest stack, finishing the day with 182,675 chips. Notables with big stacks out of the second starting flight include George Danzer, Viacheslav Zhukov, Greg Raymer, Brian Rast, Brian Hastings, and Martin Staszko, all of whom bagged top 100 stacks at the end of the day.

However, the most memorable moment yesterday had little to do with poker, at least not directly. Las Vegas was hit by an intense rain storm late in the afternoon. Although to tourists this might seem like a rare occurrence in this desert city, storms like this are not really uncommon at this time of year (it is, after all, monsoon season).

The rain caused problems not only outside, but also inside the Rio Convention Center, as leaks in the Brasilia and Pavilion rooms led to plenty of tables being soaked. That led to 23 Main Event tables having to be moved into the Amazon room after organizers called for an early dinner break. Yes, the World Series of Poker had a rain delay. 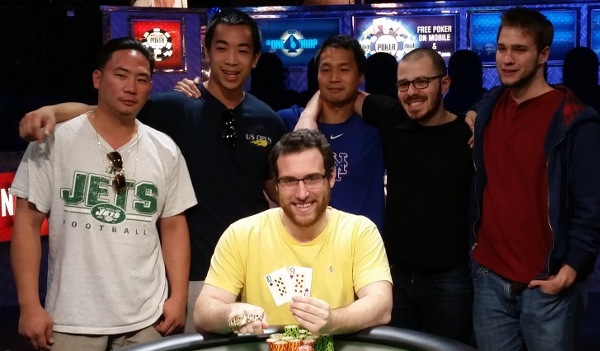 The final preliminary event of the 2015 WSOP wrapped up on Monday, as Connor Berkowitz took down the $777 Lucky Sevens No Limit Hold’em event.

The 25-year-old poker pro from New Jersey won his first bracelet and $487,784 in his first-ever trip to the World Series, cashing (and winning) in just the second WSOP event he entered.

While David Yu had the chip lead for much of the final table, it was Berkowitz who dominated down the stretch. After eliminating Yu in third place, he had a commanding chip lead over John Armbrust, and heads-up play took just seven hands to complete.

“It’s a dream come true,” Berkowitz said of winning a bracelet. “Me and my friends at home have been playing poker since we were 12 years old, when we used to play every weekend. I wouldn’t be here without them, and this is for all of them back there in Manalapan.”

This is the big one: Day 1C of the Main Event. The WSOP will be hard-pressed to beat last year’s Day 1C, when they set a single-day field record for the Main Event by drawing 3,768 players. Still, there will undoubtedly be a massive number of poker players in the Rio for the final starting flight of the 2015 Main Event.

Because there are now just hours left to register for the Main Event, that also means there will be lots of satellites to play in today. And as the day goes on, these satellites will get faster and faster.

If it is anything like recent years, the final hours before registration closes will see players enter into virtual coin flips, with single-table satellites in which each player gets two cards, everyone is all-in on the first hand, and the winning player gets their $10,000 in tournament lammers so that they can run over to the registration cage. The whole process can be completed in about a minute, making it the fastest (if not the most reliable) way to win your way into the Main Event.