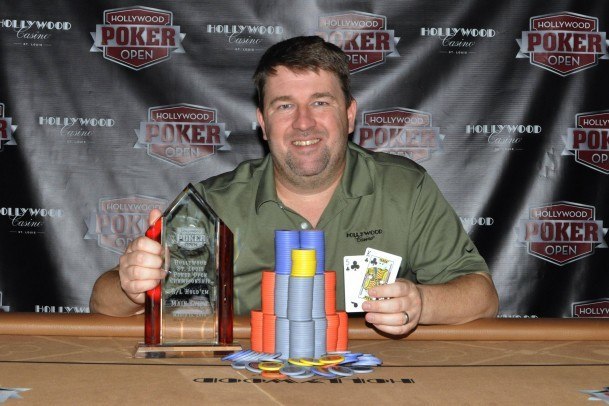 Chris Moneymaker will host the new series of the Hollywood Poker Open when it kicks off next month in Indiana. The former World Series of Poker Main Event champion has been brought on board by Penn National Gaming, Inc. and will be taking part throughout the series.

Season 4 of the Hollywood Poker Open will move among Hollywood Casinos located across the US, and starts with a regional tourney at Hollywood Casino Lawrenceburg in Indiana on November 12. The series then takes in stops in Toledo, St. Louis, and Columbus in Ohio, as well as Charles Town Races in West Virginia.

The Open series culminates with the Tournament Championship at the M Resort Spa Casino in Las Vegas. An estimated $2 million prizepool is expected for the Championship event, with seat winners sent by all regional Hollywood stops.

“I’m thrilled to have the opportunity to host the Hollywood Poker Open tournament series,” said Moneymaker of the hosting gig. “Each year the HPO continues to grow and further cements its reputation as one of the leading poker tournaments in the country.”

Stammen Back After Season 3 Triumph

Expected back among the field on the latest season of the Open is Keven Stammen. The US pro took down the Tournament Championship in June for the Season 3 bragging rights.

For beating a field of nearly 700 runners at the M Resort Spa Casino in Sin City, Stammen won a first prize worth $350,000. That a prizepool of over $1.5 million had been collected for the season finale was a sign that there are enough “hoorays” for the Hollywood Poker Open this time.

In fact, the 700 runners for last year’s showpiece is 69 more than turned out for the HPO Championship event in Season 1. The majority chunk of the $1.4 million prizepool (up from a guaranteed $500,000) was claimed by eventual winner Ana Marquez, a 26-year-old Spaniard who became the inaugural HPO champ that year.

Casual poker players are evidently the target for the HPO organizers. The first regional event in Lawrenceburg takes in 32 events in total, including the $1,115 Main Event. As well as a $235 No Limit Hold’em tournament that kicks off proceedings, a variety of wallet-friendly satellites, Pot Limit Omaha tournaments, and Seniors events are also scheduled.

The addition of Moneymaker is the sign of the growing reputation of the series. It is fast becoming known for allowing amateurs to rub shoulders with big-name stars and solid career pros alike. And despite a somewhat lower profile  in recent years, Moneymaker still retains a place in poker legend for his 2003 World Series of Poker win.

Most recently, he won a Hollywood Poker Open “Deep Stack” event in Charles Town for $3,926, but the PokerStars ambassador has some HPO notches on his belt. He came in third in last year’s HPO Main Event in Tunica before winning the $1,800 Main Event in St. Louis for a first prize worth $36,259, which was Moneymaker’s best tournament result in three years.

The former world champ will be hoping for similar run-good when Season 4 starts in Indiana in November.