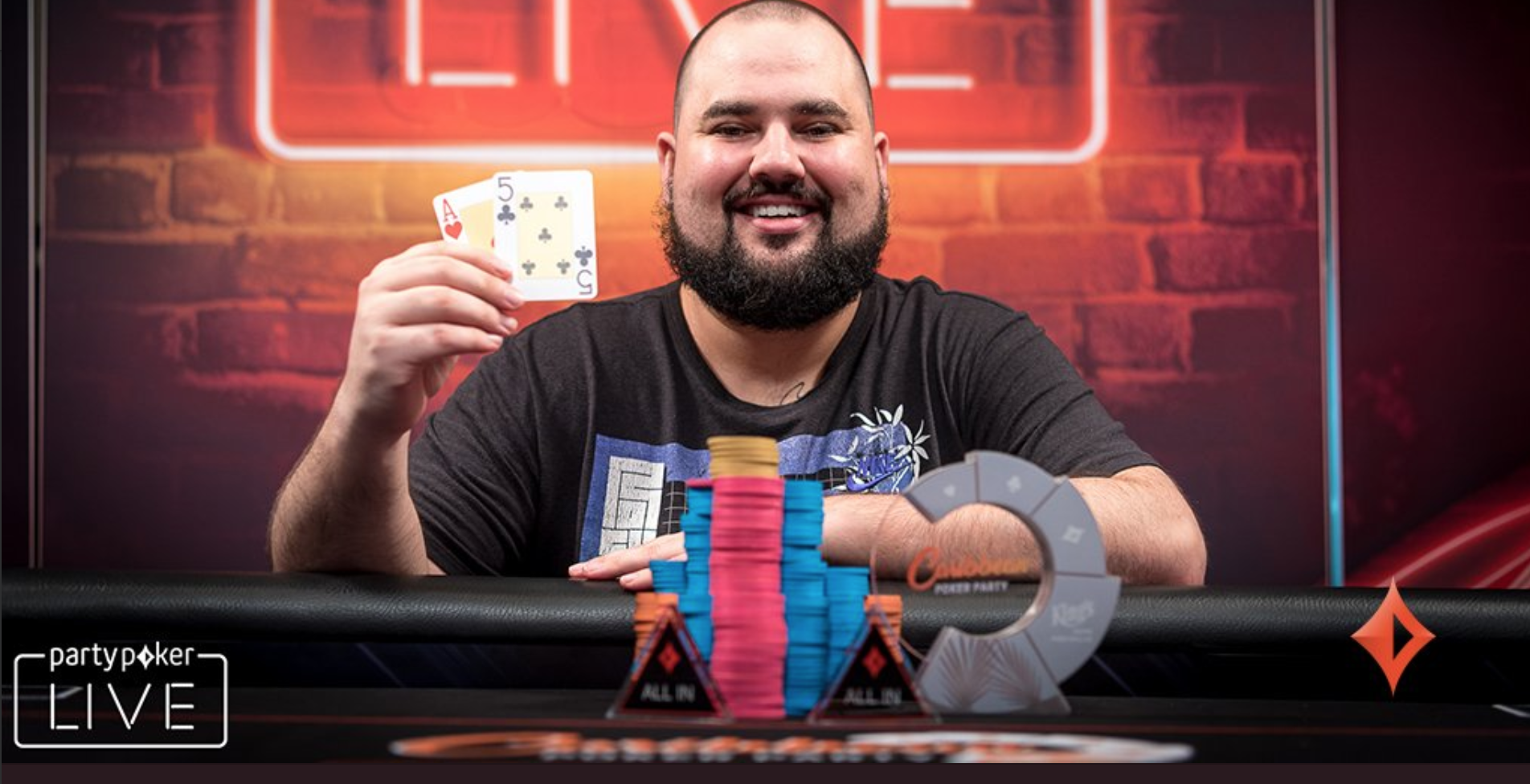 Chris “Big Huni” Hunichen notched the biggest score of his career when he took down the Super High Roller at the Partypoker Caribbean Poker Party in Punta Cana. (Image: partypoker)

The tournament, which took place at the Melia Caribe Tropical Resort, saw 43 entries create a $1,042,750 prize pool. Among those to participate in the tournament were Fedor Holz, Steve O’Dwyer, and Partypoker Ambassador Kristen Bicknell.

It took Chris Hunichen two bullets to do it, but eventually he made it to a stacked final table that included chip leader Sam Trickett, three-time bracelet winner Adrian Mateos, and Poker Masters conqueror Steffen Sontheimer.

Trickett managed to score the first two eliminations and amassed more than half the chips in play four-handed.

Unfortunately for him, he gave a lot back before busting Mateos in fourth place. Then, with blinds at 200k/400k/400k (the big blind had to pay a table ante), Trickett moved all-in for 1.15 million holding the K♦2♦ and Chris Hunichen called from the big blind with the Q♥6♣. The board was good to the Big Huni, with cards falling Q♦J♥8♠2♥6♠. That was all she wrote for Trickett.

Hunichen took a 3:1 chip lead into heads-up play against Sam Greenwood, who had finished third in the $10,300 High Roller days before. In the same level, Hunichen simply shoved the button with A♥5♣, and Greenwood snap-called for 4.275 million with 6♣6♠. Greenwood got it in good, but he was straightened out after the board came down J♦9♣4♠2♠3♣ to give Hunichen a runner-runner wheel.

Greenwood had to settle for second place and a $242,750 consolation prize.

Prior to the win, Hunichen’s biggest cash of $358,677 came this past summer when he finished runner-up to Nadar Kakhmazov in the 2017 World Series of Poker $5,000 NLHE 6-Handed event. If that winner”s name sounds familiar, it’s probably because Kakhmazov had won the MSPT Venetian for $395,888 less than two weeks earlier.

All told, Chris Hunichen now has nearly $2.6 million in live tournament winnings (he ranks eighth on North Carolina’s all-time money list), which is in addition to more than $10.1 million he’s won playing online.

According to Pocket Fives, “Big Huni” has won more than $6.2 million playing on PokerStars alone. In 2015, he was previously ranked the best online poker player in the world, though he’s since fallen to No. 7. His largest online cash of $143,325 came in September of this year on Partypoker, where he plays under the name “thebattler33.” He topped a field of 117 entries to win the Partypoker Powerfest $500K GTD High Roller.

He does look tough . I wouldn’t want to tangle with him on or off the felt !